Christiana Figueres: Protecting the vulnerable is my priority 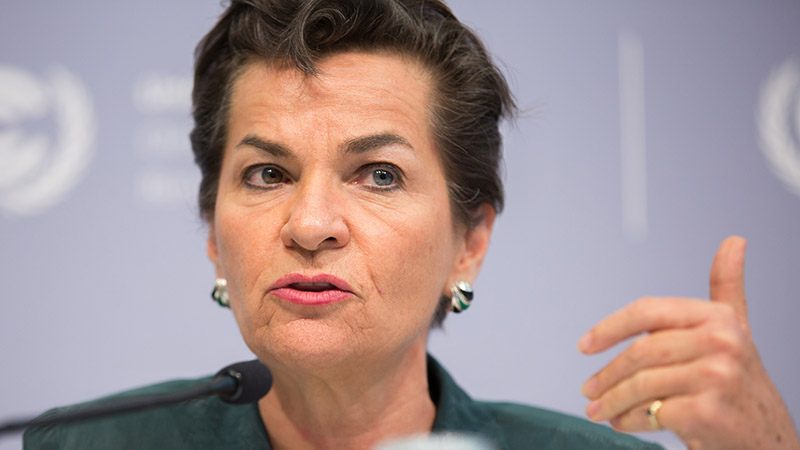 After six years at the helm, the 59-year-old Costa Rican leaves her post as UN climate chief in July. Fresh from steering 195 countries to an historic pact to address climate change, relaxation and holidays should top her agenda.

Instead the veteran diplomat shows little sign of slowing down, or of staying in the climate silo she has dominated since 2010. Her theory of change, focused on embracing diversity and relentless optimism, looks set for a new challenge.

That’s because global warming, she tells Climate Home, is just one part of a wider sustainable development matrix that at its core is a path to alleviate poverty, hunger and drive economic growth.

“I think I have been a hard worker, loyal to principles and values, loyal to the direction we have taken to protect the most vulnerable and afford more to those who don’t have it… that was a guiding light from my father and mother,” she says.

“It happens I chose climate as the battleground to work – but there are many other issues. Clearly there is a connection between national resources, enforced migration and poverty.”

A focus on those vulnerable to rapidly evolving weather systems linked to climate change has been a hallmark of Figueres’ time in office.

The sight of the UN climate chief crying at what she terms the “unfair and immoral” injustice a warming world will heap on future generations has become a potent part of her arsenal.

Emotion is never far from the surface, be it briefing business leaders at the 2011 COP17 summit, addressing the press at Chatham House in 2013 or bidding the UN process farewell in May 2016.

In a sector dominated by complex scientific models and greenhouse gas targets that mean little to the wider public, she has consciously targeted the human face of climate disaster.

It’s a strategy that has accumulated a vast carbon footprint flying the world and visiting communities at risk from rising sea levels, drought, flooding and other disasters. But it’s one she argues has been essential to underscore the rapid changes needed to address these threats.

“Numbers and data are helpful but it’s only a proxy for what it’s really about – quality of life – and there’s an overlap here with those who have the least responsibility,” she says.

“That has led me to understand that while we need to do the legal text, the numbers and scientific rigour, this is fundamentally about men, women and children.”

Analysis: With women at the top, UN climate body has chance for real change

The role of women in the UN climate process has changed – visibly at least – beyond recognition during her tenure.

Six of the top positions in the UN climate process are held by women, while the Paris agreement made five references to gender.

It’s perhaps a minor detail, but one that at least emphasises the understanding most governments now have on the links between empowerment and effective climate policies.

“We’ve had an improvement… but I’m not sure we have got to finish line,” says Figueres, who maintains women’s openness to multitasking and complexity is an asset to the UN climate talks.

Yet away from the gilded halls of power, lack of opportunity for women remains commonplace, an injustice she plans to fight.

“It continues to be a huge concern that in the wider world women do not have access to education that boys do – all the way from youth to adulthood,” she says.

“Women are not being paid the same and are victims of violence. Women do not have equal access to education. The social performance indicators are intensely and painfully lopsided.

“For thousands of years society has been hopping forward, not making full use of the female leg. We need to walk with both legs.”

Where the UN meets Abba. Delegates are now all singing 'Climate Queen' to @CFigueres in the main plenary,,, pic.twitter.com/k4Zc7LC871

Still, for all the praise lavished on Figueres this year – she was serenaded by climate activists to the tune of Abba at her final UN meeting, picked up the Legion of Honour from France and awards from Time Magazine and Forbes – the Costa Rican has her critics.

A vociferous defender of climate science, she has long railed against the US Republican party’s dabbling with climate scepticism and denial.

“One day they will get the physics,” she told Climate Home back in 2011, a theme that she has frequently revisited, to the chagrin of many GOP lawmakers.

Equally, her praise of China’s rapid investments in green technologies and critique of the damaging aspects of unregulated markets have drawn sharp criticism from right wing media commentators.

“I do know I have been called a communist,” she says, laughing down the phone line from Bonn.

“I think maybe there are a couple of reasons… part of my commitment to the public good is through common goals that can only be best reached by working together – if that’s called communism so be it.”

Figueres also outraged many greens by agreeing to speak at a World Coal event on the sidelines of the 2013 UN climate summit, taking an uncompromising message of change to top coal executives.

And in May 2015 she courted controversy with a call for climate activists to stop demonising the much reviled oil and gas sector, arguing they are “part of the solution”.

She is unrepentant, and some fossil fuel giants seem to be getting the message, for example Total targeting a rapid expansion of its solar wing.

Others like ExxonMobil and Chevron dismiss the Paris deal and its aspiration for net-zero emissions in the second half of the century.

If that’s a direct threat to the viability of the UN’s new climate pact, its chief architect sounds unmoved – if anything dismissive of what she ventures is a dying business model.

“The moment has come to change. I can’t imagine if you’re in the oil and gas sector in any level of leadership or management you won’t have read the Paris Agreement because it is the policy context in which you operate at a global level,” she says.

“I’m sure they have read it. Question is, what do they want to be?”

Still, she argues, there’s evidence capitalism and business is also inching in a greener direction, one that targets three bottom lines: profit, people and planet.

“I am very excited by a new vision germinating,” she says. “They are now coming forward and saying they understand.”

Part of that confidence comes from the 2,000 businesses that lodged carbon cutting pledges with the UN last year. Influential leaders like Mark Carney have also made an impact.

The Bank of England governor’s seismic warning of the financial consequences of climate change was a “factor” in the success of Paris, she says, adding the Canadian was “clearly and eloquently a voice of risk”.

The thing is, all this wasn’t really supposed to happen. Asked in her first press conference back in 2010 if a global deal was possible, Figueres was painfully blunt. “Not in my lifetime,” she said.

When she took over the UN climate talks, UN staff were still suffering from the trauma of the 2009 Copenhagen summit.

That was the meeting everyone thought would deliver a global pact, and ended in acrimony as major developed and developing countries faced off over who would make the needed carbon cuts.

“Morale was so low. My priority was internal. On the first day I told all the staff at a meeting I considered myself highly privileged, but I realised people were not in a good space and need a smile on their face,” she says.

“I walked in with a whole bunch of file cards and asked everyone for three suggestions.”

In the days after her request, more than 400 suggestions came back, plastering the floor and walls of her office in the coming months.

What she now refers to as “project smile” was born. Optimism in the face of all the odds became order of the day, a stance that often appeared odd given the precarious state of the talks.

That attitude shows little of dimming. As she prepares to hand implementing the Paris deal to former Mexico environment minister Patricia Espinosa, Figueres rejects claims a US presidency under Donald Trump would kill her work.

“He needs to look more into facts… to renege all other 194 countries will have to agree – I just don’t think that’s possible,” she says.

Figueres refuses to accept that a new, aspirational goal to limit warming to 1.5C above pre industrial levels is impossible, even as scientists say it may be broken within a decade.

“Call me an incurable optimist which I’m happy if you do – I do think we will avoid 1.5C,” she says. “Technology is moving incredibly fast – faster than we could possibly have imagined, that coupling of technology, policy… we will avoid 1.5C.”

This year Forbes rated her the world’s seventh greatest living female leader, Time Magazine listed her as one of its top 100 “pioneers” for 2016.

Asked by the BBC last week if she had plans to run for UN secretary general she demurred. “We’ll see,” she said.

She won’t be following her father and brother in pitching for the Costa Rican presidency, she tells Climate Home, but is considering offers to “serve my government”.

Born in Latin America, educated in the US and UK, moulded by her time in Germany, the next move is likely to be global.

The strength of the Paris deal and of the climate movement is its strength in diversity, she contends, evidenced by the hundreds of thousands – including her her two daughters and niece – who marched the streets of New York in September 2014.

Traditional greens were joined by lawmakers, business leaders, bankers and lawyers on a day she says bolstered her belief in the power of people.

“I have a fundamental faith in the transformational nature of mankind so long as we understand we each have unique interests – like natural resources,” she says.