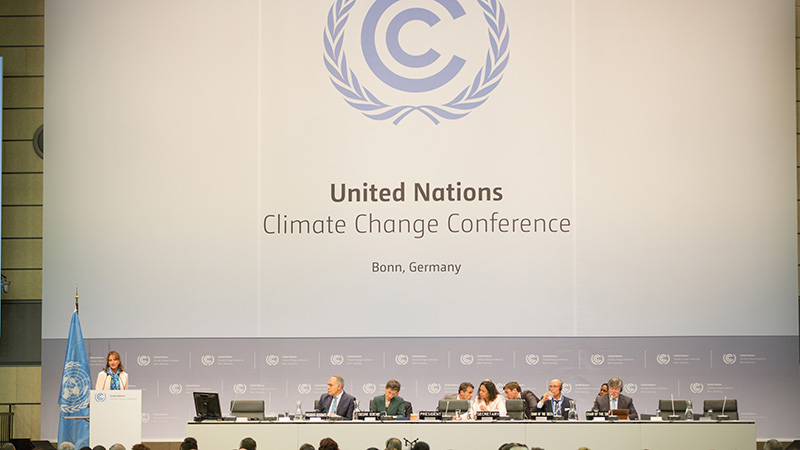 Donald Trump’s incendiary comments over the UN’s new climate deal made little impact in Bonn on Wednesday, where officials from 196 countries are working on plans to slow global warming.

Late on Tuesday, the likely Republican candidate for the White House said he would seek to renegotiate the Paris Agreement “at a minimum”.

The statement caused a media frenzy in the US, deep in 2016 election fever. But in the former West German capital, envoys Climate Home contacted said it was business as usual at negotiations on implementing the deal.

“I don’t think it’s that worrying,” said one EU official. “I haven’t heard a thing,” said another envoy from a small island state. The UN declined to comment.

One man happy to talk about Trump’s latest bombast at the UN climate negotiations found few takers among the thousands of delegates.

“It hasn’t registered with people I have talked to, although some people are laughing about it,” said Alden Meyer from the US Union of Concerned Scientists

Trump would find himself alone against more than 190 countries he said, trying to renegotiate a deal that was specifically designed to allay US concerns it would face binding emission cuts.

“Does he not like the fact it’s a voluntary, bottom-up deal?” Meyer questioned.

The comments emerged in an exclusive interview with Reuters, where climate sceptic Trump voiced familiar concerns over China not making carbon cuts and the US accepting an unfair deal.

The billionaire was apparently unaware US secretary of state John Kerry had wording changed in the final text to give the US wiggle room and ensure the pact was not legally binding.

Other highlights from the interview included a promise to open talks with North Korea dictator Kim Jong Un, and retraction of previous praise for Russian president Vladmir Putin.

Trump would meet Kim Jong Un but tear up an historic climate agreement forged with our global allies? No thanks. https://t.co/Eb4ymxy7Li

The controversial comments were the latest in a colourful and frequently bitter campaign, in which Trump has suggested building a wall on the Mexican border and banning Muslims from the US.

In a bizarre twist on Tuesday, Melania Trump was prompted to assure readers of DuJour magazine her husband was “not Hitler” and simply wants to “help America”.

Amid the twitterstorms, jesting and lively media coverage there are gnawing fears about the level of damage a Trump presidency would inflict on the global climate process.

This week, leading US climate data agencies NASA and NOAA warned that warming is hitting record levels due to the burning of oil, gas and coal, urging speed in making global CO2 cuts.

In a statement sent to Climate Home, Marshall Islands climate envoy Tony de Brum said US backtracking on last December’s pact would be a “disservice to all of humanity”.

“We need the US to continue to be a constructive partner working to ensure a safe climate future for all,” said the veteran diplomat, who played a central role in delivering the Paris deal.

Still, a Trump presidency would only be able to inflict limited damage on global efforts to slow emissions, argues Nick Mabey, head of the London-based E3G think tank.

“The US is not the central power anymore. It’s not like Bush 2 when the US was the world’s biggest emitter,” he says.

“There’s a realistic limit on what damage he could do, and of all the geopolitical issues I’m worried about, the [continued] roll-out of clean energy is one I’m least worried about.”

It’s a sentiment echoed by Meyer. “The concern is not that it [the US] would walk away like George W Bush in Kyoto [2001], it’s just it wouldn’t do anything to implement it.”

China, which formed a remarkably tight alliance with the US through 2014 and 2015 on low carbon and climate issues, is watching developments closely.

If the US fails to meet its commitment to cut emissions 26-28% on 2005 levels by 2025, Beijing may be forced to slacken its targets, a senior official told the New York Times recently.

A Trump presidency and the death of the clean power plan would lead to calls for China to do the same, said Zou Ji, the deputy director general of the National Centre for Climate Change Strategy.

At home – and perhaps abroad – people would ask one question, he mooted: “Look, the United States doesn’t keep its word. Why make so many demands on us?”