China and US set for airline emissions clash

The aviation industry has agreed to offset emissions growth from 2020 (Pic: Flickr/Mercedes Dayanara)

China and the US are set for a fight over the split of responsibilities for cutting airline emissions at a UN meet this week.

The outcome is critical to the environmental integrity of the sector’s main contribution to international climate efforts: a carbon offsetting scheme.

In a submission ahead of the Montreal summit Wednesday to Friday, China called for rich countries to take on steeper cuts.

“China notes with concern the reluctance of some of the developed countries to take the lead to reduce their international aviation emissions dramatically to leave room for the growth of developing countries,” it said.

The US, on the other hand, stressed the market-based measure should “achieve the widest possible coverage”.

It is a re-run of arguments in climate talks that were laid to rest with the adoption of the Paris Agreement, under which national governments determined their own commitments. 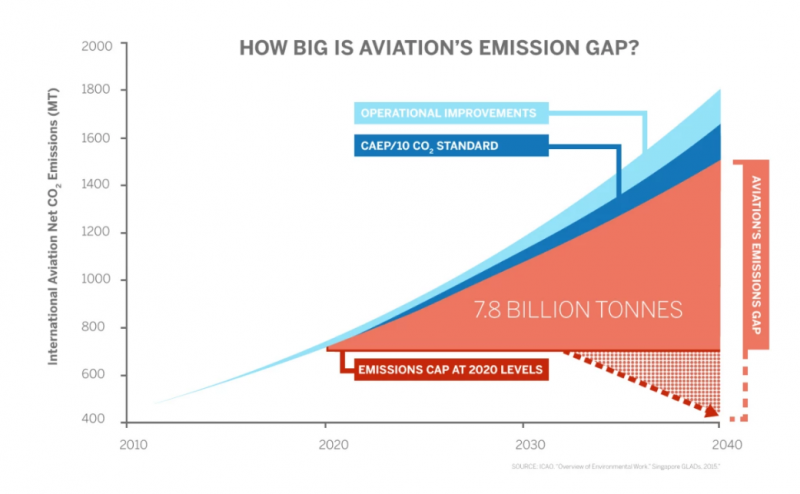 The aviation industry, responsible for around 2% of global emissions and rising, has committed to carbon neutral growth from 2020.

Efficiency improvements and biofuels are expected to trim planes’ carbon footprints, but not enough to balance surging demand.

Airlines will make up the difference by funding carbon-cutting projects in other sectors, in a mechanism to be finalised at a September summit.

Flightpath 1.5, a coalition of NGOs, estimates the emissions gap at 7.8 billion tonnes of CO2 between 2020 and 2040. If, as they urge, the sector sets more ambitious emissions curbs in line with the Paris pact, the gulf widens.

Yet 40% of emissions will not be covered in the first five years, due to carve-outs for poor and small markets, according to WWF’s Brad Schallert.

“With that level of exemptions in the text, the aviation industry is really undermining its own target and any credibility.”

In a media call on Tuesday, Michael Gill of the industry’s Air Transport Action Group agreed a broader base would be better.

“From an industry perspective, our preference would be to have everybody in the scheme from day one, in order to maximise the coverage of emissions across the world,” he said.

“The phase-in mechanism you have mentioned is a political element.”

The loopholes are based on a complex formula that ranks countries by wealth and air traffic volumes – the latter counted by where an airline has its headquarters, not where it operates.

That throws up some surprising results, said Annie Petsonk of Environmental Defense Fund in a phone briefing on Monday.

Brazil is exempt, despite being South America’s biggest economy, as the continent’s largest airline LATAM is based in Chile. Wealthy Switzerland, whose national carrier Swissair collapsed and was bought out by German Lufthansa, is classed as a small market.

Among the countries that are deemed big and rich enough to take part in the offsetting market, including China, the question is how to divide the obligations.

US carriers growing at 1-2% a year want the carbon neutral growth to apply at airline level, falling more on Asian rivals expanding 10-15% annually. Beijing is arguing for established markets to take more responsibility.