International Maritime Organization talks on a carbon target ended in watery compromise on Thursday, after a standoff between Europe and emerging economies 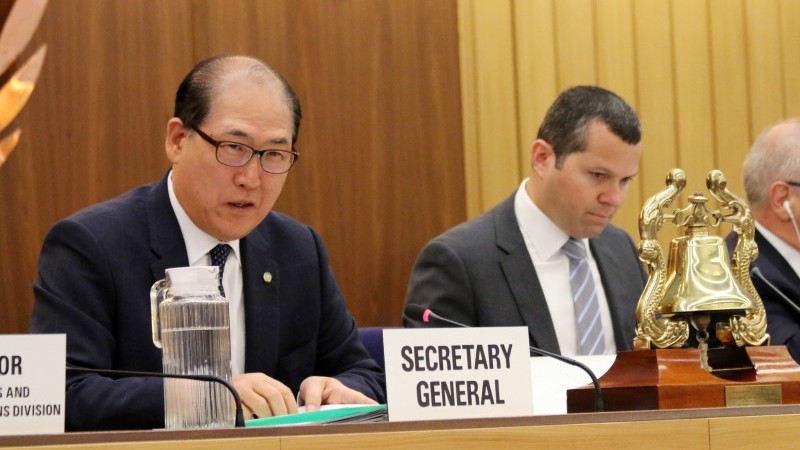 The US sided with emerging economies on Thursday against proposals to set a greenhouse gas emissions target for shipping.

In contrast to President Barack Obama’s urgent rhetoric on climate action, the US envoy favoured an incremental approach at the International Maritime Organization (IMO) in London.

There should be no discussion of an emissions goal until data from individual ships has been gathered and analysed, argued Jeffrey Lantz. China’s delegation agreed it would be “premature”.

That stance was at odds with European countries and some island states calling for shipping to do its “fair share” of global efforts to hold warming below 2C, as agreed in Paris.

Even the usually conservative International Chamber of Shipping agreed that work on a long-term goal complemented rather than conflicted with data collection.

In an unusual intervention, IMO chief Kitack Lim told delegates: “I don’t think it is appropriate to kill our thinking about how we address the long term issues until we finalise the 3-step procedure.”

As a compromise, delegates at the International Maritime Organization in London agreed to a working group for “an in-depth discussion on how to further progress this item” in October.

Tristan Smith, shipping emissions researcher at UCL and regular observer at the IMO, was upbeat about the decision.

“Given the circumstances, that was a very positive outcome,” he told Climate Home. “To see an alignment between industry, Europe and vulnerable states was a great breakthrough.”

While he said there were “challenging issues” to work out, Smith dismissed the argument more data was needed. His analysis for the IMO showed shipping’s carbon footprint, which is the size of Germany’s, is forecast to grow 50-250% without further action.

International transport was not explicitly covered by the Paris climate deal, leaving it open to the IMO to interpret its role.

Campaigners were not impressed. John Maggs of Seas At Risk said: “The IMO has fallen flat on its face in the first test of its determination to tackle greenhouse gas emissions after Paris, unable even to agree to develop a work plan for reducing ship emissions.”

Thursday’s debate on the process offered a foretaste of substantive battles to come.

Brazil called for the working group to follow the principle of UN climate talks: that countries have a “common but differentiated responsibility” to act. That clashes with the IMO’s non-discrimination approach.