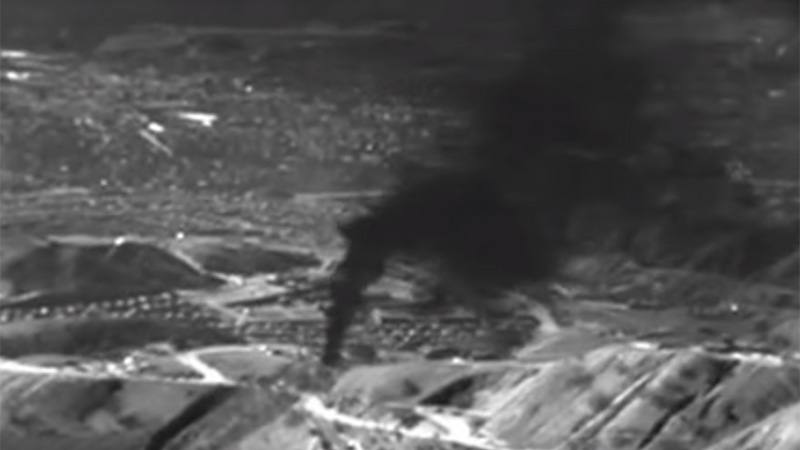 A still from infra-red footage shot by an Earthworks ITC-certified thermographer over the leak (Pic: EDF/You Tube)

A new study confirms the unprecedented Californian gas leak as the biggest ever, leading to a 20% spike in the state’s methane emissions.

An estimated 60 metric tonnes of gas spewed from the well near San Fernando Valley every hour, mounting to over 100,000 tonnes of methane and ethane during the 112-day blowout, according to a scientific study in the journal Science.

The figures exceed previous estimations and will leave an impact on the climate for the next 100 years, equal to the annual greenhouse gas emissions from 572,000 US cars, said the report.

At its worst, the ruptured well – finally plugged earlier this month – was California’s largest point source of methane.

The amount of gas being released was double that of a coal mine in Alabama and equal to one-quarter of the annual methane pollution from all other sources in the Los Angeles Basin combined, the report added.

Gas company SoCal detected the ruptured well on 23 October 2015, which continued to spew gas until it was plugged on 11 February.

The concentration of gases in the air was so high that experts could barely believe their readings. “This was just a huge event”, said lead scientist Stephen Conley.

Statewide methane emissions during the event increased by around 20%, according to the California Air Resources Board, undermining efforts to reduce greenhouse gas levels.

-Methane is 84 times more polluting than carbon dioxide in the initial decades after it is released.
-Over a 100-year period, the effect of methane on warming the planet is 25 times that of Co2.

The report noted that rapid evaluation of episodes like the Aliso leak is essential to meet the requirements of the Paris climate agreement, which requires countries to be fully transparent in accounting for their emissions.

Sulphur-containing compounds such as mercaptan found in samples of the leaked gas can cause short-term loss of smell, nausea, headaches and other irritations.

SoCal are currently determining the cause of the leak and authorities aim to develop a climate mitigation program in response to the leak by March 31 this year.

University of California, Irvine (UCI) and the National Oceanic & Atmospheric Administration (NOAA) were among the institutions involved in the study.