At an Oslo meeting this week, communications experts challenged the IPCC to make its reports easier to understand, but will it listen? 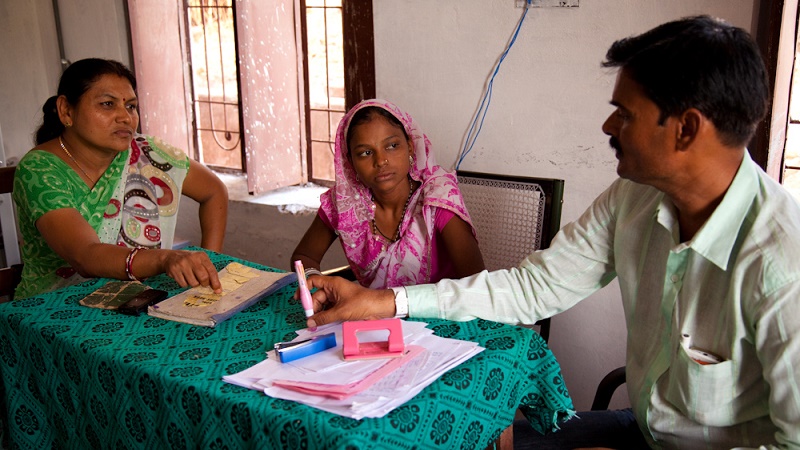 Who are IPCC reports aimed at? They should be comprehensible to village leaders, says one Indian expert (Flickr/UN Women/Gaganjit Singh)

By Richard Black in Oslo

Jim Skea summed it up by reading out one sentence:

“Estimated global GHG emissions levels in 2020 based on the Cancún Pledges are not consistent with cost effective long-term mitigation trajectories that are at least as likely as not to limit temperature change to 2C relative to pre-industrial levels (2100 concentrations of about 450 and about 500 ppm CO2eq), but they do not preclude the option to meet that goal (high confidence).”

Are you lost yet?

If you are, you’re almost certainly not alone; which is the point.

That sentence, taken from its fifth assessment report (AR5), is an admittedly extreme example of the torture that the Intergovernmental Panel on Climate Change (IPCC) has visited upon the English language down the years, and one of which Professor Skea, who played a leading role in AR5, is not proud.

One recent study concluded that the summaries for policymakers – the bits that are supposed to be the most readable – are more complex than scientific papers by Albert Einstein or Stephen Hawking. Yes, there are scientists such as Angela Merkel among the world’s body politic, but even so it’s hard to see how such a product can really claim to being written ‘for policymakers’.

To be fair, the IPCC has improved its communication and outreach programmes with each of its assessment reports. And now, with the fifth (AR5) out of the way, thoughts are turning to the sixth (AR6), which is likely to emerge shortly after 2020.

And so the IPCC invited about 70 people with different forms of expertise in communication to Oslo for a couple of days of discussions and debate this week.

Top of the agenda: how to make its output more relevant and comprehensible to its main target audience, whether it should prioritise other sectors of society as destinations for its reports, and how to engage more effectively with journalists in every corner of the globe.

It takes a village

One subject of discussion was who, exactly, is a ‘policymaker’?

Dr Joyashree Roy from Jadavpur University gave an expansive answer: “Policymakers are anyone who take a decision on how we do things,” she said, including village leaders in her native India.

If she’s right, this leaves the IPCC with a rare old communications challenge, because somehow it has to compile and communicate its summaries in such a way that they’re relevant to everyone from a technocrat with a PhD in Physics to a possibly illiterate village leader.

Even within a single government the term ‘policymaker’ is far from unitary. It can be taken to embrace both elected politicians and bureaucrats; and people from departments such as energy, agriculture and finance ministries all want information on different aspects of the report.

The same conclusions hold true for outreach and communications. For example, while Twitter, infographics and interactivity are increasingly the channels of choice for switched-on European climaterati, in other parts of the world, radio is still king.

Susan Joy Hassol is an American climate communicator who played a major role in making the recent US national climate assessment both readable and engaging; and based on that experience, part of her advice for the IPCC is to think in layers.

Its assessments already have three layers – the underlying technical chapters of each working group, its technical summary and its shorter summary for policymakers (SPM) – and it’s all tied off at the end with a synthesis report. But why not go further?

Could the main chapters be layered, for example, with sections of prose linking down to the underlying data? Could the SPM itself be re-structured to as to begin with a few pages of essentials, followed by – or linking down to – the detail that a moderately wonkish policymaker might require?

A couple of years back I was involved with a project that distilled the thousands of pages of AR5 into 11 short reports for various sectors of society, such as energy, transport and fisheries. Finding all the relevant bits for each sector was, frankly, a nightmare; but this is exactly what some government departments might want to do, as well as other users.

So, now that we’re in what Chris Field (co-chair of AR5 working group 2) describes as the ‘post-Gutenberg world’, could the entirety of AR6 be cross-linked and cross-referenced, enabling anyone to seek out all the bits relevant to their special area?

Above all, how can lead authors ensure that their scientists actually use the advice given up front by communication experts so as to make the final product as readable as it can be?

Could questions be sought in advance from intended audiences (especially policymakers of all types) to ensure that the reports address their needs, rather than being shaped by academics for academics? They are, after all, supposed to be ‘policy relevant’.

Leaving Oslo, it’s not clear which of the many recommendations we gave to the IPCC Secretariat will be implemented in the AR6 process.

Some governments are inherently conservative and frankly, one senses, would like the IPCC to remain in the 1980s – speaking only to governments, and only in the form of long sentences of Times New Roman inked on dead trees.

But there was one optimistic sign. Shortly before the meeting started, the distinguished US commentator Andy Revkin asked publically whether a meeting on communications should not be – erm – communicated openly.

As a result, all of the whole-group sessions were live-streamed, with a heap of Twitter activity following (putting the hashtag #IPCCOslo among the top 10 trenders in Germany).

That was responsive, open and fast – everything that in the past, the IPCC hasn’t been.

For all its travails, the IPCC is uniquely positioned as collator, digester and arbiter on the big questions of climate change and the clean energy transition that is needed to restrain climate change. The conclusions of its expert working groups are accepted by governments, enabling citizens (and journalists) to hold them to account if they don’t act in accordance with its findings.

So, let the English language be un-tortured, and let every scientist involved in the next IPCC assessment begin by recalling Einstein’s famous dictum that “if you can’t explain it to a six-year-old, you don’t understand it yourself”.

Richard Black is director of the Energy and Climate Intelligence Unit