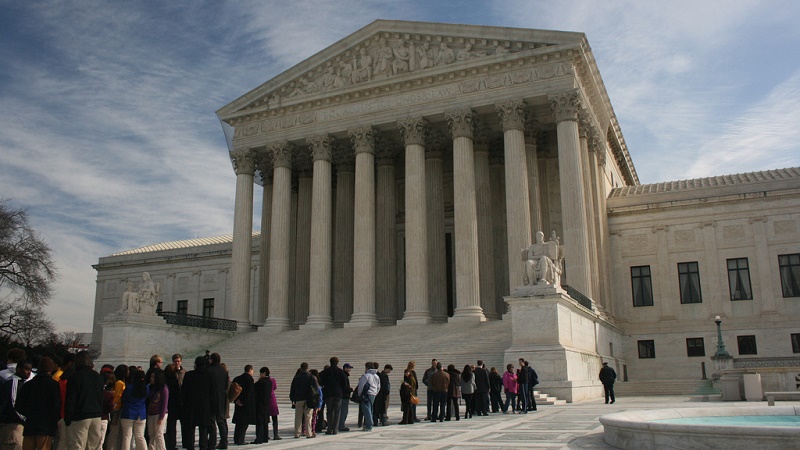 The US Supreme Court (Flickr/Supermac1961)

Little over two months ago, as the 2015 Paris climate summit edged to a conclusion, the US joined the grandly named “coalition of high ambition”.

The 100-or-so members agreed to include an aspirational target of limiting global warming to 1.5C above pre-industrial levels in the deal, requiring radical greenhouse gas cuts.

So long seen as blockers at UN climate talks, the US gained green credits when President Barack Obama launched his Clean Power Plan to slash energy emissions 32% on 2005 levels by 2030.

But Obama’s flagship strategy to tackle climate change is now under threat after Supreme Court judges voted 5-4 to place the plan on ice until 2 June, when its “legal merits” will be debated.

The decision emerged on partisan lines, with right-wing justices opting to stall the plan while left-wingers defended it.

While it will hearten the 27 mainly Republican states and energy companies claiming the plan was a step too far, it deals a major blow to climate activists.

International reaction was swift. Venezuela’s chief climate envoy Claudia Salerno said the move was “truly damaging” to the COP21 Paris deal, which was agreed by 195 governments.

Was it all too good to be true, she mused, adding the judges were “destroying the world perspective on tackling climate change”.

Yeb Sano, head of Greenpeace South East Asia and a former head negotiator for the Philippines told Climate Home the news was “not surprising” but a signal of work to be done.

“It is one thing to have an agreement in Paris and another thing for governments to actually follow through on the pledges they have made,” he said.

European climate chief Miguel Arias Canete said he would meet lead US climate envoy Todd Stern in Brussels next week to “better understand the potential implications of the Supreme Court’s decision,” he said.

“We have confidence in all countries to deliver on what they promised. The EU will continue to lead by example and enshrine its targets into law.”

The EU itself shows little sign of tightening its climate targets, as it faces an internal struggle simply to ratify the Paris deal.

The judgement’s timing was immaculate, coming hours before the UN launched a social media drive to encourage countries to sign the Paris deal in New York on 22 April.

“For me agreement means a resilient, low emission and sustainable future full of opportunity for my two daughters and every young person,” said UN climate chief Christiana Figueres in a video clip.

The deal requires 55 countries covering 55% of global emissions to sign up before it becomes active and the US is widely tipped to be one of the first to rubber-stamp its support.

But with the core climate architecture to back up its ambition on ice, that support could look shaky, as California governor Jerry Brown alluded to in a fierce statement late on Tuesday.

“This arbitrary roadblock does incalculable damage and undermines America’s climate leadership,” he said, branding the 5 judges who voted against the plan “tone deaf”.

Critics within Congress were quick to leap on the decision, claiming evidence of presidential overreach.

“Today’s Supreme Court order to halt those regulations – regulations that attack the middle class and won’t even have a meaningful impact on global carbon emissions – is just the latest sign they may not be [legal],” said US senate majority leader Mitch McConnell, a Republican from Kentucky.

“The stay is a victory for the rule of law, and is sure to put climate change science and policy under the microscope of the 2016 election,” added Patrick Michaels from the right-wing Cato think tank.

Still, while the ruling is a win on paper for climate sceptic Republicans and the coal industry, its impacts are unlikely to have many immediate impacts, domestic or global.

US coal giant Peabody energy called the decision a “victory for American families” but the use and production of the world’s most carbo intensive fuel is crashing stateside.

“This might buoy sentiment for coal, but I don’t think there are any practical market implications,” Cheryl Wilson, an energy policy analyst for Bloomberg Intelligence told Bloomberg. “I don’t think you would see a utility change their decisions based on this ruling.”

Abyd Karmali, head of climate finance at Bank of America Merrill Lynch, tweeted the decision was a “legal blow” but would not shift the trend of utilities moving from coal to gas and renewables.

And as the Washington DC–based ClimateWire website revealed recently ($), despite intense hostility to Obama’s climate strategy Arizona, North Dakota and North Carolina are already in advanced stages of working out how they will comply.

Obama’s press chief Josh Earnest was keen to emphasise the administration’s business-as-usual take on the ruling. “We remain confident we will prevail on the merits,” he said.

“Even while litigation proceeds EPA [Environmental Protection Agency] has indicated it will work with states that continue to plan development.”

Internationally, the Supreme Court judgement will take time for countries to digest.

The US-China decision to make joint pledges well ahead of Paris was credited as a major reason for the summit’s success, and its long term credibility.

It’s likely Todd Stern will face an avalanche of questions at an informal negotiator gathering in Japan this month.

Longer term, the outlook is unclear. Even if the CPP survives in June, its fate will largely depend on who is elected president in November. No Republican has indicated they want it to survive.

But Liz Gallagher, head of climate diplomacy at London-based think tank E3G argues what was agreed in Paris was resilient enough to cope with what she terms “bumps in the road”.

“The decision will be interpreted by those already looking to sabotage Paris that we cannot deliver the Agreement.  But the beauty of the Paris Agreement was its universality.

“This is not just a US-China government-to-government story now, it’s a global one where corporates, investors and cities and citizens all play a crucial role.”