Oil major revises up forecast for solar, wind and hydro power by its biggest margin yet in 2016 annual energy outlook

It is hard for any company to envisage a future in which it becomes irrelevant.

So it should be no surprise that oil majors forecast the continued dominance of fossil fuels in the energy mix – with coal playing a declining role.

What is revealing is how their projections change year-on-year, in the face of a reality that climate policies and clean technology are eating into their market share.

BP has revised upwards its predictions for renewable energy every year since it started publishing an energy outlook in 2011.

Perhaps more surprisingly, it downgraded by 2.8% the prospects for gas, long touted as a winner in the transition to a cleaner energy mix. Expected energy efficiency improvements outweighed the gains of switching from coal to gas. 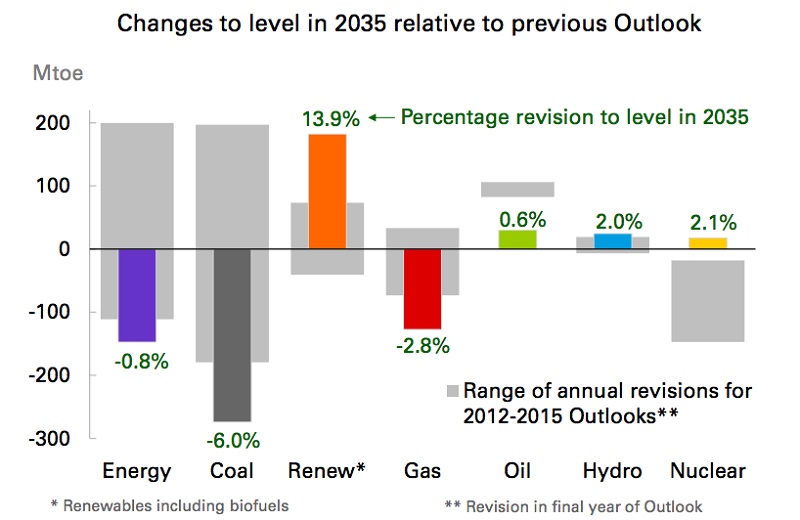 The bad news is this amended “base case” still sees greenhouse gas emissions rise 25% over the next 20 years, busting through the global warming danger threshold.

Even a new faster low carbon transition scenario only gets half way to what is needed to hold temperature rise to 2C, let alone the 1.5C aspirational goal in December’s Paris climate agreement.

Some of the assumptions made in this semi-green case look pretty heroic: A carbon price rising to US$100 a tonne by 2035 in rich countries and $50/t elsewhere. In the EU’s carbon market, prices are languishing at €5 (US$6).

(Despite – or perhaps because of – limited evidence it works in practice, an emissions trading system is the oil sector’s preferred climate policy tool.)

But on economic restructuring and clean energy development, BP remains conservative. Electric vehicles will achieve “limited penetration” and there will be no technology breakthroughs.

“Dressed in a veneer of concern about climate change, in fact BP’s outlook is a public relations exercise, designed to boost fossil fuels and undermine public faith in clean alternatives. Meanwhile it deflects responsibility to government or to coal companies, to distract from its own extraction of oil and gas.”

“Collectively achieving a 2 degree pathway requires rigorous analysis of key uncertainties, and we welcome their inclusion in BP’s Energy Outlook, alongside the company’s ongoing call for meaningful carbon pricing,” she said.

CCLA is part of the “Aiming for A” shareholder coalition that last year got BP to agree to disclose how its assets could be affected by climate action.

Scientists estimate at least half of proven natural gas reserves worldwide and a third of oil cannot be burned if warming is to be held to 2C.

For the outlook, BP chief economist Spencer Dale said, analysts looked at what they considered likely, not desirable.

“Relative to history, that is still quite an exceptional change,” he said. “It underlined to me how unbelievably challenging the 450 scenario [consistent with a 2C warming limit] is.”