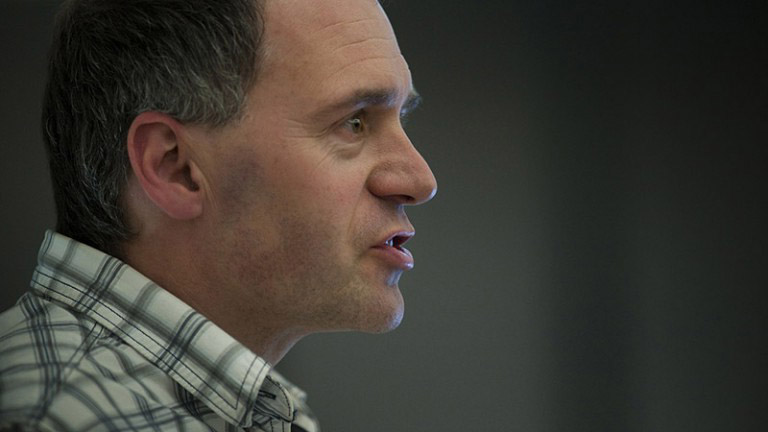 “Everything should be as simple as possible but no simpler.”

Einstein’s memorable quote is one Richard Betts likes to drop in when discussing climate science communication.

Head of climate impacts at the UK Met Office, Exeter-based Betts is one of the country’s leading experts on global warming.

A lead author on the last two Intergovernmental Panel on Climate Change reports and an avid tweeter, he has clear views on how the subject should be discussed.

“There’s a point where you can simplify it too much and if you cross that line then it will come back to bite you in the end.” 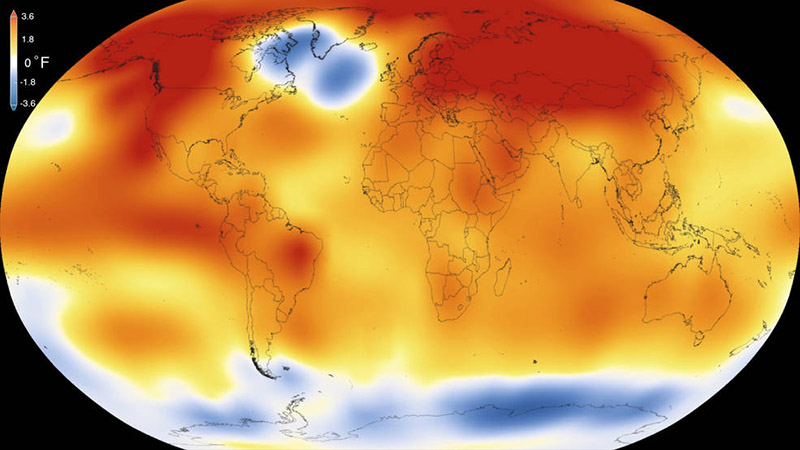 That’s a challenge when many climate science debates are squeezed into 140 characters on twitter.

And it’s a challenge at a time when the public (and journalists) appear increasingly intolerant of equivocation. Yes or no are fine. Maybe is not.

“There are certain basic things we can be certain about: CO2 is a greenhouse gas, CO2 levels are rising and we are responsible for it, that’s indisputable,” says Betts.

“There are certain things we are less certain about like the exact level of climate sensitivity,” he says, which refers to the speed temperatures respond to increases in CO2 levels.

Estimates vary. Climate sceptics tend to adopt the most optimistic case to argue against tough carbon-cutting policies, while campaigners take pessimistic scenarios to heighten a sense of urgency.

Bett’s point is neatly illustrated in the IPCC’s synthesis of its most recent report, published in 2014.

But as the document progresses it moves from past, to present and future. There, logically, predictions have to be a little nuanced.

Some within the climate science and campaigning community see uncertainty as an enemy, a Trojan horse that can be used by sceptics or deniers to undermine their cause.

Not Betts. He cites the so-called global warming ‘pause’ of surface temperatures that roughly ran from 1998-2013 as an example of the need to embrace uncertainty.

Had the IPCC and Met Office stressed the variability of global temperature rises linked to greenhouse gases, the furore over stalled warming might never have happened.

“It it doesn’t affect the long run at all… but you shouldn’t ignore the fact that this did happen. It was’t specifically predicted but it was in the range of the models in terms of variability.

“In advance we could have been better at saying this was a possibility.”

Comment: Why you should bother to read the IPCC synthesis report

Communicating what could happen by mid-century or 2100 is a little harder, Betts admits, but as director of the €12 million High-End cLimate Impacts and eXtremes (HELIX) project, that’s his job.

Its aim is to work out how Europe, Africa and South Asia would cope with warming of 2C, 4C and 6C, offering policymakers a risk trajectory they can refer to in the future.

The 2C figure is well-known to avid followers of the UN climate talks, having gained mythical status in the past decade.

Still, using this figure comes with its own problems, as Betts argues in depth in a blogpost published this week.

“When the impacts of climate change will become ‘dangerous’ – and indeed whether they already are – is something of a value judgement,” he writes.

“It is quite possible that many of the risks could be reduced by adaptation, at least in the short term, if the right plans and investments are made.

“Improving resilience, especially through poverty reduction in developing countries, will help global society adapt to the imminent changes that are already locked-in.  But it is unlikely that risks can be reduced to zero.” 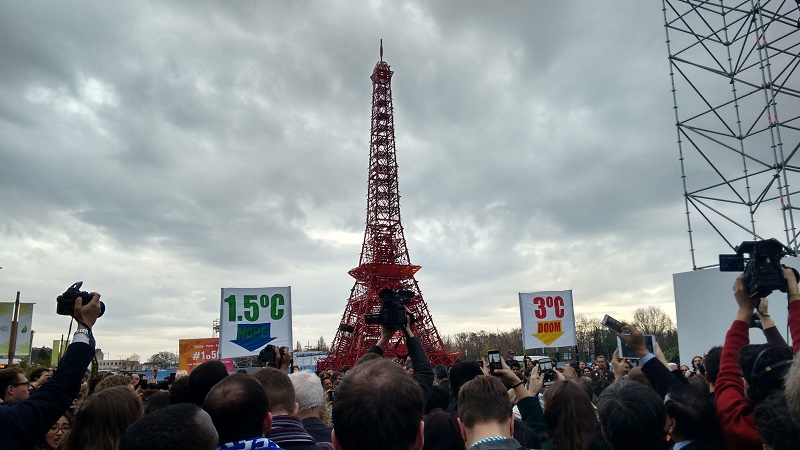 At Paris climate talks, campaigners rallied behind a 1.5C warming limit, but the science behind it is thin (Pic: Megan Darby)

The trouble is, politicians and campaigners love numbers. At the recent Paris climate talks governments agreed to “pursue efforts” to limit warming to 1.5C, a sign some argued of ambition.

It turns out few really know what this number means: at a European Commission meeting in Brussels this week Betts was asked if his team could look into the impacts of 1.5C.

Given the rate of warming and greenhouse gas emissions, the world could pass that mark within a decade or two, he says.

But on the day when the Met Office, NOAA and other top climate forecasters announce we’ve hit 1.5C, “things will not suddenly change”.

Once the newspapers (if they still exist) are fish and chip paper, that may leave some wondering what all the fuss was about.

“A real concern is sea level rise. One of the reasons that figure was chosen was it was the potential threshold of the irreversible melt of the Greenland ice sheet,” he says.

“It may be above and possibly below – but it’s understandable people don’t want to take risk of going there.”

This is not imminent. The world could face half a metre rise by the end of the century, enough to put many small island states out of business, and wipe out some low-lying coastal regions.

Longer term – perhaps over thousands of years – there’s the ominous prospect of a 7 metre rise. 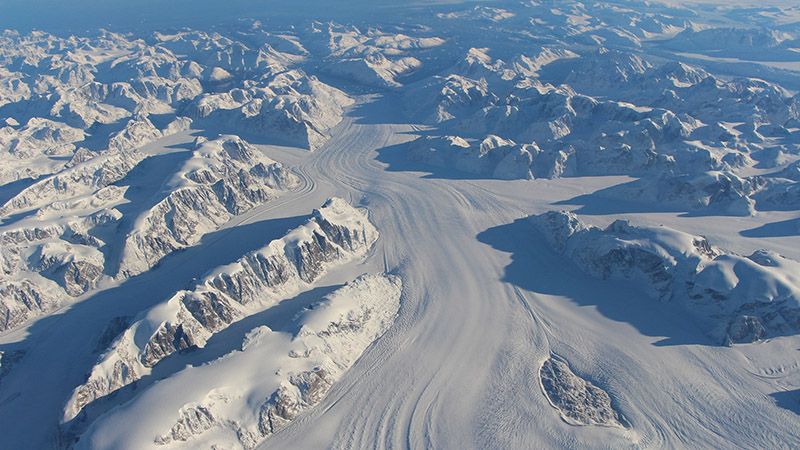 Ethically it’s a problem we all need to consider, he argues. “It may not be within [our] human life but it doesn’t mean it’s not an issue.

“This is where ethics and morals come in – looking at threats in one or two centuries. That’s something you need to think about.”

At times – albeit infrequently – the sheer weight of the havoc a warming world could wreak has come home to him.

Once he was on a train from Grenoble to Paris for the launch of an IPCC report. “I was reading it, and I was going bloody hell… when you see it laid out all of a sudden you start to get a sense of it.”

Another time was at the premier of the Age of Stupid, a drama-documentary based in a dystopian 2055, where London is submerged, Sydney is burning and the Arctic is ice-free.

“It takes some extreme lines but they are defensible scenarios if you dig into it,” Betts says. “When I saw that I was… woah.”

Supercomputers, satellites, ocean buoys and a legion of remote weather stations are now handing climate scientists record amounts of data to play with.

Amateur naturalists are also helping complete the picture, reporting on when spring arrives and when flowers are coming into bloom.

It’s still a “messy” series of patterns, says Betts, but the tools coming online are allowing researchers to edge closer to their Neo in the Matrix moment.

Scientists gave a “sigh of relief” when the Paris deal was signed off, he says. “At least now we can finally agree there’s an issue and we can do something about it… though it’s still a question about how.”

A few will never be totally sold. Betts attracts regular traffic from a devoted band of climate sceptics, who pick up on his every utterance.

@Foxgoose Foxy you're reading *far* too much into tweets. Chill out, chap. @dougmcneall @Balinteractive @shubclimate @ed_hawkins

For the most part he makes sure he responds, for the simple reason he believes this is one of the critical questions facing humanity.

“It happens to be a matter of huge importance, whether you believe it or not. You can find it scary or in my view it’s a privilege. We’re really lucky.

“Even the sceptics on twitter… even when they’re having a go, I think they’re interested in what I’m doing!”