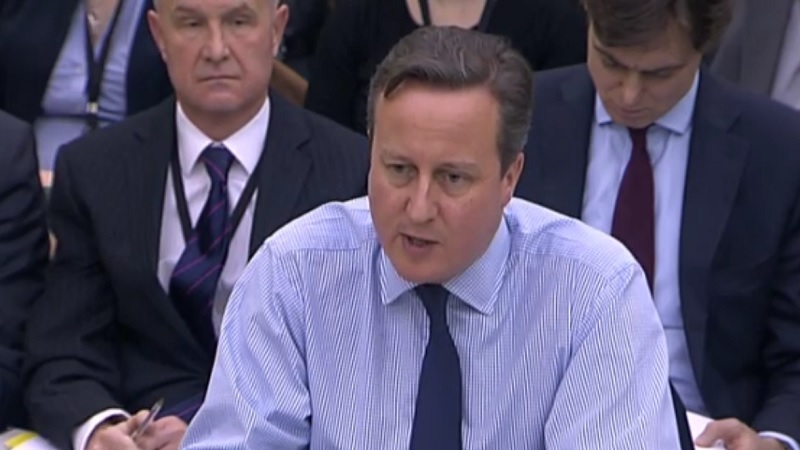 Lawmakers praised the government’s role in securing a UN climate pact in Paris, but charged it with undermining action at home.

It was not only renewables companies upset at cuts to green support in the past year, noted Huw Irranca Davies MP. Business association CBI, consultancy EY and even former US vice president Al Gore have raised concerns.

The PM cited a climate performance ranking by German Watch and Climate Action Network, which placed the UK near the top alongside Denmark and Sweden.

He reeled off achievements in clean energy investment and reductions in greenhouse gas emissions since he came to power in 2010.

But climate watchers were more concerned about the future, after the Treasury took a hatchet to carbon-cutting initiatives last year.

.@David_Cameron taking credit for green policies put in place by last two governments, even as his dismantles them. Classy. #saveoursolar

The actions of past Govs are why the PM can tell the Committee about decarb progress today. #LiaisonCommittee https://t.co/EwtSmQV9Tt

My key takeaway is that, with less than four years to go, Cameron has decided that tackling climate change will not form part of his legacy.

The latest blow, in November, was the scrapping of a £1 billion (US$1.4 bn) competition to develop carbon capture and storage (CCS) on a commercial scale.

“While we completely agree on the idea… the economics at the moment really aren’t working,” said Cameron, who had previously described CCS as “absolutely crucial”.

In Paris, energy minister Amber Rudd had responsibility for forging agreement among ministers on pre-2020 ambition. The UK joined a “high ambition coalition”, making common cause with countries vulnerable to climate impacts.

Back in Britain, she has admitted more policies will be needed to meet the 2020 renewable energy target and legally binding 2023-27 carbon budget.

The government argued cutbacks to renewable subsidies made in mid-2015 were necessary to ease pressure on consumer bills.

But falling fossil fuel prices meant official forecasts for bills in 2020 had been lowered earlier in the year, a Carbon Brief investigation revealed.