Drought is killing millions of trees in California

California’s drought has already imperilled many of its trees, and within 80 years climate change could destroy the evergreen forests of the entire US southwest 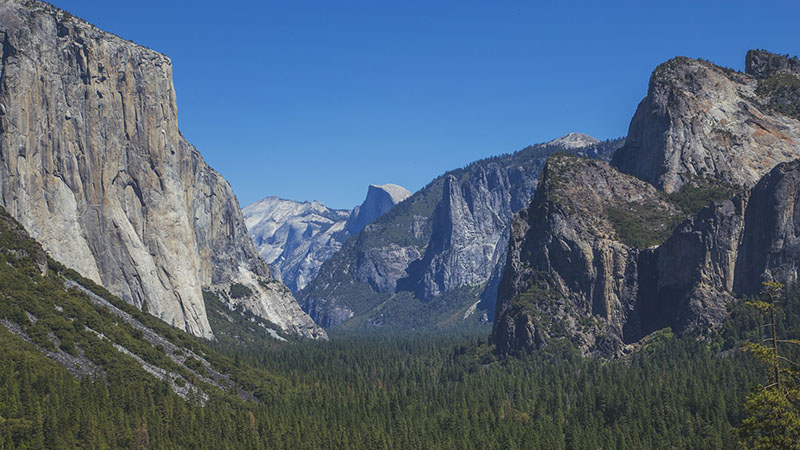 Yosemite national park in California is one of many in the region afflicted by drought – water levels in the Merced River are up to 4 feet lower than usual (Pic: Pixabay)

Tens of millions of trees in California are now at risk because of sustained drought, according to new research.

And a different study in a different journal foresees a parched future for the evergreen forests not just in the Golden State but in the entire US southwest.

Gregory Asner of the Carnegie Institution for Science in Stanford, California and colleagues used airborne, laser-guided imaging instruments to measure, for the first time, the full impact of California’s four-year drought, and combined their measurements with satellite data going back to 2011. What they were looking for, precisely, were the levels of water content in the forest canopy.

They report, in the Proceedings of the National Academy of Sciences, that 58 million Californian trees – pines, firs, hemlocks, juniper, sequoia and so on – are now suffering losses “extremely threatening” to long-term health.

Forests of course are vital components of the planetary survival machine: they provide habitat and nourishment to a host of species, they serve as reservoirs of water, they maintain the stability of mountainsides, they sequester carbon from the atmosphere, they supply industry and – in California especially – the giant redwoods of Mariposa and other forests are tourist attractions.

“So they are tremendously important ecologically, economically and culturally,” said Professor Asner. “The drought put the forests in tremendous peril, a situation that may cause long-term changes in ecosystems that could impact animal habitats and biodiversity.”

In the longer term, too, peril is on the way. US researchers report in Nature Climate Change that they devised models to project the impact of global warming on the forests of the American Southwest – a climatic zone that includes Arizona, and parts of New Mexico, California, Colorado, Utah and Texas – up to the year 2100. The region is home to 11 national forests.

They looked at field results, climate models and a whole range of studies and kept arriving at the same grim conclusion: the outcome was dire. Massive mortality was predicted for the conifers of the region.

“No matter how we investigated the problem, we got the same result. This consensus gives us confidence in this projection of forest mortality,” said Sara Rauscher, of the University of Delaware, one of the authors.

“A treeless Southwest would be a major change not only to the landscape, but to the overall ecosystem”

The study suggests that 72% of the region’s needleleaf, evergreen forests will die by 2050, with nearly 100% mortality of Southwest forests by 2100.

The study does not allow for the forests to adapt. It does consider the worst case scenario, one in which humans go on burning fossil fuels on a business-as-usual principle, releasing ever more carbon dioxide to accelerate increasingly calamitous climate change. The scientists have not considered forest fires and insect plagues that could make their projections even worse.

“This region of the U.S. has beautiful, old forests with historic trees like Ponderosapine that you don’t find in many other places. A treeless Southwest would be a major change not only to the landscape, but to the overall ecosystem,” Dr Rauscher said.

“There is always hope that if we reduce carbon emissions, if we continue to address climate change, then perhaps these dire projections won’t come to pass.”