Experts say 2440 power plants in global pipeline would knock world over 2C warming limit, as row over ‘decarbonisation’ heats up at talks

Decarbonisation. It’s the word few want to utter at a conference aimed at slashing global levels of carbon emissions from burning fossil fuels.

“It is a toxic word, many are opposed to it,” said Bill Hare from the Climate Action Tracker, a think tank charting national climate plans.

The word is “challenging and pretty radical for some countries,” said Liz Gallagher, head of climate diplomacy at the London-based E3G group.

“It will be a very hard sell,” said another veteran observer, speaking on condition of anonymity the sidelines of the talks.

An EU negotiator admitted it would be “difficult” for some countries to accept that word in the final agreement expected on 11 December.

This will disappoint many climate campaigners, who want the Paris climate talks to end with a long term goal committing the world to decarbonisation by 2100.

AS IT HAPPENED: World leaders pledge climate action at COP21

The thinking goes this would encourage countries to accelerate moves to use renewables and lower carbon forms of energy rather than the world’s largest single source of carbon pollution: coal.

“The Paris climate summit needs to send a strong signal to the coal industry – build these plants and you’re burning money, because they’ll soon have to shut down anyway,” said Martin Kaiser from Greenpeace Germany.

“We simply can’t power our world with coal for decades to come. If we do, we’re looking at temperature rises going well into the dangerous zone.”

A study released by Climate Action Tracker in Paris on Tuesday shows why this is such a problem. 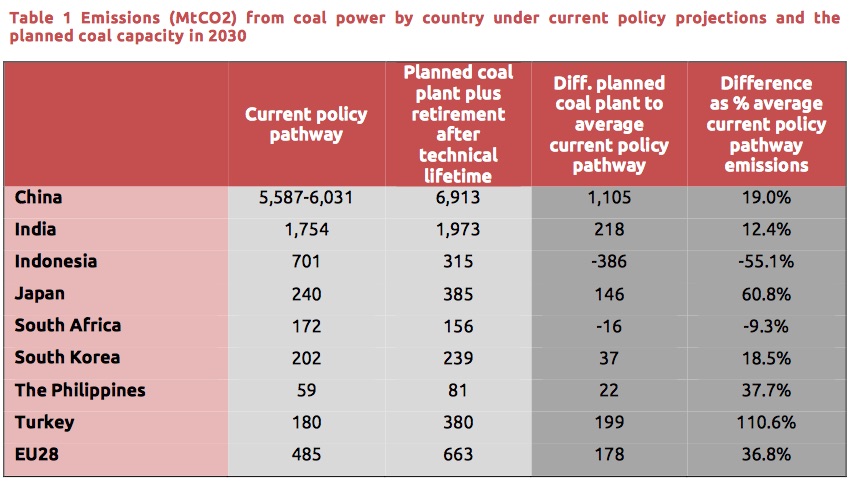 Coal investments in the pipeline could ramp up warming well above 3C, despite climate plans submitted by more than 180 countries ahead of a proposed 2020 deal.

India and China alone plan to build 1617 new coal power plants by 2030, which will blow hopes of keeping global warming to safe levels out of the water, said CAT.

Other countries with ambitious coal plans – albeit at a smaller scale – include Indonesia, Japan, South Korea, Turkey, Germany and Poland.

“Even with no new construction, emissions from coal-fired power generation in 2030 would still be 150% higher than what is consistent with scenarios limiting warming to below 2C,” said the authors.

Not all of these will be built, said the CAT team. Some are in early planning, others may not attract required levels of finance.

But with an average lifetime of 40 years, coal plants built now will be operating well into the second half of the century, when the UN’s IPCC panel says emissions must be falling off a cliff.

Still, India’s coal minister told Climate Home the country had no plans to wean itself off coal – a cheap form of energy the government says it essential to provide the 300 million or so Indians still without grid power a decent standard of living.

“The developed countries also need to understand that India needs a base load for its ambitious power plans and economic growth plans,” said Piyush Goyal.

That may be true, but it leaves the world in a fix, argued Hare. “If the coal minister has his way it will be difficult to [avoid] 2C,” he said.

And it’s a position that puts the likes of India and China on a collision course with the EU and other G7 members, who agreed to target the “decarbonisation of the global economy over the course of this century” in June.

Russian president Vladimir Putin made mention of “carbon nanotube additives” which he said could cut pollution 20%, but not about weaning the world’s second largest oil and gas producer off hydrocarbons.

Brazil, Poland and Turkey are others understood to oppose the ‘d’ word’s use. Goals for net zero emissions, climate neutrality and low carbon transformation are other formulations being considered by countries this week and next.

That opposition may reap dividends. A leaked US briefing note published in Indian media suggested the US could back down on decarbonisation, offering instead an ambition for countries to “collectively aim… to achieve climate neutrality over the course of this century.”

With emissions at record highs and the world set for its hottest year on record, the unwillingness of some countries to back down over a word may sound perverse.

But it could rather be seen as one of many mini battles as the negotiations near their end game.

A strong long term goal is possible, said Gallagher, but would likely come as a result of financial and burden-sharing assurances given to developing countries, who want access to cheaper and greener technologies that could allow them to ditch fossil fuels.