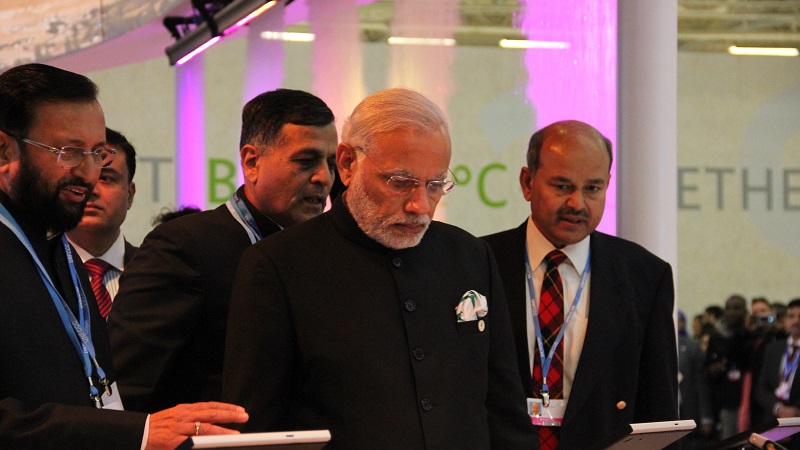 Other countries must accept India will burn coal to bring electricity to millions without, energy minister Piyush Goyal said as UN talks opened in Paris.

At a press briefing, he told journalists solar energy alone would not meet India’s development needs.

“The developed countries also need to understand that India needs a base load for its ambitious power plans and economic growth plans. In any case, if we don’t have a base load we don’t have any renewable energy. It is integral element of India’s development imperative. We don’t have gas so obviously the base load will have to be coal to provide 24/7 power”, said Goyal.

India is looking at rapid economic growth in the next few years, because of which its greenhouse gas emissions will grow. India is already the world’s fourth biggest emitter after China, the US and EU.

Although no country has demanded that India reduce its greenhouse gases, there have been repeated suggestions that, just as the developed countries are required to act, emerging economies like India too curb their emissions. Indian negotiators said they will ensure no such proposal is included in the agreement.

“Countries like India are being expected to increase their emission targets without guarantees they will be helped financially,” said Oxfam’s Tim Gore.

India has been telling the international community that it can complete its climate action plans much faster if international support in the form of finance and technology comes its way.

More than 60 per cent of India’s electricity is generated by burning coal. Developed countries have been urging India to leapfrog to cleaner sources. India has already mapped out an aggressive and ambitious pathway for renewable energy, but because the overall national energy production would also increase, the dependence on coal is expected to continue for another 30 or 40 years.

While India is rapidly expanding its renewable energy capacity, it is also engaged in developing clean coal technology research, encouraging ultra-supercritical power plants. When journalists present asked the minister if India’s obsession towards coal goes against its pledge for walking clean on energy, Goyal said: “We cannot do renewable without coal.”

US Secretary of State John Kerry recently ruffled some feathers in Indian delegation when he said it was regrettable that India was continuing to use its inefficient domestic coal because it was cheap. However, India has already made it clear that it would reject any proposal in Paris that could potentially restrain its ability to use domestic coal.

“We are not at all apologetic of using coal. The US  and the West have developed on the back of cheap energy — coal — for the last 150 years ramping up their coal consumption from 0.5 metric tonnes in 1870 to nearly 4.5 metric tonnes per capita few years ago”, said Goyal, adding, “We are not responsible for the problem. Our share is only 2 percent in the global greenhouse gas emission. It is a problem accumulated over last 150 years.”

A key negotiator added that from 1990 till about 2012 only a few European nations reduced their coal consumption. China, in a deal with the US last year, promised to peak its emissions by 2030, indicating a continued reliance on coal over the next decade.

India’s lead negotiator at COP21, Ajay Mathur, said: “We have committed that the world will move to a path of less than 2 degree so countries will need to do more. We need the developed nations to take the lead and show ambition for 2020 target.”

The annual United Nations climate conference formally began in Paris on the evening of Sunday 29 November, a day earlier than originally planned. On Monday, leaders of some 150 nations set the stage for a global agreement with a series of speeches.

The Indian ministers and negotiators seemed relaxed and confident about India’s role in this climate talks. They were looking forward to arrival of Prime Minister Narendra Modi, who reached Paris yesterday night after addressing the nation on climate change.

On Monday, Modi formally opened the India pavilion which has grabbed eyeballs this year — it was the first time India had put up a pavilion at the annual conference to showcase its philosophy and approach towards climate change.

Later in the day, Modi was set to launch a global solar alliance, bringing together tropical countries to promote solar energy. At least 30 heads of states signed up to attend, Indian officials said.