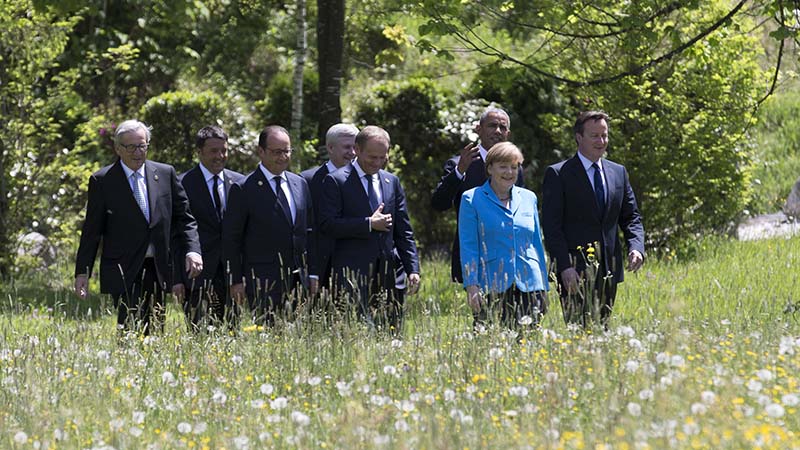 The G7 has declared that the global economy must be decarbonised this century, in a statement hailed by campaigners.

German chancellor Angela Merkel was lauded for forging consensus among the world’s major economies to reverse centuries of fossil fuel-based development and usher in a clean energy future.

The backing of the world’s pre-eminent economies gees up chances of almost 200 nations agreeing to a long term goal in Paris this December to reduce the net release of heat-trapping gases to zero.

After two days of talks, the joint declaration said: “deep cuts in global greenhouse gas emissions are required with a decarbonisation of the global economy over the course of this century.”

The countries agreed to back the “upper end” of a 40-70% reduction of emissions by 2050 on 2010 levels, curbs the UN scientific bureau says are needed to stabilise temperatures at 2C above pre-industrial levels – and avert catastrophic climate change.

Angela Merkel: The green realist who could make or break a climate deal

“Though the precise wording is slightly different, this is in effect a strong statement that the Paris agreement should have a long-term goal of net zero emissions in the second half of the century, as many developing countries are calling for,” said Michael Jacobs, advisor to the Global Commission on the Economy and Climate.

“To get the US, Canada and Japan to agree to this is a remarkable achievement by Angela Merkel and Francois Hollande, and a good sign for the negotiations.”

Merkel, once called the “climate chancellor” and with experience of the UN negotiations, brokered the agreement with Japan and Canada, perceived to be hold-outs given weaker action on the climate.

Canada is promoting tar sands extraction, while Japan has become reliant on fossil fuels since the Fukushima disaster triggered a flight from atomic power. 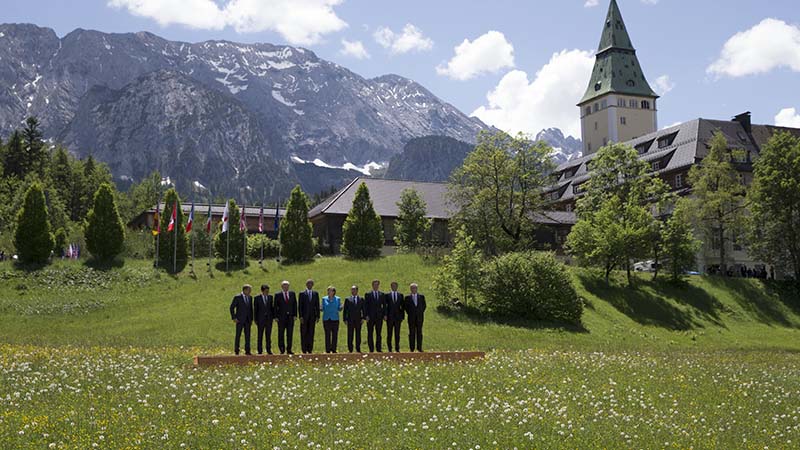 Leaders at Elmau Schloss castle in the Bavarian alps

“This long-term decarbonisation goal will make evident to corporations and financial markets that the most lucrative investments will stem from low-carbon technologies,” said Jennifer Morgan of the World Resources Institute.

As fossil fuel emissions are scaled back, analysts see the underground storage of carbon dioxide and large scale tree-planting as critical to get to “net zero”.

The G7 will send a strong signal to other countries laying out climate plans, and shift the pattern of climate politics, said Nick Mabey, CEO of E3G, a thinktank in London.

“By agreeing to decarbonise the global economy inside a strong system of rules they have set a benchmark for emerging economies such as China to match,” Mabey added.

While the statement shows support for a long-term climate goal, it is less strongly worded than some others.

Networks representing 6.5 million businesses last month called for net zero emissions “well before the end of the century”, with some urging carbon neutrality by 2050.

“The course is right, but more speed, ambition and specific actions are needed,” she said. “Developing countries are ready to move fast and far on renewables, but they need finance and technology from rich countries to do it.”

As well as supporting a science-based approach, the G7 committed to extend insurance coverage to 400 million people vulnerable to climate impacts and accelerate renewable energy in Africa.

They also vowed to track progress of countries’ ability to “promote increased ambition over time”, with a mechanism to bind countries to deeper cuts at certain time periods.

While climate was high up the agenda, delegates also held discussions on conflict in Ukraine, Greece’s possible exit of the Eurozone and ISIS.