Meet the climate scientists running and cycling to Paris 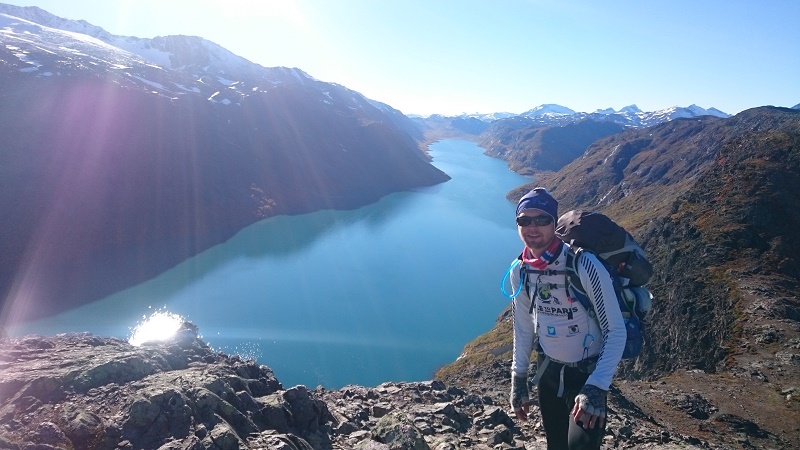 For Daniel Price, the toughest stretch was cycling across the Gobi Desert. For Erlend Knudsen, it was running through a two-day snowstorm in the mountains outside Bergen, Norway.

Their journeys are not over. These two polar researchers have swapped physical science for physical exertion, on a mission to spread awareness of climate change.

They are on twin odysseys from the Arctic and Antarctic to Paris, France, where diplomats meet to strike a global climate deal next month.

“Following the discourse on climate change becomes increasingly frustrating when you are a scientist,” Price tells Climate Home from Salzburg, Austria.

“There is this huge segment of society that doesn’t care or understand. I realised my parents didn’t even know what COP21 [the 21st Conference of the Parties in Paris] was and my friends really didn’t understand the urgency of it either.

“That was the motivation to communicate the problem in a new way.”

Price finished his doctorate studying Antarctic sea ice last year and thought of breaking out of the academic bubble.

He Skyped his friend Knudsen, who was in a similar situation on the other side of the world. The pair had met at a summer school in Svalbard, a rugged Norwegian outpost in the Arctic Ocean, four years ago.

Knudsen says: “As we got to the end of our PhDs, we both felt we were spending too much time in our offices and not enough time communicating our research. Independent of each other, we both had the same kind of mindset about that.”

It is a common gripe among climate scientists that their warnings about the gravity of the problem are not translating into urgent action.

Between 90 and 97% of relevant experts agree human activity is the main driver of global warming, various studies have found. Yet most lay people are either unaware of climate change or misjudge the level of consensus.

In developing countries like India, Bangladesh and Egypt, some two thirds of people have never heard of the problem, according to Gallup data.

In the rich world awareness is higher, but citizens perceive the evidence as more uncertain than it is. Only 57% of US adults think scientists “generally agree” people are making the world hotter, a recent Pew survey found.

Some of the most significant climate impacts are found at the North and South Poles, which are warming faster than the global average.

Melting ice sheets are causing sea levels to rise, posing a threat to hundreds of millions of people living in coastal regions worldwide.

Scholars like Price and Knudsen brave harsh, icy conditions to gather data and sharpen up predictions on the rate of change. Fresh from the frontiers of climate science, they wanted to share that experience with others.

Price would cycle from the South Pole and Knudsen run from the North – or as near as possible – giving talks along the way.

They had a “lucky break” at the start, says Price, when the UN Development Programme (UNDP) signed up as a partner.

“I was coming through all the developing countries. We would put together local stories on climate change issues.”

For us much of #Bangladesh has been about a @UNDP commissioned doco on #RisingSeaLevels. Here Michael lines up a shot pic.twitter.com/kXZggsZiyl

He met government officials in Indonesia to talk about renewable energy and shot a documentary on sea level rise in low-lying Bangladesh.

All along the route, cycling was a hook to get people interested, with 500 bikers joining a demo in Jakarta.

“It gives a fantastic platform,” says Price. “When I started the project, I thought this journey would work, but I didn’t really think how effective it would be with the media.”

He hasn’t quite cycled the whole way. Rather than skid across the McMurdo ice shelf where he did his fieldwork, Price pedalled off from New Zealand in April.

Russia would only grant a transit visa, allowing enough time to catch the Trans-Siberian Express but not to make it across under his own steam.

And the UNDP collaboration involved some travel back and forth. The pair promised to offset the emissions of unavoidable flights using myclimate.

#Beijing to #Ulaanbaatar in 9 days, how did @ddfprice do it? Read here: http://t.co/JURFx7SFhn #travel #COP21 pic.twitter.com/XJNbC9FS4x

Even finding food could be quite a mission at times due to scarcity… and language barriers. #GobiDash #RoadtoParis pic.twitter.com/Ejstc7xhhR

Those detours aside, Price will have cycled 10,000km by the time he arrives in Paris, covering Australia, Indonesia, Singapore, Malaysia, Thailand, Bangladesh, China, Mongolia and Europe.

Equipped with a British-made Brooks saddle – “a godsend” – he has managed to avoid saddle sores, despite a gruelling schedule.

His longest day was a 250km stretch in the Gobi Desert. Joined by a friend, he covered Beijing to Ulan Bator in nine days.

“Now I am thinking it was a little bit insane,” Price admits. “We would stop for lunch and set up a tent just to get out of the sun, it was so hot.

“We met nomadic herders with big herds of wild horses. It was brilliant… in that region climate change is pretty apparent, they are struggling with desertification.”

In Norway, Knudsen had cold, not heat, to contend with. Setting off from Tromso in August, conditions were summery enough, but he ran into a blizzard outside the southerly city of Bergen a month later.

“That was a bit sketchy,” says Knudsen. “It was really slippery, really cold with no visibility. There was no-one else there.”

Determined not to use a back-up car, he ran carrying 12-15kg of gear in a pack.

“The toughest thing is the mind part. The thing that made it worth it was the people I met along the way. People took me in and gave me shelter for the night.”

Exhausted from the 1,900km stretch, Knudsen passed the baton to friends in the UK, who are running Edinburgh to Cambridge as a relay.

@2050ClimateGrp – Glad you guys could make it out to the @PoletoParis #UK launch yesterday! Thanks for the support! pic.twitter.com/popE6Syh5R

Recruiting volunteers showed some of the limitations of outreach. “It is easier to get people interested in climate change issues to run rather than get runners to run for something other than themselves,” he observes.

Knudsen is speaking at schools, universities and conferences in the meantime, before pounding a path from Cambridge to London, then Brussels to Paris.

When they get to the French capital, Price and Knudsen plan to hold a side event at the critical climate summit.

For all the alarming implications of their own research, they aim to focus on opportunities to tackle burgeoning emissions.

Knudsen agrees: “We have so many tools already when it comes to charting a path to a sustainable future. We just need to start using them…

“The climate conference in Paris will potentially be a big step in the right direction and a very, very important and needed step. We have waited so long.”