Recent negotiations saw calls for international media to offer a “balanced” picture of plans for a global deal, but the picture is not as binary as many suggest 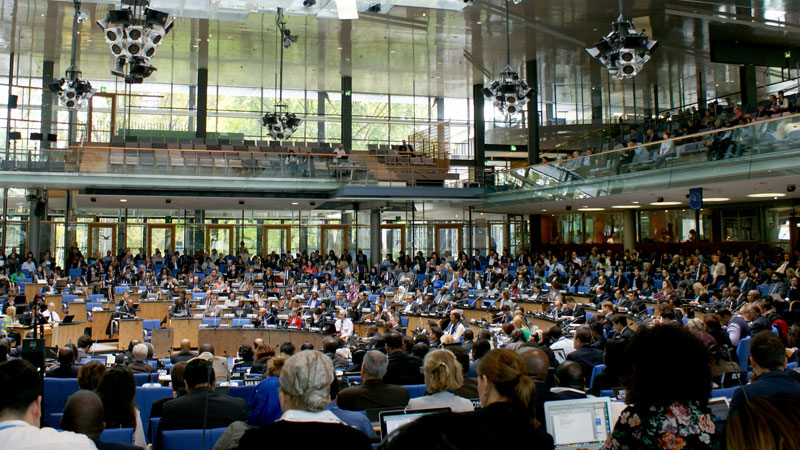 Negotiators meet for one of their many intersessional climate talks in Bonn (Pic: Ministerio del Ambiente/Flickr)

Who controls the narrative around global climate talks?

That question was brought to the fore last week at UN negotiations in Bonn by a 134-strong bloc of developing countries, which accused the international media of a Western bias.

G77+ China represents a whole range of interests, from small islands in danger of submersion to powerful emerging economies.

As negotiations on a UN climate deal neared the Paris endgame, it wasn’t about to let wealthier players have everything their own way.

“We hope that the international media, which is so familiar with the narrative of developed countries around climate change, understands us when we approach this issue from a different perspective,” it read.

The narrative, argued the letter, was a “simplistic” perspective that suggested the world had changed since 1992 due to huge economic gains by many developing countries.

“If the world has really changed so much, we ask why it is that after all these decades all our members remain developing countries with little or no voice in global decision-making processes and institutions.”

Looking round the journalists in Bonn, you could argue the world hasn’t changed.

Reuters, AFP, AP, Bloomberg, the FT and BBC were all well represented. Most reporters were from Europe, one was a US climate specialist, a few from Japan and a sole reporter from China’s state agency Xinhua.

There was no-one from India, South East Asia, the Middle East, Latin America or Africa, regions which can expect to bear the brunt of future impacts.

It perhaps explains why there’s often more of a perceived focus on carbon cuts (mitigation) rather than preparing for future climate impacts (adaptation) in media reports from global talks.

Yet industrialised nations don’t have all the running when it comes to influence on the media at the UN climate talks.

The woeful lack of finance on offer to developing countries and the rationale behind their requests are well covered by the platforms mentioned above.

NGOs sympathetic to developing countries are among the most active on the media circuit, operating across digital platforms and organising mini protests to highlight their concerns.

Fleishman Hilliard, one of the world’s top PR agencies, runs Brazil’s communications, ensuring a conduit to its team on the ground.

China’s state-run media relentlessly pumps out its line on the talks, while India’s negotiators frequently leak inside information to national papers.

The small island developing group of countries (AOSIS) punches above its weight thanks to a tiny band of proactive press officers.

On twitter – the mixed blessing of modern reporting – you will find a strain of anger towards the US and other developed countries for a perceived lack of climate action.

Report: UN calls for ministers as talks head to Paris

As Saleemul Huq, a Bangladeshi scientist argues in his latest blog, the likes of India, China and Brazil have the media clout to look after themselves.

That’s not the case for the 100 or so least developed and vulnerable countries taking part in these negotiations.

They lack a voice and many quietly despair at a narrative solely seeking to pit 1992’s rich against 1992’s poor, when what they need are promised funds to green their economies and radical global emission cuts from all major polluters.

Diseko’s letter suggests that all the G77 members are still developing countries with no influence in global institutions. That’s a bold call ignoring present and future realities.

China has a permanent seat on the UN Security Council, the BRICS group is growing in influence and all members of the world’s most powerful oil cartel, OPEC, sit in the G77.

Saudi Arabia, Singapore, Qatar, Kuwait and the United Arab Emirates are rated in the World Bank’s top 10 for global per capita incomes.

The note was – perhaps – a clever ploy at a moment during the Bonn session of talks when the G77 group felt it was making real ground in clawing back some key demands on finance and carbon cuts.

Still, the framing seemed clumsy, offering an intriguing insight into mindsets as these negotiations hurtle towards an endgame in Paris next month.

“The idea that we are mostly victims that need paychecks from the developed world no longer captures the psychology of our capitals and establishments.”