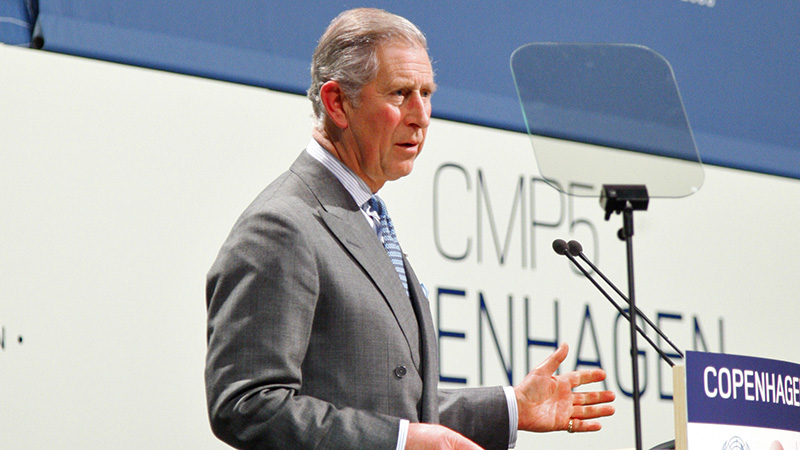 Prince Charles will tell world leaders they have one last chance to protect Planet Earth when he addresses the opening session of the 2015 UN climate summit in Paris on 30 November.

The heir to the British throne, a passionate conservationist, revealed today he has been invited by France president Francois Hollande to take part in the meeting, called COP21.

“We can’t possibly allow [warming] to be 4C as scientists have warned… a big increase I think it will be impossible to adapt to,” he said at an event to promote forest protection in London.

“Billions of people and what is left of the rest of a rapidly diminishing creation depend on whether this time real concerted action – not just words – can be taken.”

The Prince was joined by the heads of environment from the UK, Brazil and France at a one-day meeting held at Lancaster House in London.

Chief executives of top multinationals Unilever and Marks & Spencer were also present, along with representatives of the UN, development banks and civil society.

Around 90 million hectares of tropical forest were lost between 2000 – 2010, according to the World Resources Institute, with the greatest losses in the Amazon and South East Asia.

Leading drivers include demand for pulp and paper, logging and clearances to grow lucrative palm oil crops. This is contributing to the degradation of 80,000 square kilometres of virgin forest every year.

Tropical deforestation releases around 0.9 gigatonnes of carbon (GtC) a year, equal to 8% of global CO2 emissions, while existing forests absorb 1.2-1.8 GtC a year.

Globally, the transformation of 13 million hectares of forests a year into pastures for animals, croplands or other industrial uses accounts for 20% of annual emissions.

France’s environment minister Segolene Royal said forests were the “victims and solutions” of climate change, announcing a day in Paris will be focused on reducing degradation.

“What is at stake in one month’s time is about harmony… harmony between mankind and nature which seems to be often compromised,” she said.

Royal said she hoped the presence of 80 heads of state on the opening day of talks in Paris would ensure it did not collapse in the way a similar 2009 effort to secure a climate deal ended.

US president Barack Obama, India PM Narendra Modi and China’s Xi Jinping have all confirmed they will make the first day of negotiations.

“Nothing should be taken for granted until the very end… and one of the reasons in the failure of Copenhagen was the lack of involvement of major political leaders,” she said.

“This is why we have invited the heads of state to attend a special session. Their involvement will be key – expect them to give a strong political mandate to negotiators.”

Former Friends of the Earth chief Tony Juniper, now an adviser to the Prince, said Thursday’s meeting was part of a wider drive involving governments and business to protect remaining forests.

“My experience is that [Prince Charles] comes across as a trusted convenor and commentator,” he said.

“He has no axe to grind, he has 45 years of personal passion and experience and he does have a role in building that role of trust.”

Last year governments in New York committed to halve natural forest loss by 2020 and end it by 2030, which if achieved would be equal to wiping out the annual emissions of the US.

In December 2014, eight Latin American countries made a further pledge to restore 20 million hectares of forest, an area five times the size of Switzerland.

A Paris climate deal is likely to signal further support for a market-based plan to pay local communities and regional governments to protect existing forests – known as REDD+.

Still, Juniper admitted efforts to control rates of deforestation are radically different across the planet, citing fires in Indonesia’s forests that the government admits are now out of control.

Stronger partnerships between forest countries, businesses and donor governments are needed to reverse this trend, he added.

“The forest side of the climate equation could be one third of the solution to climate change… this is absolutely huge and one of the most cost effective things the world could focus on right now,” he said.

“This meeting is about thinking through how a consensus can be strengthened ahead of Paris.”