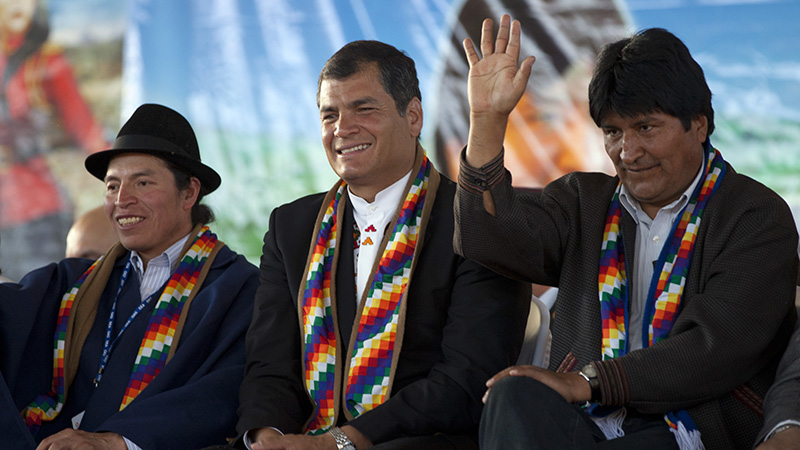 A grassroots event in Bolivia to amplify the voice of the poor in climate talks will be undermined by the host’s dash for oil and gas in protected areas, analysts say.

This weekend’s World Peoples’ Conference on Climate Change and the Rights of Mother Earth will be heavy on anti-capitalist sentiment, chaired by leftist president Evo Morales.

A visit by UN chief Ban Ki-moon lends weight to the three-day affair in the Andean town of Tiquipaya, which aims to bring together activists from civil society and indigenous movements from 35 countries.

The previous edition in 2010, organised in the wake of the Copenhagen summit fiasco, ended in a call for a world environment court and deepen carbon emissions cuts for wealthy countries.

But NGOs have accused Morales of hypocrisy after he passed a raft of energy decrees that open up national parks for resource exploitation, infringing on indigenous territories.

The Aymara Indian leader says the measures are vital to speed up consultations and has vowed to compensate communities and safeguard vulnerable eco-systems in the 22 zones. Nonetheless, the plans have seen several protests erupt.

“There’s an obvious contradiction between Morales’ great environmentalist discourse and a decree that allows an oil company to enter protected areas,” said Jorge Campanini, of Cochabamba-based CIDEB, which tracks extractive activity in the country.

That certainly won’t be scrutinised at the government-led event, added Campanini, whose organisation is among four recently blacklisted by the state for its pronouncements. Human Rights Watch has expressed concern over growing pressure on NGOs that criticise the authorities.

One non-invited group Mesa 18 is planning to gatecrash the event to highlight these contradictions. But with a reported 3,000 police mobilised and security cordons set up, Campanini doubted they would be able to deliver their message.

The landlocked country, which relies on hydrocarbons for over half of export revenue, is recoiling from a collapse in world energy prices. It is a net petroleum importer, producing a minor 67,000 barrels a day in 2014.

Morales, who came to power in 2006, has famously browbeaten wealthy countries for causing climate change and demanded they do the heavy-lifting in cutting emissions.

“We feel betrayed due to so much deceit and agreements that are never completed,” he said at last year’s round of talks in Lima, berating the West for “ecocide”.

Morales had a point. Bolivia accounted for just 0.2% of global greenhouse emissions in 2012, according to the US-based CAIT initiative.

One of South America’s poorest states, it arguably needs to exploit resources to finance lauded social programmes that have slashed poverty rates.

But its contribution to global warming is not insignificant. If you include pollution from huge forest fires, as EU database EDGAR does, its 2012 output rises to 1.2% of global emissions. 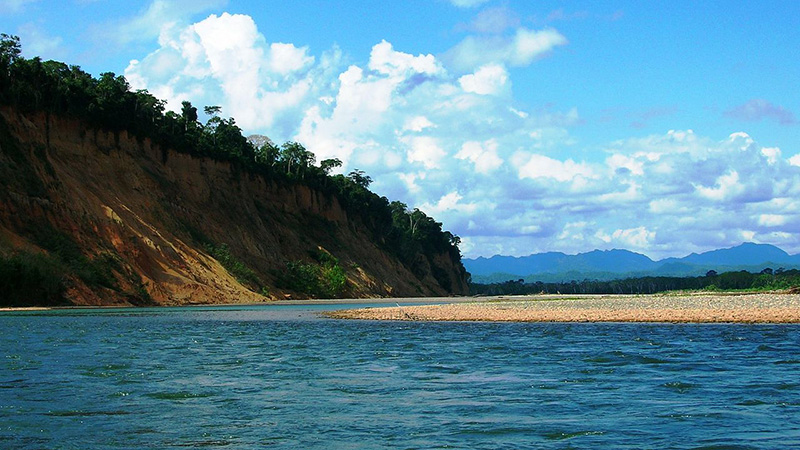 One of the planet’s most biodiverse spots, Madidi National Park in north-west Bolivia is one zone green-lighted for oil and gas exploitation (Flickr/ Wikimedia commons)

That makes it the largest carbon polluter not to submit a national pledge towards this December’s talks in Paris by the UN’s 1 October deadline, outstripping petropowers like Saudi Arabia and Iran.

National plans or INDCs are the building blocks of a proposed climate agreement, which aims to cap warming from pre-industrial levels to 2C.

Analysts suggested Bolivia could use the conference platform to announce its pledge, although the government has been silent on the subject.

Bolivia’s ministry of environment and water, and climate negotiator Rene Orellana did not respond to Climate Home’s requests for comment.

Its non-participation is bound to be a bone of contention for the UN’s Ban, as well as French foreign minister Laurent Fabius. Both will fly in from Lima, Peru, where they are appearing at the IMF and World Bank annual summit this weekend.

“Bolivia has in part excluded itself from important components of the negotiations as one of the few countries that hasn’t presented an INDC for Paris,” said Eduardo Gudynas, an Uruguayan academic at the Latin American Centre of Social Ecology (CLAES).

Other Latin American countries including Colombia, Peru, Brazil and Chile have volunteered greenhouse gas curbs to show willing in a new climate regime.

Bolivia’s efforts to shine a spotlight on the rights of Mother Earth in the context of a new climate pact are a necessary contribution to the debate, Guy Edwards, a Latin America expert at Brown University said.

“However these conferences cannot simply look at the global context but also need to reflect domestic realities,” he added.

“Failing to discuss these issues together would suggest that organising the conference was more a publicity exercise than a meaningful debate about sustainable development and climate change.”

Jaime Aparicio, the country’s former ambassador to the US before Morales took power, was more direct.

“There’s no authentic concern about the environment. It’s all a political game to earn a reputation as someone who defends indigenous people, Mother Earth or Pachamama,” the now political consultant told Climate Home.

With Bolivia expanding its hydrocarbon frontier and growing agribusiness like soya, analysts said it was doing little to curb emissions growth.

“It has no clear ecological plan,” said CLAES’ Gudynas. “The main source of emissions is from farming and changes in land, and deforestation, and it can’t manage them.”