Country wary that end of 50-year armed conflict could bring spike in deforestation, as it submits contribution to the UN 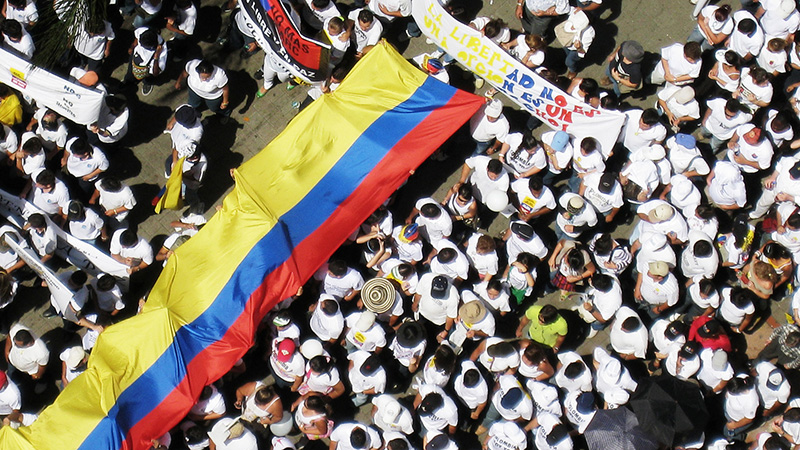 Demonstrators hold an anti-FARC march. The Colombian government and FARC are undergoing negotiations to end the internal conflict (Flickr/ Xmascarol)

Reconciliation with Latin America’s strongest left-wing rebel group, the FARC, will test Colombia’s resolve to see through its climate policies, the government said on Monday.

Colombia became South America’s first country to submit its contribution to a UN global warming pact, setting out how it will slash greenhouse gas emissions and adapt to extreme weather.

The pledge outlined a 20% cut to greenhouse gas emissions by 2030 from a business as usual projection. That could rise to 30%, conditional on international cash to aid the mitigation effort.

But it warned the end of decades-long conflict, while welcome, could bring increased pressure to clear forests, jeopardising climate goals.

In its communication to the UN, the government said it had considered the “potential impacts” of “post conflict scenarios in different regions”.

“In the past, peace processes elsewhere in the world have been associated to negative impacts on the environment, due to, among other things, migration patterns that increase pressure on natural resources in the most vulnerable areas, often resulting in increased deforestation.”

But its climate strategy, such as better use of water resources, had “the potential to facilitate the consolidation of peace territories,” it said.

President Juan Manuel Santos has staked his legacy on ending the brutal conflict that has killed more than 260,000 people since 1958 and displaced around 5.7 million.

Two-year-old peace talks with the FARC appear to be nearing their final stages, following deals on land reform and severing the group’s link with the illegal drug trade.

Though the freighted issue of transitional justice could still scupper a deal, with the rebels regularly breaking unilateral ceasefires, as they resist jail time for members.

The management of Colombia’s forests is key to its “intended nationally determined contribution” (INDC). Agriculture, forestry and other land uses made up 58% of its emissions in 2010 – some 130 million tonnes of CO2.

Forest covered over half of its territory in 2011, with 14.1% classed as biodiverse or carbon-rich, according to the UN’s Food and Agricultural Organization.

“The lack of property rights has had a negative impact on conservation,” said Jorge Restrepo, director of the Conflict Analysis Resource Center in capital Bogota.

“It’s one reason large swathes of the country are used for illegal crops like heroin, coca, or cannabis. Growers move along the landscape – a constant and permanent destruction of nature.”

A US-funded anti-narcotics push has seen Colombia’s share of the global cocaine market fall from 90% a decade ago to around 50%.

Yet with stability comes a new threat: large scale agribusiness.

As peace talks grind on, Restrepo was certain that Colombians had “turned the page” on conflict and would make a slow return to security.

That could see renewed involvement in illegal mining and drug trafficking.

“Colombia has a very serious institutional weakness. The intentions are good but to carry out widespread monitoring is difficult,” Milena told RTCC.

In its plan, the government is projecting an average 3% economic growth rate up to 2050. Lifting people out of poverty – with 44% falling below the line in the countryside – is a priority.

So too is building resilience to climate impacts: weather phenomenon La Nina visited losses of $6 billion in 2010-11.

As for energy emissions, the plan is to avoid dirtying one of Latin America’s cleanest electricity systems. Hydropower meets the bulk (68% in 2010) of its electricity needs, though coal mining and oil production is rising. The country’s 0.5% share of global CO2 is perhaps small for its 48 million citizens.

For Eduardo Behrentz, an academic who has advised the government’s climate policy since its inception in 2010, Colombia was doing the unprecedented.

“We importantly have the political will to make carbon reductions. Everything starts from here,” the University of the Andes professor in Bogota tells RTCC.

“It’s a learning curve, though we hope it consolidates the economy in its developmental state.”