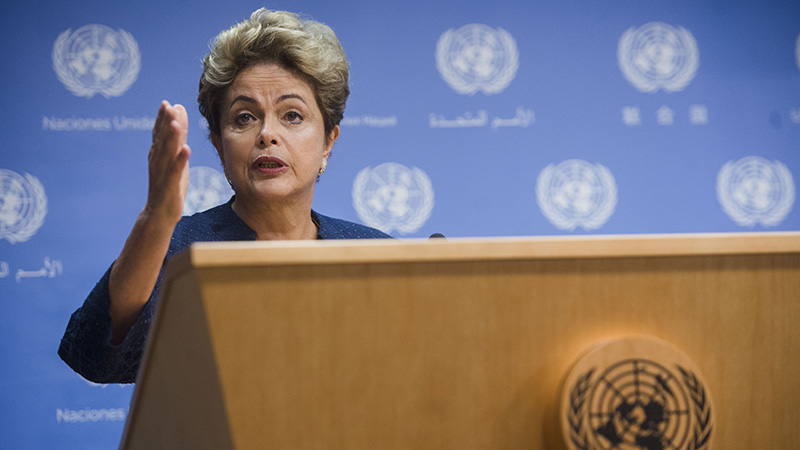 Brazil, one of the world’s major carbon polluters, committed on Monday to slashing greenhouse gas emissions 37% by 2025 from 2005 levels.

That could deepen to 43% by 2030, the country said. To meet this target it will eliminate illegal deforestation, restore and reforest 12 million hectares of degraded land and boosts its share of renewables in the energy mix to 45%.

The submission came a day after Brazilian president Dilma Rousseff announced the pledge on the sidelines of the UN General Assembly, aimed at building political momentum ahead of December’s Paris climate conference.

In a speech, Rousseff said the country’s goals were “just as ambitious, if not more so, than those set by developed countries,” given its 200 million population.

The South American country accounted for just under 6% of global emissions in 2010. Its pledge leaves India and Nigeria as the last major emerging economies to submit theirs to the UN, with only a few days to the 1 October deadline.

“This is an important shift because it offers greater certainty that emissions can be cut even as Brazil’s economy expands.”

A network of Brazilian NGOs called Climate Observatory noted the country had almost met its target already, however.

Brazil slashed greenhouse gases by 33% from 2005 to 2013 due to slowing deforestation, according to SEEG, Reuters reported.

“It’s significant that Brazil, among the world’s largest emitters, has the largest reduction target. But is insufficient considering the potential the country has to do more,” said Carlos Rittl, head of Climate Observatory.

The country said it would use its tropical forest expertise by helping developing countries move towards biofuels and develop systems to track deforestation.

Cooperation between countries in the Global South follows China’s surprise announcement it would provide $3.1 billion in finance to developing countries to tackle climate change, a sign of blurring distinctions of who should pay for global warming.