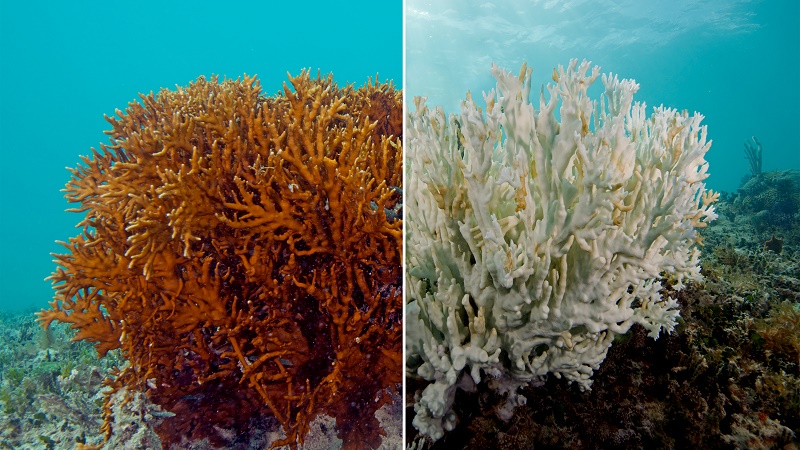 A fire coral in Bermuda, before and after bleaching (Pic: XL Catlin Seaview Survey)

Corals are bleaching across all the world’s oceans in only the third die-off of its scale in history, scientists revealed on Thursday.

These hostile conditions are expected to deplete more than 38% of the world’s reefs by the end of 2015, according to the US-based National Oceanic and Atmospheric Administration (NOAA).

Recent damage to corals in the Caribbean follows bleaching in the Pacific and Atlantic oceans earlier in the year, confirming the phenomenon as global in scope.

It has knock-on effects for species that rely on healthy corals for food, as well as for people who make a living from tourism or fishing.

“What really has us concerned is this has been going on for a year and is likely to last another year,” said NOAA coral specialist Mark Eakin.

The El Nino weather system, characterised by a period of warm water across much of the Pacific, is forecast to remain strong until early 2016.

When ocean temperatures stay higher than the seasonal average for weeks, corals can expel their colourful algae, leaving only white skeletons.

It can take 10-15 years for coral to grow back after such bleaching, with the sensitive ecosystem only regaining its former strength after 20-30 years.

While climate change brings hazards like heatwaves, intense storms and flooding above the surface, an estimated 93% of extra heat goes into the oceans.

That increases the risk of bleaching and could limit the ability of reefs to recover from shocks.

“We have got to recognise that coral reefs and almost every other ecosystem are not keeping up with changes in our climate,” Ove Hoegh-Guldberg, chief scientist at the Catlin Seaview Survey, told Climate Home. 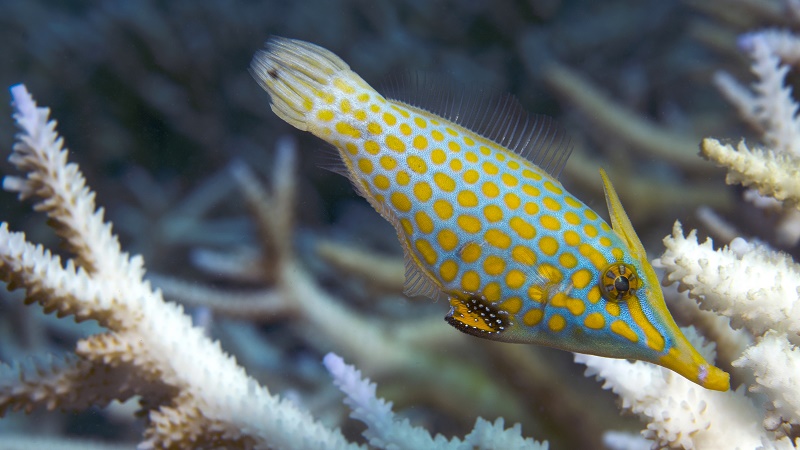 There was a glimmer of good news for reefs in July, when researchers reported some success in transplanting corals to cooler waters.

But Hoegh-Guldberg said it would cost trillions of dollars to roll out that approach on the scale required to halt or reverse coral’s decline.

Only global cooperation to rein in greenhouse gas emissions can give corals a chance of survival in the long term, he said, coupled with measures to prevent overfishing and pollution.

Countries are aiming to stabilise temperatures at 2C above pre-industrial levels with an international pact in Paris this December.

If they achieve that, Hoegh-Guldberg said, “we probably won’t experience reefs like we used to over the next few decades, but in the second half of the century, we could see coral come back.”