Heat-tolerant ‘immigrant’ coral could save reefs from extinction 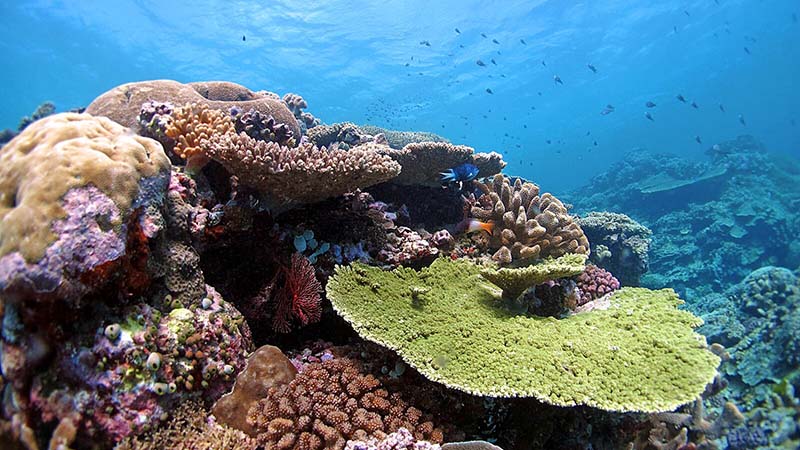 Some corals, like these along the Northern part of the Great Barrier Reef, can survive warmer oceans (Line K Bay)

As hotter, more acidic waters damage the world’s reefs, scientists have discovered methods to boost survival of the underwater structures.

Corals threatened by sudden temperature rises could be seeded with more heat-resistant forms to make them better cope with climate change, according to a study published in Science on Thursday.

Researchers crossed corals from naturally warmer areas of the Great Barrier Reef in Australia with those 300 miles south.

“Averting coral extinction may start with something as simple as an exchange of coral immigrants to spread already existing genetic variants,” said Mikhail Matz, associate professor of integrative biology at the University of Texas at Austin.

“Coral larvae can move across oceans naturally, but humans could also contribute, relocating adult corals to jump-start the process.”

Warmer waters cause the sensitive organisms to bleach as they expel pigmented algae in their tissues, revealing a white limestone skeleton. Deprived of a main food source, the nurseries for diverse marine life become brittle and vulnerable to storm surges.

The world’s reefs could be in the grip of the third mass bleaching event on record, as the El Nino weather phenomenon adds more heat to warming oceans. In June the National Oceanic and Atmospheric Administration declared “a full-fledged global bleaching event” was “likely”, though less than severe than 2010.

Reefs in the Pacific and Indian oceans have whitened and the Caribbean is expected to follow as summer reaches the northern hemisphere.

The UN’s climate science panel, the IPCC, says coral reefs face “severe threats from climate- and non-climate related stressors,” with many species of coral’s thermal tolerance set to be exceeded within decades. The rate of bleaching will be fastest in the Caribbean, it forecasts.

“This discovery adds to our understanding of the potential for coral to cope with hotter oceans,” said Line Bay, an evolutionary ecologist with the Australian Institute of Marine Science in Townsville.

Corals have displayed higher tolerance for elevated temperatures worldwide, though until now no one understood why some adapted differently, the report stated.

“This is occasion for hope and optimism about coral reefs and the marine life that thrive there,” Matz added.