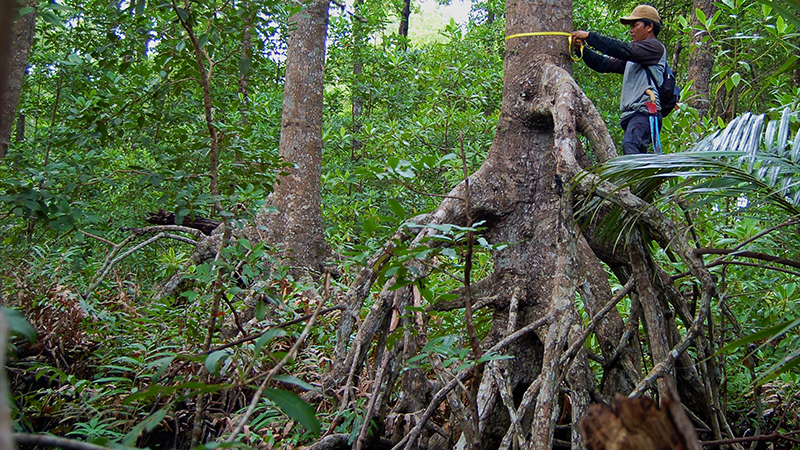 An Indonesian man measures the diameter of mangrove trees to estimate carbon stock.  Vast tracts of carbon-rich mangrove and peat swamp forest have been cut down by palm oil and mining companies (Flickr/ CIFOR)

Indonesia, the world’s tenth biggest emitter, has pledged to reduce its greenhouse gas emissions by 29% below business-as-usual projections in 2030.

The Asian country could broaden the target to 41% with international support, newswire Carbon Pulse reported on Wednesday after viewing the final draft document.

Environment and forest minister Siti Nurbaya Bakar confirmed the offer at an event in capital Jakarta, the Guardian reported, but gave few details on how it would be reached.

The draft sees another prominent emitter move to meet a 1 October deadline for “intended nationally determined contributions” to a UN climate deal.

The goal does little to extend the world’s largest coal exporter’s 2020 target of a 26% cut in emissions, rising to 41% with financial aid.

“Beyond 2020, Indonesia envisions an even bolder commitment to emission reductions,” the document said.

It appears to contradict the country’s pledge to halt deforestation by 2030, agreed in the New York Declaration on Forests last year.

Indonesia said it would protect its forests by marking 12.7 million hectares for sustainable use.

A report by the World Resources Institute on Wednesday said tree loss increased last year after falling in 2013.

The country is pressured to halt the destruction of its forests and peatlands, which have made way for palm oil plantations and mining.

The document repeated Indonesia’s aim for at least 23% of its energy needs coming from “new and renewable energy by 2025″.

A rapid expansion of coal-fired power generation made this target “too ambitious”, the International Energy Agency warned in February. The numbers “reflect political priorities rather than achievable targets,” it said.