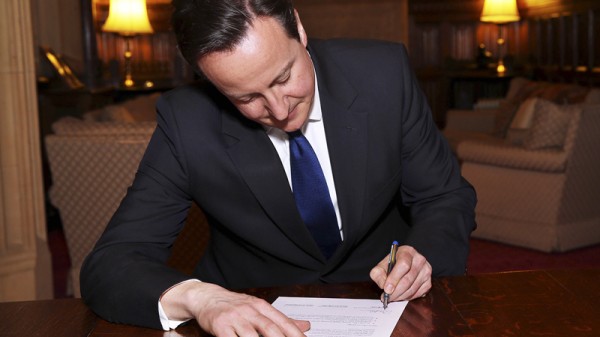 Prime minister David Cameron signed a pledge to back tough climate policies ahead of the 2015 general election (Pic: Stephen Lock)

In a letter to prime minister David Cameron they say cuts in support for wind and solar power, along with tax changes for low carbon cars, signal a lack of commitment to the green economy.

“We have, as yet, seen no positive new measures that would restore the health of the environment or grow the low carbon economy,” they write.

“This all-out attack on green policies undermines UK efforts to tackle climate change ahead of global talks in Paris,” said Craig Bennett, chief executive of Friends of the Earth.

“Without any real domestic action to tackle climate change this government will lose any credibility to influence others,” he said.

10 charities signed the letter – including WWF, Green Alliance, RSPB and the National Trust. They cite 10 policy changes made by the government since it won the 2015 election in May.

Five policies covering renewables and energy efficiency have been cancelled, five others covering fracking regulations, cleaner vehicles and the country’s Green Investment Bank are said to be weakened.

German wind turbine manufacturer Siemens, which is investing £160 million in a new factory in Hull, said it hoped to see more “clarity” soon.

A spokesperson for waste firm Veolia said “this isn’t a way to run a government” after incentives to generate power from landfill gas were cut.

Analysts say these changes are likely to see the UK’s greenhouse gas emissions rise, but the government has defended the moves, saying the policies were too expensive.

Officials at the energy and climate change department say support for low carbon and clean energy would put a £1.5 billion hole in its budget by 2020 without the changes.

In a speech last Friday at the headquarters of Aviva Investors, energy and climate secretary Amber Rudd said her priority was to keep bills low and cut emissions.

“Our support has driven down the cost of renewable energy significantly. As costs continue to fall it becomes easier for parts of the renewables industry to survive without subsidies.”

Rudd dismissed suggestions domestic UK green cuts would have any impact on the Paris talks, arguing it was still seen as a leader given its climate finance contributions and tough targets.

“I have been on these negotiations for over a year now. They do not centre around what renewable subsidy is supported in the UK or in any country,” she said.