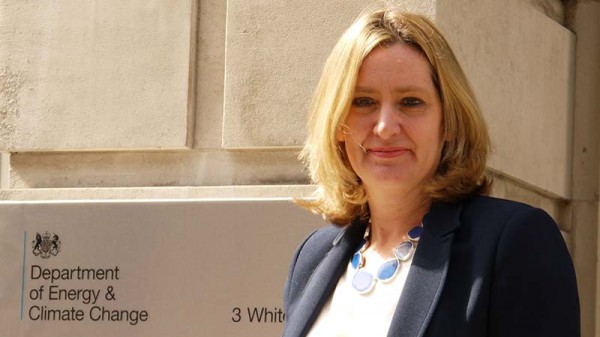 In a speech in the City of London, Amber Rudd will say curbing greenhouse gas emissions is essential to protect the country’s future security.

And she will add the UK is “lined up with the progressive countries of the world” in wanting a rules-based ambitious climate deal to be agreed in Paris at a UN summit this December.

“The economic impact of unchecked climate change would be profound.  Lower growth, higher prices, a lower quality of life,” she is to say.

Rudd’s speech – her first as secretary of state for energy and climate change – comes the day after the government scrapped domestic energy improvement project the Green Deal.

The move left many questioning the UK government’s commitment to the low carbon economy, comings days after support for wind, solar power and zero carbon homes was also cut.

But in a thinly veiled attack on previous governments, Rudd will make the case for market-led solutions to cleaning the UK economy, rejecting the “proto-socialism” of left-wing solutions.

“It cannot be left to one part of the political spectrum to dictate the solution and some of the loudest voices have approached the issue from a left-wing perspective,” she says.

“So I can understand the suspicion of those who see climate action as some sort of cover for anti-growth, anti-capitalist, proto-socialism.”

“With each passing day, this government puts an end to another green policy,” she added.

A statement from the government said future schemes needed to have wider reach and offer “better value for money”, adding it wanted to insulate a million more homes by 2020.

Alastair Harper from the Green Alliance lobby group said the government now faced a challenge to “assure investors the low carbon economy is a priority” after the slew of cuts.

Earlier this week 24 of the UK’s top scientific, medical and engineering bodies called on the UK to adopt tougher greenhouse gas slashing targets ahead of the Paris summit.

Emissions fell 8% in 2014, although the country’s independent climate advisors say that was partly due to a mild winter and is unlikely to be sustained.

Climate economist Lord Nicholas Stern, president of the British Academy, one of the signatories to the communique, urged prime minister David Cameron to show leadership on the issue.

“The UK led the world with both the modern scientific revolution and the industrial revolution, and must lead again now on the creation of a safer, cleaner and more prosperous world” he said.

“Tackling climate change is a responsibility for the whole world, but the UK has a special position at the forefront of international efforts.”