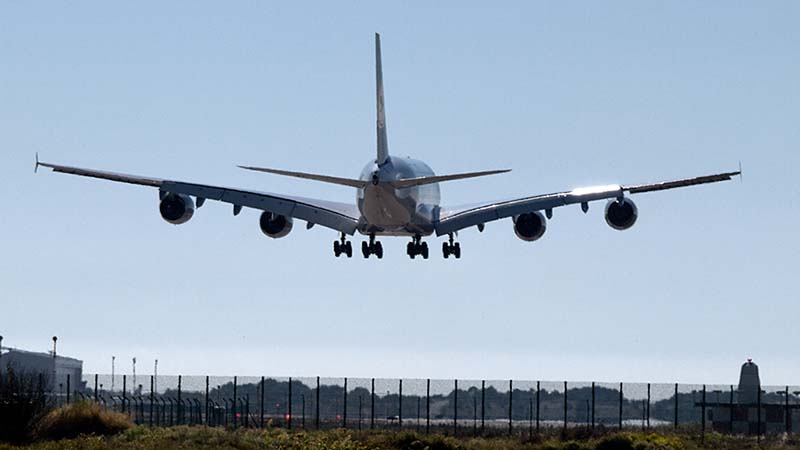 The future direction of UK aviation emissions is up(Flickr/ Tuquetu)

A government-appointed commission favoured expansion at one prominent London airport over another on Wednesday, which could jeopardise the country’s carbon-cutting targets.

The Davies Commission backed an extra runway at Heathrow, the world’s second busiest airport in 2014, over Gatwick to accommodate soaring passenger demand, as the UK grapples to keep one of its airports an international hub.

The long-running debate has split the cabinet, incensed affected residents and sparked a publicity war between the duelling airports.

Chancellor George Osborne said in a speech at the Confederation of British Industry last month: “When we get Howard Davies’s report on a new runway in the South East, we’re going to take the decision and get it built.”

But top-ranking MPs, including London mayor Boris Johnson are vehemently opposed. Flight paths from Heathrow will subject more people to high noise levels and at eight times the cost to the taxpayer than a runway at Gatwick.

That leaves a carbon budget of 160 million tonnes of CO2 a year. The government has allotted a quarter, 37.5MtCO2, of that to the aviation sector.

But even if no runways are built, emissions are projected to shoot through to 47Mt by 2050, according to the Department of Transport.

Heathrow leaves the largest carbon footprint. An extended runway would boosts its emissions from 16.6Mt to 19.9Mt under the government’s 2050 scenario. A new runway goes further to 20.5MtCo2.

Gatwick was the greener option, with emissions making a smaller jump from 3.9 to 5.3Mt.

Will a third Heathrow runway still bring economic benefits even as the UK’s ‘carbon budget’ is crimped by mid-century?

Sir Howard Davies says yes – as high as £10.2 billion – in a letter to chair of the Committee on Climate Change (CCC), Lord Deben. But radical conditions are required to damp surging demand from passengers.

First, a carbon tax of £330 a tonne. Pollution permits are currently trading for €7 a tonne (£5) of CO2, with higher end 2020 forecasts hitting €35/t. That’s a huge hike and could add hundreds of pounds to fares.

The lower carbon replacement for jet fuel “could be desirable in the long term”, according to the CCC. However “policy should not be planned on the basis of significant penetration of biofuels in aviation”, it said in 2013. Just 10% would do.

Even if the economic benefits were zero, there is still a case for expansion, the Commission argues. London airports can better connect the rest of the UK, and support longer-haul flights.

But Davies notes aviation’s carbon budget must be used as effectively as possible. That means fewer flights rationed by higher prices, and a march towards transport alternatives.

“It’s either got to be a new runway or the Climate Change Act,” Leo Murray, a director at the 10:10 global warming campaign group, told the Independent.

Aviation is one of the fastest-growing sectors in greenhouse gas emissions, jumping by three-quarters between 1990-2012. It accounts for 2-3% of global emissions, equivalent to Germany’s output.

Heathrow was taken over by Dubai last year as the world’s busiest airport, dealing with 68.1 million people to Dubai’s 71 million.

The UK’s Committee on Climate Change, its emission adviser, says the national growth in aviation must be limited to 60% on 2005 levels to meet its target for 2050.

The industry has a voluntary commitment to improve fuel efficiency 2% a year and achieve carbon-neutral growth from 2020.

Biofuels are crucial in the mix, but these alone won’t pin the sector to its loose goal of a 50% cut by 2050 on 2010 levels, analysts say. The era of cheap flights for holidaymakers needs to end.

And efforts to set up a carbon offsetting mechanism from 2020 are behind schedule.

In the absence of a global deal, some regions may make their own move to curb airline emissions.

Airlines operating between EU countries must cover their emissions with carbon allowances. External flights are not covered by the carbon market but that is up for reconsideration next year.

The US green regulator, the EPA, is moving to regulate the sector’s greenhouse gases on health grounds. The medical journal Lancet last week called climate change as the biggest threat to global health in the 21st century.