After the Pope’s plea, what do other faiths think on climate?

Scholars from Hinduism, Islam, Judaism and leading evangelicals explain why the environment matters to them 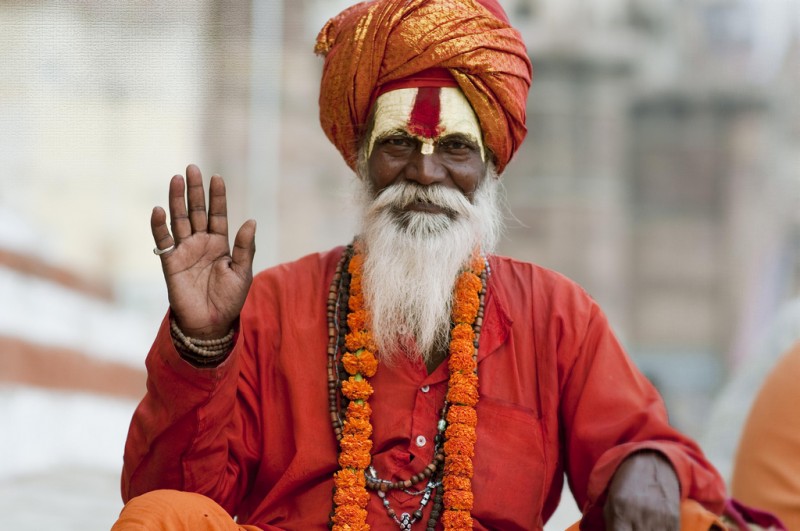 For Christianity, Islam and Judaism, it is care for divine creation. In Hinduism, there is Rta – the principle of natural order.

Every religion has its traditions of protecting the environment. The degree to which they are observed varies, as faith rubs up against economic and political realities.

This week’s encyclical, or letter from Pope Francis to his flock, has been widely hailed for its urgent call to action on climate change.

Coming six months before countries aim to strike a deal in Paris, it is an undeniably powerful intervention.

Yet for the thoughtful religious practitioner, the lengthy chapter on the gospel of creation is at least as important as the policy recommendations.

It is these ruminations on God’s love that could strike a chord with believers not previously attuned to environmental concerns.

And it is not exclusive to Catholics but addressed to “all people living on this planet”. So how is it going down with Muslims, Jews, Hindus and other segments of Christianity?

“He [Pope Francis} has got an incredibly friendly and warm personality and does very well in creating a sense of a big tent,” says Fletcher Harper, Episcopal priest and director of GreenFaith.

“I have seen lots of groups, Christian and otherwise, wanting to add to the chorus… There is a real halo effect.”

Even among the ranks of US evangelicals, better known for hostility to climate science, there may be some receptiveness to the Pope’s bible lesson.

Reverend Richard Cizik certainly hopes so. A lobbyist for the National Association of Evangelicals for ten years, he was forced to resign in 2008 after airing views on climate change and gay marriage that were unacceptable to many on the religious right.

He “had a conversion” to the climate cause after a week-long outreach session at Oxford University in 2002 by climate scientist and Methodist John Houghton.

His curiosity undimmed, Cizik has just returned from Iran, where he had an audience with a grand ayatollah. The Islamic leader didn’t get round to answering his question about climate change.

Back home, he tells RTCC, many preachers are privately convinced of the case for action but “afraid” to say so. “What the papal encyclical will do is give courage to those evangelicals.” 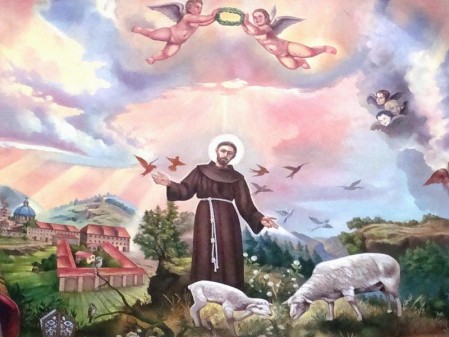 Saint Francis of Assisi, the namesake of the Pope, is cited as an model of “integral ecology” (Enrique Lopez-Tamayo Biosca)

Katharine Hayhoe, a climate scientist and evangelical who takes on many a sceptical audience with a combination of evidence and values, is also cautiously optimistic.

Some 15-25% of evangelicals approve of the Pope but don’t accept that people cause climate change, she writes in the Conversation. Those are the ones who might be open to persuasion.

“For any who take the Bible seriously, it must change minds,” says Hayhoe. “The encyclical is not proposing any new doctrine; it is not preaching any new message.

“It is simply reminding us that at the foundation of Christianity is one simple word: LOVE. And that word cannot fail to resonate in the hearts of all who believe, regardless of their denomination.”

In the synagogues of London, says Rabbi Jonathan Wittenberg, “people are absolutely talking about it”.

In the Jewish community, he thinks, “the anti-science lobby will not be large… more worrying to me than denial is heedlessness”. Jews may think climate change doesn’t affect them or comes second to issues like anti-semitism.

Wittenberg, who has solar panels on his house and is hawkish on waste, hopes the encyclical “will galvanise actions that are slow in coming”.

The idea of having a responsibility as stewards for the earth is common across Judaism and Christianity – and much of the text cited by the Pope is from the Jewish Bible.

As of this week, 360 rabbis have signed their own call for “eco-social justice”.

For Jews, this is a sabbatical year, the one period in seven they are supposed to let the earth rest. While that directive may not be taken literally much outside of Israel, it serves as a caution against overstretching natural resources.

It is tied in with tikkun olam, or “repairing the world”, explains Rabbi Lawrence Troster of GreenFaith.

Troster has been writing on Judaism and the environment for decades, but admits it “has never been very central” to his community’s agenda.

That is changing: “There have been a lot of grassroots efforts that have been percolating up. It has now really come back to the fore.”

Seyyed Hossein Nasr, a leading Islamic philosopher, has also found his work on the environment slow to take root.

“At first it was a deaf ear from everyone,” he says. “My first listeners were Westerners. It is only now that my teachings about the environment are getting traction in the Islamic world.”

No religion has the same centralised authority as the Pope. Islam has some voices on the environment, says Nasr, but they are “not at all strong”.

“When a preacher goes to preach in the mosque, he has to address what is most urgent for people… It is very difficult to start talking about the environment – you first have to survive. But I don’t think this is an excuse. It is a very urgent matter.”

Religion does not operate in a vacuum and some of the most devoutly Islamic countries in the world are also the most oil-rich.

That inevitably makes it harder to talk about slashing greenhouse gas emissions, which means phasing out the fossil fuel that made them wealthy.

“Of course these countries like Saudi Arabia don’t want to talk about cutting down oil consumption in order to save the planet,” says Nasr.

But for those paying attention: “Islam has a vast environmental teaching, which is dovetailed into everyday life.” 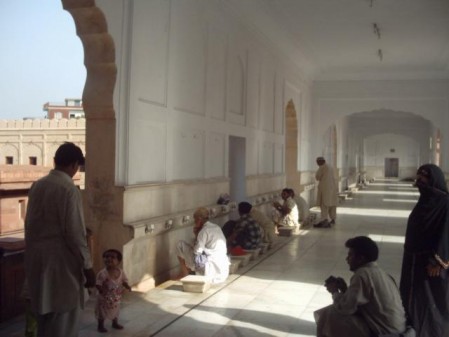 Muslims wash their hands, forearms, face and feet before they pray (Pic: Ajreddy)

Indeed, Green Muslims director Colin Christopher tells RTCC he was drawn to Islam about five years ago by its emphasis on conservation and moderation.

Worldwide, Muslims have started a month of daytime fasting for Ramadan, one of the five pillars of Islam.

They abstain from alcohol, are warned against excessive meat-eating and must use water sparingly when they carry out ritual washing before prayer.

“Our harmony with the environment around us is not only going to be an economically smart move,” says Christopher, “it is also a spiritually nourishing exercise.”

Narendra Modi: Yoga can help the fight against climate change

After Christianity, with 2.4 billion adherents and Islam on 1.6 billion, Hinduism is the third biggest religion in the world.

Its 1 billion-odd followers nearly all live in India, where carbon footprints are small more by necessity than choice. Most people eat little or no meat and more than 300 million lack access to electricity.

In this context, the Pope’s warnings against wasteful overconsumption have little direct relevance.

“In India, the topic of climate change at the grassroots level is not really in the vocabulary,” says Gopal Patel, of Oxford University’s Bhumi Project.

To those Hindus who are aware, the encyclical shows that Christians are taking seriously a problem that is having severe impacts on the subcontinent.

Around 20 Hindus are set to attend a conference of young faith leaders on climate change in Rome at the end of the month. It is timed around a march to St Peter’s Square celebrating the encyclical. 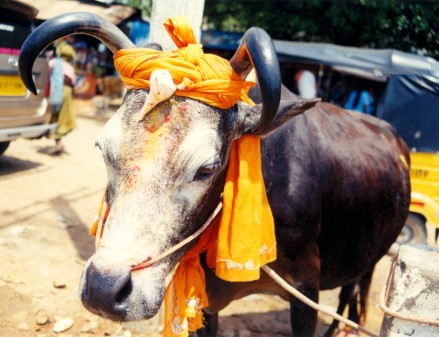 For Patel, there are important distinctions between the Hindu approach and Abrahamic traditions.

Instead of heaven and hell, Hindus believe in reincarnation. The typical “12 months to save the planet” narratives of Westerners don’t really fit with their ideas of cosmic order, he says.

“It is very black and white. Hinduism talks in shades of grey… more in terms of a long term changing of lifestyles.”

The modish expression of climate concern among churches is to divest funds from fossil fuels. Patel argues they should look to their diets rather than blaming others.

“Slaughter of billions of animals every single year is a much bigger contributor to the problem,” he says. “There is a karmic reaction to that, we are going to suffer for it.”

Whether or not you believe you’ll be punished for meat-eating in the next life, it is undeniably a significant factor in global warming.

A quick run of the UK government-backed Global Calculator, which allows anyone to model the impact of different actions on emissions, shows the impact.

If everyone adopted Indian levels of meat consumption, which are 20 times lower than in Europe, it would prevent an estimated 3,480 gigatonnes of CO2 emissions by 2100. That’s a 45% reduction on business as usual, without any other measures.

There may be no mention of meat in the encyclical, but it does invite everyone to join the conversation.

The Pope writes: “I urgently appeal, then, for a new dialogue about how we are shaping the future of our planet. We need a conversation which includes everyone, since the environmental challenge we are undergoing, and its human roots, concern and affect us all.”