Narendra Modi: Yoga can help the fight against climate change 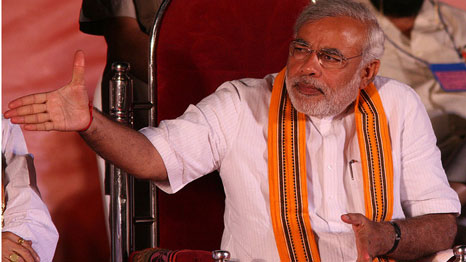 India’s prime minister says people will have to change their lifestyles and develop a harmony with nature if the world is to avoid dangerous levels of climate change.

In a speech at UNESCO headquarters in Paris, Narendra Modi said different paths to “economic wellbeing” should be explored by world leaders.

He recommended yoga as one way of fighting climate change, as it offered people a sense of “harmony with self, society and nature” and could create a “social consciousness”.

“In India faith and nature have had a deep meaning since ancient times – for us only path is a sustainable one,” he said.

Modi described climate change as a “pressing challenge”, but rejected calls for India to adopt tougher greenhouse gas emission cuts as part of a UN deal, which is set to be finalised in the French capital in December.

“Too often our discussion is reduced to arguing about emission cuts but we are more like to succeed if we offer afford solutions – not simply imposing choices,” he said.

The prime minister said India had already demonstrated its commitment to a clean energy future with its target for 175 gigawatts of renewables by the end of the decade.

India relies heavily on coal for electricity, but fears over climate change, air pollution and campaigns from local communities near coal mines have forced the government to consider other sources of energy.

Modi repeated his call for “global action” to develop cheap, clean and accessible clean energy for all, citing the high number of Indians – believed to be 300 million – without access to electricity.

Earlier this week the Indian government said it would increase the levels of compensation afforded to farmers hit by unseasonal rains in March this year.

Most north Indian states were hit by intense downpours and hailstorms, which in Uttar Pradesh damaged 50% of crops.