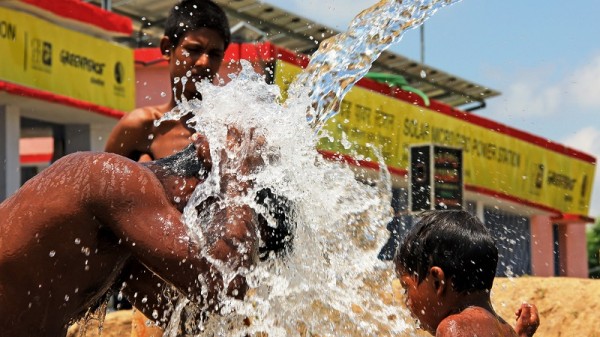 A scorching heat wave in India has killed more than 1,500 people in the past one-and-a-half weeks as temperatures soared above 47C.

India’s southern Andhra Pradesh and Telangana states are the worst-hit regions with more than 1,100 deaths, mainly caused by extreme dehydration and heat stroke.

The situation in northern India is not too different, with Kanpur, in Uttar Pradesh state, registering a record high temperature of 47C.

And despite the casualties, federal authorities still haven’t put in place precautions for the summer. The home ministry hasn’t even declared a heat wave a “national disaster”.

It is a taste of extreme weather conditions that are set to become more common as greenhouse gases heat up the planet, scientists say.

May and June are India’s hottest months, with temperatures regularly pushing above 40C. But meteorologists say the number of days when temperatures touched 45C has increased in the past 15 years.

A heat wave is declared when the temperature is 5C higher than the average temperature recorded on that particular day over the last three decades. Cities feel the brunt of the elevated temperatures, because of the magnified effect of paved surfaces and a lack of tree cover – known as the “urban heat island effect”.

“Compared to 2010, heat wave conditions in 2015 so far have been of a shorter duration, yet with a higher death toll,” he added.

“This could be due to the sudden change in temperatures after a prolonged wet February and March that had kept the temperatures cool.”

The Indian weather department has issued a red alert for the two worst-hit states and has forecast that the heat wave will continue.

“Continuous lack of thunderstorm activity for the last 10 days is also contributing to the increase in temperature over northwest and central India. Also, there is a heat transported from the western side,” said BP Yadav, director of the Indian Meteorological Department.

Last year was the hottest on record globally. In India, eight out of the 10 warmest years occured during the recent past decade (2001-2010), making it the warmest decade on record.

Climate researchers at CSE said more heat waves were expected as globally temperatures had risen by 0.8C in the past 100 years.

In New Delhi, the blazing heat is putting a heavy burden on power infrastructure, as those citizens who can afford it turn on the air con.

Demand for electricity is outstripping supply and causing power cuts across India, sometimes lasting for hours on end.

About two-thirds of India’s 1.2 billion people have access to electricity. This means that in India alone some 400 million people do not have reliable access to air-conditioning and refrigeration in intense summer.

The Delhi government says it has already halved the price of electricity and made water free, but that upgrading the related infrastructure is a long-term challenge.

“There are other long-term fundamental problems with the electricity and the water of Delhi that cannot be solved in three months’ time,” said a spokesperson for the Aam Aadmi Party-led Delhi government.

From pockets to states

Heat waves are projected to be more intense and occur more often with climate change. The impacts will be felt hard in India, due to the limited access to cooling.

“Southern India, currently not influenced by heat waves, is expected to be severely affected by the end of the twenty-first century. Projections indicate that a sizable part of India will experience heat stress conditions in the future… and increased mortality,” Indian researchers found.

In the whole of the country just one city in western India has taken preventative steps this time around.

After suffering a heat wave in 2010 which claimed 1,000 lives, local authorities in Ahmedabad did something unprecedented and have mapped out ‘high risk’ areas, including slums since 2013.

Though nationwide, only if the chronic hot bouts are classed as natural disasters more will more be protected, says CSE’s Srinidhi.

“If this gets listed as one as as a natural disaster, more concrete steps will be taken and the Ahmedabad action plan will be … taken to many other states and not just a few pockets,” he added.