Why love of landscapes is central to climate challenge

With land degradation soaring, climate strategists are looking beyond piecemeal projects to raise cash for conservation 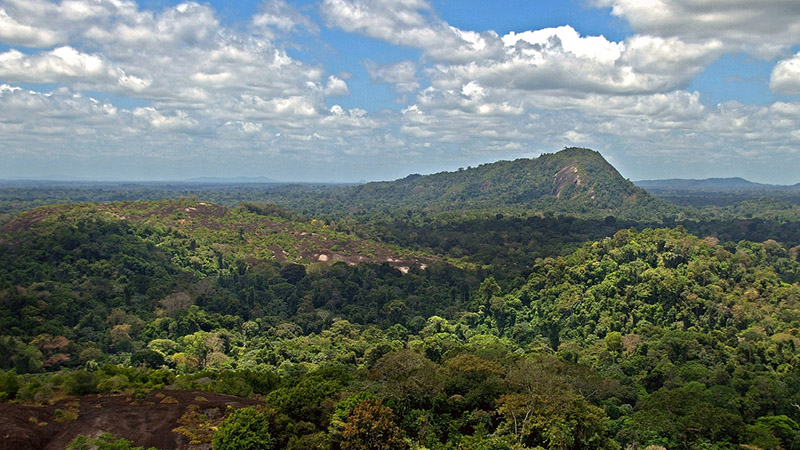 The Amazon rainforest from above (Pic: David Evers/Flickr)

“Love can save the world” is the sort of statement you expect to hear at 5am at the Glastonbury Festival stone circle, not from an ex-banker at a Royal Society event.

And his pitch to a grouping of financiers and climate experts last week wasn’t to hug each other, play Elbow’s One day like this on repeat or take mind-bending drugs.

Instead he wanted to promote “landscapes”, the latest buzzword deforestation campaigners and development banks are using to describe efforts to protect the natural environment.

They want communities, investors and governments to think big and move away from piecemeal efforts to save a patch of forest or restore a field.

And they hope it will unlock the millions needed to replant forests and regenerate agricultural lands scarred by years of neglect and abuse.

“There’s a reason why landscape is good. You can visualise a landscape,” Cameron says.

“You can look and imagine it changing. That’s critical. Thinking about a home makes you think about what is valuable.”

Landscapes are being hit like never before, say experts.

Over a quarter of the planet’s agricultural lands are now severely degraded, according to the Global Commission on Economy and Climate, a body chaired by ex-Mexico president Felipe Calderon.

Huge demand for commodities like beef, palm oil and soya is driving the agri-boom, which frequently ignores how ecosystems like forests regulate and store water and protect against soil erosion.

Deforestation and degradation of lands account for 11% of global greenhouse gas emissions, wiping out areas that previously acted as vast carbon stores.

Aside from climate considerations, agriculture accounts on average for 20% of GDP in developing countries, which rises to 34% in sub-Saharan Africa. Land degradation threatens that productivity.

And as the world population grows, so demand for food and areas to graze livestock are set to soar, placing further pressure on virgin forest.

Talking about landscapes moves away from what often seem like tree counting initiatives, epitomised by the UN-backed Reducing Emissions from Deforestation and Forest Degradation (REDD+) scheme.

“Landscapes allows us to talk about a whole bunch of issues in a more integrated way than say REDD did,” she says.

“When we’re talking about a landscape approach we’re actually talking about quite a complex set of relationships in respect of a particular place.”

“It’s emblematic of moving away from a project by project focus and doing things at scale.”

These efforts need millions of dollars to grow, more money than governments or civil society can provide, which is where supporters of the landscapes concept hope it will be a catalyst.

Peter Holmgren, director general of the Center for International Forestry Research (CIFOR) argues it “resonates” with the finance community, offering the potential for investments on scale.

The cash is there, David Pitt-Watson a financial advisor to the UN environment body and former fund manager tells the London event, but the opportunities are not presenting themselves or packaged in the right way.

“The problem is not so much a lack of money but where to invest it.”

It’s not a view everyone at landscape ground zero shares. Daniel Gad, a commercial farmer based in Ethiopia, says there are a huge number of “credible and bankable” projects, with a market of 250 million people in his region for basic agricultural products.

But banks are not recognising that potential, and farmers in Africa are often denied finance or offered cash at exorbitant rates, he says.

Many are heading towards cities seeking a better life, abandoning farms or leaving them in the hands of older generations who could often not maintain the lands.

Some investors still have a “phobia” against land investments, according to Abyd Karmali, head of climate finance at Bank of America Merrill Lynch.

Many were burned after the world’s carbon markets slumped and previous incarnations of REDD failed. He suggests an “interesting portfolio reallocation” towards greener products taking place across the world could see this change.

Also speaking at the event, Sean Kidney, head of the Climate Bonds initiative, predicts it would take three years to “lay the foundations” for a market around landscapes.

The world is “awash with capital” for the right projects, he adds.

That’s progress of sorts, but Cameron – who recently took a punt and invested in a farm in Tanzania – argues many in the financial world still don’t appreciate the true value of soil, water, trees.

For him it comes back to the language of landscapes and his holy trilogy of “love, reason and power” that are needed to raise awareness.

Finding language that allows the public and investors to make a rational connection between problems and how they could be affected is essential to enable change, he says.

“Too little of that has happened when we talk about degrees of warming… love of place is very important as much of the climate change debate requires us to think generationally.”