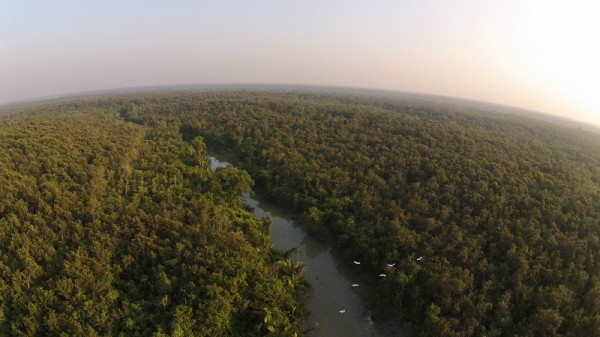 The Sundarbans are the world’s biggest mangrove forest, spanning the coastline of India and China (FicusMedia/Arati Kumar-Rao)

A proposed power plant at the fringes of Sundarbans forest is getting more attention than its supporters would like.

Indian prime minister Narendra Modi, during his visit to Bangladesh at the weekend, endorsed the controversial Rampal coal-fired power station. In a joint press statement with his Bangladeshi counterpart Sheikh Hasina in Dhaka, Modi said Rampal will have India’s support and cooperation.

But green groups say the project threatens the future of the world’s largest mangrove forest, a sensitive and diverse ecosystem. The Sundarbans are home to the critically endangered Bengal tiger and a Unesco World Heritage Site.

As the project clears environmental hurdles in Bangladesh, campaigners are turning their attention to financiers in a bid to starve it of cash.

The proposed 1,320MW plant is a joint venture by India’s state-owned National Thermal Power Corporation (NTPC) and Bangladesh’s Power Development Board (PDB). It is one of three major deals signed under the Bangladesh-India Friendship Power Company, formed in 2013 to deal with power trading between the two countries.

Together, the developers have acquired 1,834 acres of land and started to prepare the site, including land filling for construction of the plant and its associated infrastructure. The environment department of Bangladesh has approved its environment impact assessment report.

Campaigners are not satisfied. The rich wetland ecosystem of the Sundarbans provides habitat for an extraordinary range of biodiversity, including rare and threatened species and the almost-extinct Ganges and Irrawady river dolphins.

According to the India’s ministry of environment, forests and climate change, locations of thermal power plants are not allowed within 25 kilometres of the outer periphery of any ecologically sensitive area, forests or prime agriculture lands.

However, Bangladesh presently has no law or guideline that specifies minimum distance for a coal-based thermal power plant from reserve forests.

“The NTPC is flouting the rule of its own country. Once the power plant is set up, Rampal will be crowded by many industries and that would have an adverse impact on the sensitive ecology”, said Bangladeshi activist Mowdudur Rahman.

Experts point out that if the project works out, around 50,000 people would need to be evacuated from villages in the adjoining areas of Rampal. Environmentalists warn the power plant will release various harmful gaseous substances like carbon monoxide, oxides of nitrogen, sulphur dioxide, aldehydes, hydrocarbons and huge amount of fly-ash to the entire environment, seriously polluting water bodies of the entire area.

The impact starts with the coal transport. According to the EIA report, 13,000 tonnes of coal will be required for this power plant on daily basis. This coal is planned to be imported from Australia and Indonesia through Passur river in Sundarbans.

Light and sound from the coal-loaded vessels, as well as potential oil spills or water pollution, are set to pierce the tranquility of the Sundarbans’ main water source.

Then there is water demand from the power plant itself – some 9,150 cubic metres an hour when it starts running.

“If the coal power plant is installed, it will accelerate the extinction process of the fisheries,” warned Maha Mirza of campaign group the National Committee of Bangladesh. “The discharged water will be toxic and have a destructive effect on the fisheries.”

The project has been subject to ongoing criticism and protest within Bangladesh, leading to delays of several years. In September 2014, Bangladesh’s planning commission refused to approve the project.

Protests against the project culminated in a five-day march from Dhaka, the nation’s capital, to the project site in September 2013, with 20,000 participants demanding an immediate halt to the project. 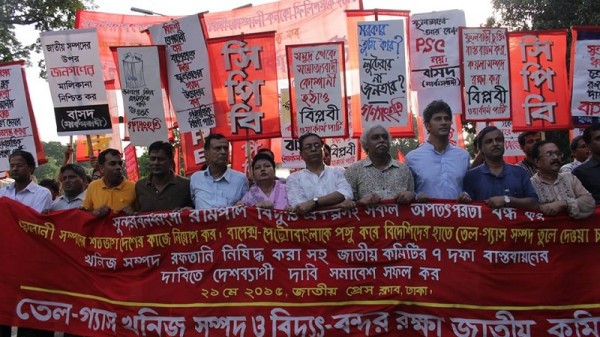 In May, many environmental groups in Bangladesh issued a statement calling on the project to be abandoned and requesting that “all financial institutions and potential equity investors make a clear public commitment to rule out any involvement in arranging or providing finance for the Rampal coal-fired power plant”.

Unesco has already expressed its concern about setting such type of power plant near the Sundarbans, identifying a “lack of transparency” on the Bangladeshi government’s part around the Rampal coal plant.

Rampal plant is expected to produce 750,000 tonnes of fly ash and 200,000 tonnes of bottom ash, to be contained in a 183-acre pond. Researchers at Transparency International Bangladesh say the EIA does not take seriously enough the risk of soil and groundwater pollution from this source.

Under condition of anonymity, an analyst tracking the project told RTCC in an email that the ash pond is being planned on the banks of the river, the worst possible place for leakage of toxic metals.

Other pollutants such as sulphur dioxide can stunt the growth of vegetation. The effects ripple through the food chain, from deer to the endangered Bengal tiger.

In December this year, Paris will hold the 21st United Nations climate change conference. Civil society groups are putting pressure on banks to end their support for coal industry, the largest emitter of carbon dioxide.

“There is an unacceptable risk that NTPC will contribute to severe environmental damage through the building and operation of the power plant at Rampal, including related transportation services”, the report said.

Risalat Khan, a campaigner with Avaaz, argued the plant was against Bangladesh’s national interest, because of its impact on relations with richer countries.

“The establishment of coal-fired thermal power plant will weaken Bangladesh’s demand for climate finance as a climate change vulnerable country,” he said.

Last month, Société Générale and Crédit Agricole ruled out the project at their annual general meetings held in France.

“Credit Agricole SA Group has no plans to finance the Rampal coal power plant, in Bangladesh, given our intervention rules and the risks associated with this project”, Stanislas Pottier, global head of sustainable development, said in an emailed statement.

This was followed by an email from Société Générale which said it is “not currently contemplating any financing related to the Khulna coal-fired power project, located in Rampal, Bangladesh”.

At the annual general meeting of BNP Paribas, climate groups like Friends of the Earth, BankTrack and activists from Bangladesh asked BNP Paribas to commit to not financing the Rampal coal-fired power plant.

“The billions of euros of support extended to the coal industry every year by BNP Paribas end up in projects that will pump out millions of tons of CO2 every year for decades, destroying pristine environments and threatening the survival of local populations,” said Yann Louvel, Climate and Energy coordinator for BankTrack.

“The Rampal project in Bangladesh, still only in the development stage, is one such case. It threatens the Unesco-protected Sundarbans, the world’s largest mangrove forest, as well as local communities, yet the project promoters are approaching even the big international banks for financing.”

It claims that the project in Rampal contravenes the Equator Principles, a voluntary agreement signed by 80 global financial institutions for assessing and managing environmental and social risk in project finance.

The United Communist League of Bangladesh, at a rally on World Environment Day, also demanded cancellation of the power project.