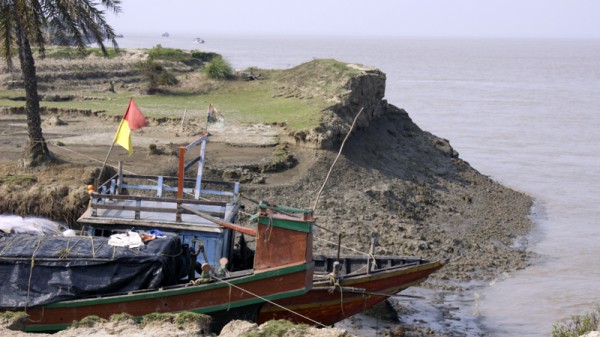 A boat anchored on the banks of Ghoramara Islands in India (Pic: Priyanka Singh)

By Sanjay Pandey in Ghoramara

The island of Ghoramara has shrunk by two thirds in the last four decades, eaten away by sea level rise and a river periodically swollen by erratic rainfall.

It is part of the Sundarbans region of India and Bangladesh, where some 13 million people eke out a living on the front line of climate change.

The World Bank warned in a recent report that sea level rise and population growth are putting the delta’s delicate ecosystems under increasing pressure.

For the islanders, there is a stark choice between gambling on favourable weather or migrating in search of a more stable existence.

Whenever the river rages into their homes, they retreat and rebuild deeper into the heart of the islands praying to God: “May this be the last ingression of the deity-turned-devil.”

In the past 10 years, Hasna Biwi has watched helplessly as the river swallowed her home, farm and cattle three times. “What can we do? Is it humanly possible to chase the raging river away? We have to live with it and die one day,” the 57-year-old told RTCC.

During monsoon season, inhabitants of islands like Ghoramara live in continual fear of a dam breach that would not only flood their homes and cattle, but also spoil standing crops. Saline water comes in, making the farms infertile.

Pointing to a standing cash crop of betel leaves, farmer Sheikh Rehman said: “If there is a breach this year too, the village will get flooded again, houses will be washed away or damaged and crops spoiled. We have taken a loan of around Rs 80,000 (US$1,300), again hoping against hope that there won’t any breaches this year.”

The family has considered moving to more solid land, but that takes resources it does not have.

“See, we are very poor people. We cannot afford to buy a plot in the mainland. Those who can they have already left. Only death can take us out of this place,” said Rehman’s mother, with tears in her eyes. When she came to Ghoramara in the early 1970s, she recalled, it had a police station and a post office. Now they are gone. 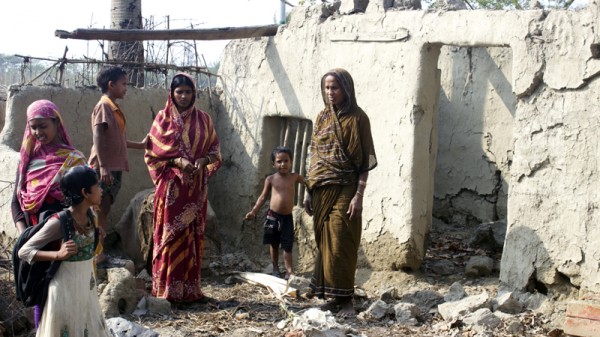 Hasna Biwi with her daughter-in-law and grandchildren at their abandoned house in Ghoramara (Pic: Priyanka Singh)

The story is the same for thousands of people living on the 100-odd islands of the archipelago. Located in the low-lying delta of mighty rivers, the islands have always grown and shrunk on a natural cycle as the water picks up and deposits masses of sediment.

But in recent decades, land losses have outweighted the gains. The Centre for Environmental Studies reports the Sundarbans has shrunk by around 250 square kilometres since the 1930s.

Some islands have vanished from the map altogether, like Lohachara, Suparibhanga and New Moon islands. With sea levels rising 5mm a year, more areas are expected to sink.

Spread over an area of 9,630 square kilometres in India and 16,370 sq km in Bangladesh, Sundarbans has the world’s largest mangrove forest. It hosts a Tiger Reserve and three wildlife sanctuaries.

It is also densely populated, with 1,000 people per square kilometre and a high birth rate.

At a time when the mangrove delta is being battered by cyclones and inundated due to sea-level rise, a team of nearly 50 scientists, led by coastal engineering expert Robert Nicholls from Southampton University, visited the Tiger camp in Indian Sundarbans early this month.

The objective was to find ways to secure water supplies, health and food for the millions living in the delta.

The scientist are trying to understand how to deal with a dynamic situation caused by climate change and human factors alike .

Once the five-year project is over, scientists say, they will be able to predict the different futures facing the delta under various scenarios.

It will be “crucial” not only to understanding the Sundarbans but also similar deltas in Egypt and Ghana that are home to some 500 million people in total, said Tuhin Ghosh, School of Oceanographic Studies joint director.

“Adaptation can be practised locally like changing the agriculture from high-yielding paddy to conventional and sustainable paddy farming using indigenous seeds. You can go for fishing, aqua-culture farm, crab fattening and so on,” said professor Sugata Hazra, director of the School of Oceanography Studies in Jadavpur University.

Another option is to migrate to a safer place, he added. “Migration should be seen in the framework of adaption rather than seeing it as the failure.”

That was the route taken by Suren Mandal, a climate refugee from Ghoramara who now lives in a slum area of Delhi. With the city state’s newly-elected Aam Aadmi Party promising to give every slum-dweller a pukka house, people like Mandal hope to become legal residents of Delhi.

Mandal, who inherited large tracts of land from his father only to see it being swallowed by the hungry tide, said: “I am now assured that nothing can take away the roof over my head.”

Ironically, the people who are suffering the most due to rising sea levels and increasing salinity, have little or no idea what climate change is.

Environmental activist Subhas Datta, who wants to launch a Green party in India, expressed surprise that no political party had made climate change an election issue in the region.

“For the common people, they don’t know about themselves – forget about climate change,” he said. “Ignorance is bliss for these hapless people.”