Oil major agrees at AGM to reveal its exposure to carbon risk, but presses ahead with controversial Arctic plans 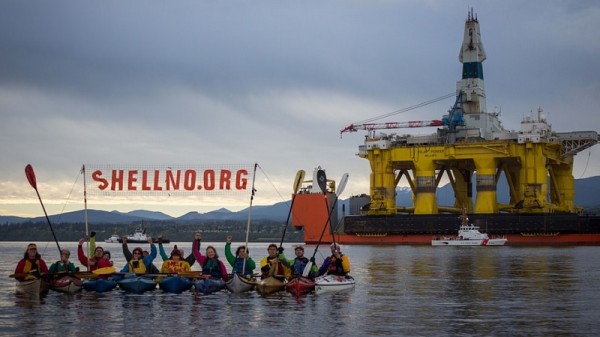 Shell today committed to reveal how its oil and gas assets will fare in a safer climate future, in response to a shareholder campaign.

Scientists estimate half of world gas reserves and a third of oil must stay in the ground to hold global warming to 2C. If burned, these fossil fuels would blow the carbon budget.

Shell’s controversial – and high cost – Arctic and tar sands ventures are among the most exposed to the risk of being “stranded” by climate action, analysts have warned.

Chief executive Ben van Beurden admitted the argument “sounds quite convincing” at the company’s AGM on Tuesday, under intense questioning by shareholder activists.

But he said: “That particular theory ignores the reality of our industry… It risks distracting from the real issues.”

With a growing population and billions rising out of poverty, Shell expects energy demand to double by 2050 and be mainly met by fossil fuels.

Even under “the most aggressive scenario”, it foresees alternative sources supplying only 35-40% of energy mid-century.

Halting investment in new oil supplies would lead to a shortfall of 80 million barrels a day by 2050, van Beurden claimed.

In 2014, Shell supplied 2% of global oil demand and 3% of gas. It is set to merge with BG Group this year, expanding its market share.

It has two future scenarios, which Shell climate advisor David Hone told RTCC are consistent with 2.5-3C of warming.

Others have noted the forecasts are based on an International Energy Agency scenario linked to 4C warming and sea level rise of 52-98cm.

Shareholders voted 99% in favour of a resolution proposed by the “Aiming for A” coalition of investors, at a meeting lasting nearly five hours.

The resolution forces the company to consider the possibility of a 2C world – the internationally agreed goal for efforts to curb greenhouse gas emissions.

It follows the adoption of similar measures by BP last month.

Shell showed no signs of halting its ill-fated Arctic exploration plans, which analysts say are incompatible with the 2C goal.

Paul Ekins, expert in “unburnable carbon” at UCL, has said: “From an economic point of view, it would be unwise to extract the oil from the Arctic…

“It would mean less expensive oil elsewhere was left unused.”

He reaffirmed plans to start drilling in the Chukchi Sea this summer, subject to permits and overcoming legal challenges. Last week’s green light from the US Department of the Interior was “very encouraging”.

Louise Rouse, a consultant to Greenpeace on the Arctic attending the AGM, begged to differ.

On the contrary, she told RTCC, its insistence on the project “reveals a huge gap in logic in Shell’s thinking”.

The Arctic rigs will not start full production until the 2020s and depend on high oil demand and a high oil price, she said. If that happens, “we are very likely to have missed our climate goal”.