University will phase out £1.5 million holdings in oil and gas equities within three years, to highlight climate threat 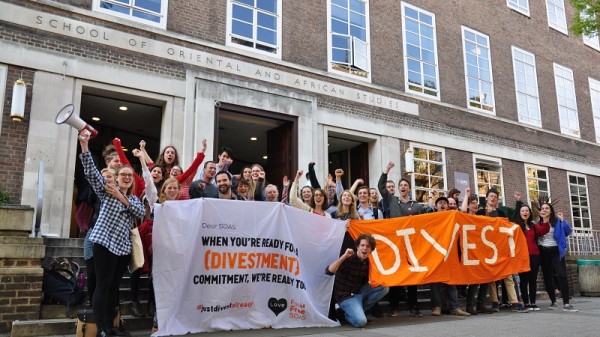 SOAS will be the first London university to divest from all fossil fuel holdings, its governing body announced on Friday.

The institution has pledged to withdraw its £1.5 million stake in oil and gas companies within the next three years.

It joins a growing movement that aims to stigmatise companies which profit from climate-polluting activities.

Paul Webley, professor and director of SOAS, said the move was in line with the university’s commitment to environmental sustainability and he hoped others would follow suit.

“As the harmful social and environmental impacts of climate change becoming increasingly clear, these initiatives ensure that SOAS is doing all it can to show leadership on this issue,” he said.

SOAS specialises in studies relating to Africa, Asia and the Middle East.

Rosaleen Duffy, a professor focused on climate impacts in Africa, said: “Climate change will deepen global inequalities, as the richest produce the greatest share of emissions while the poorest have to cope with its greatest burdens.

“Africa in particular will be hit the hardest, with severe impacts on food security and poverty. Public institutions like SOAS have a moral duty to put a stop to this and push for a transition to renewables.”

Divestment campaigners aim to highlight the dangers of continued reliance on fossil fuels for energy, which release greenhouse gases when burned and raise global temperatures.

Scientists estimate more than 80% of coal, half of gas and a third of oil reserves must stay in the ground to avoid the worst effects of climate change.

Yet energy companies continue to base their business plans on projections of future fuel demand that are inconsistent with a safe planet.

Andrew Taylor, campaigns manager at People & Planet, which supports university divestment campaigns across the UK, added: “If you are interested in studying environmental or social justice issues at a university that definitely won’t be investing your fees in wrecking the climate, then SOAS must now be one of the top places to do it. Universities that continue to say no to divestment are eroding their legitimacy to teach about sustainability.”