BP forecasts a 37% rise in energy demand by 2035, blowing the emissions budget consistent with a 2C world

BP challenged governments to match their climate goals with effective policies at the launch of its energy outlook on Tuesday.

Without further policies, the oil major foresees global energy demand rising 37% by 2035, with two thirds of that coming from fossil fuels.

That would push up emissions to almost twice the level recommended by scientists to limit temperature rise to 2C above pre-industrial levels – the goal agreed by governments in 2010.

Bob Dudley, group chief executive, said BP needed to “be responsive to a carbon constrained world” but played down its ability to lead change.

“It is not for us to lead, it is for us to do our job and respond to the incentives and structures provided by policymakers,” added chief economist Spencer Dale. “We can say to the policymakers: We think your policies are inconsistent with what you are trying to do.”

Policymakers need to put a “meaningful” price on carbon to drive emissions cuts, the company argued.

The International Energy Agency (IEA) has modeled a future energy mix compatible with the 2C goal. That assumes a carbon price of US$100 a tonne across the developed world by 2030.

In the world’s largest carbon market today, the European Union emissions trading system, the price is less than a tenth of that.

Based on its interpretation of the state of government policy, BP only sees the price rising to US$40/t by 2035. Accordingly, its carbon dioxide emission projection is 18 billion tonnes higher than the IEA’s in 2035. 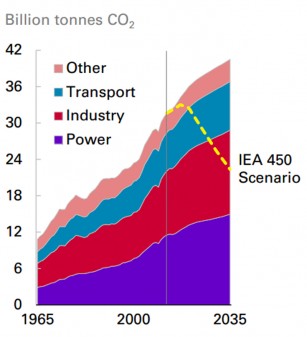 In turn, BP is under pressure from shareholders to consider the possibility governments will follow through on their climate promises.

Scientists estimate a third of oil and half of known gas reserves need to stay in the ground to meet the 2C goal. That could dent profits for fossil fuel companies and strand high cost projects like BP’s “Sunrise” tar sands venture.

Dale admitted he had “not seen a detailed analysis” of what a 2C path would mean for BP’s business.

BP this month backed a shareholder resolution that would force it to analyse more deeply the risks climate action poses to its business plan.