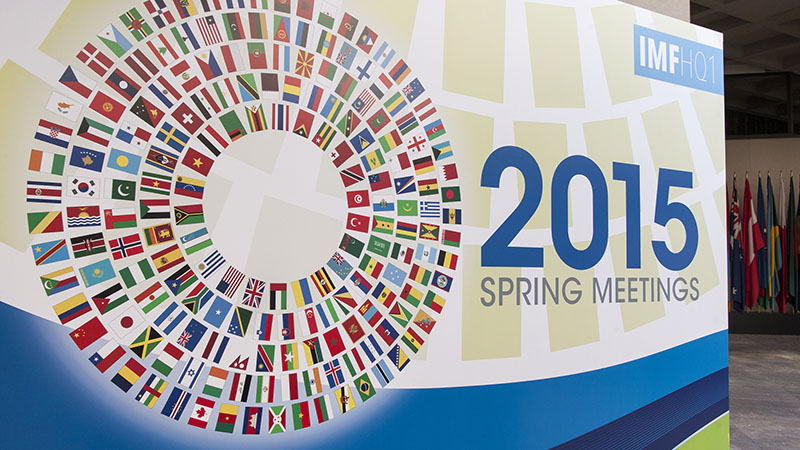 Finance ministers and central bankers are becoming increasingly concerned over how the world will fund an “orderly transition” to green and climate resilient growth, a senior World Bank official has told RTCC.

Rachel Kyte, vice president at the Bank and its climate change envoy, said discussions over carbon pricing, clean energy investment and the need to stop burning fossil fuels were “more and more front of mind” for governments.

“This year what you are starting to see is a mainstreaming of the debate,” she said, ahead of the annual International Monetary Fund spring meeting in in Washington DC.

Food security, the collapse in oil prices and the need to sustain economic growth will all headline this year’s event, but it will also include a strong focus on climate change, ahead of a proposed UN pact, set to be finalised in Paris later this year.

“We will have a ministerial discussion with more ministers than we have ever had before – including the G7,” Kyte said. She hopes delegates will “roll up their sleeves” and “get cracking”.

Earlier this week World Bank chief Jim Kim spoke of poor and emerging economies feeling the “boot of climate change on their neck”.

A UN-backed panel of scientists say that the world could warm by up to 4C above pre industrial temperatures by 2100 if emissions continue to soar, leading to more droughts, floods and rising sea levels.

The Bank has led calls for tougher carbon pricing and an end to fossil fuel subsidies as two key policies to address rising levels of greenhouse gas emissions.

A 2013 study by the OECD arrived at similar figures, finding that up to $90 billion a year is being directed towards fossil fuel production or subsidising its use.

Kim has called for these to be “removed right now”, pointing to data suggesting the richest 20% benefit up to six times from these funds than the poorest 20%.

Jordan, Indonesia and Malaysia all started to cut subsidies in the last 12 months, while Morocco and Egypt have received praise for their efforts to discourage wasteful energy use.

Kyte said the cash set aside for subsidies could be used by developed countries to meet their 2010 promise to deliver $100 billion a year of climate finance to the world’s poorest by 2020.

“You can see that if fossil fuel subsidies were removed in countries who are expected to contribute to that US$ 100 billion and if part of proceeds of subsidy reform was earmarked as climate finance then that’s a contribution,” she said.

“If some who need to contribute were to put carbon pricing in place with it being at a robust level and some proceeds were allocated as climate finance then that would [also] be a contribution.”

Progress on these fronts, linked to a $38 billion market for green bonds and the newly-launched Green Climate Fund could offer a landing ground for a strong climate finance package in Paris, said Kyte.

Without more funding for clean energy projects developing countries say they cannot commit to further carbon cuts, a point many are likely to highlight in their submissions to the UN later this year, known as Intended Nationally Determined Contributions (INDCs).

“There are signs and signals that things are changing. That’s one reason why people are keen to see the INDCs from these key countries,” said Kyte.

“We know from conversations with clients and counterparts that they are thinking through the challenges of changing trajectory.”

Fast growing cities in China, India and Brazil are likely to test the green credentials of governments and investors in the next two decades.

According to the New Climate Economy report, in next 15 years energy demand will grow between 20-35%, requiring $45 trillion of investment.

Otherwise countries face “building things which are exacerbating or perpetuating a lack of resilience”, she said.

Analysis by the UN’s climate science panel suggests that the likely costs of just 2C of global warming could cost up to 0.5–2% of global GDP by 2050.

“What we think is important is we need to continue to build the case and strengthen the evidence for the fact that any delay in financing a cleaner growth path is going to cost more in long run,” she added.