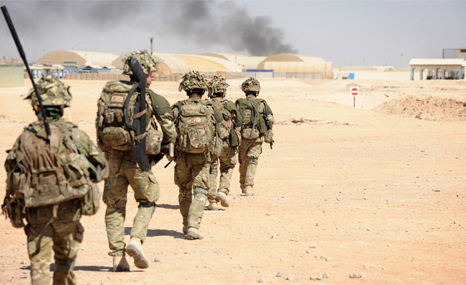 NATO plans to test the latest clean energy technologies in a war game due to be held in Hungary this coming June.

The military alliance’s website says over 1000 soldiers will take part in the exercise, which will use the latest self-contained wind and solar power cells.

“Now is the time to start thinking about multinational cooperation: by setting clear priorities; by bringing together groups of interested nations; and by achieving economies of scale,” he said.

The potential for renewables to replace fossil fuels in a war zone was highlighted during the recent conflicts in Iraq and Afghanistan, where NATO relied heavily on fuel to be transported by road to outlying bases.

These were frequently attacked and ambushed by insurgents, leading to an estimated 3000 dead or wounded US soldiers between 2003 and 2007.

Military forces are significant energy users. Together US army, navy and airforce are the country’s largest consumers of oil.

The Pentagon has committed to investing in solar, with a 1 gigawatt target for 2025. In 2012 it started trials of biofuels in part of the US fleet, in what was dubbed the ‘Great Green Fleet’

Katherine Hammack, United States Assistant Secretary of the Army and one of the observers at that event, said cutting energy use was “operationally necessary” for the future of the military.

“It’s fiscally prudent, and it’s mission essential for us to make sure that we have energy security and can perform our primary mission,” she said.