The NATO summit concluded with recognition of climate as a security threat, and committed to a more energy efficient military 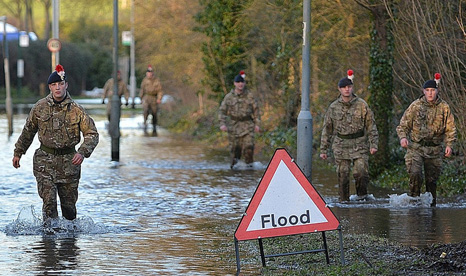 NATO has continued to acknowledge that climate change poses a security threat to its 28 member states, but has offered no significant revisions to its previous statements on the topic.

“Key environmental and resource constraints, including health risks, climate change, water scarcity, and increasing energy needs will further shape the future security environment in areas of concern to NATO and have the potential to significantly affect NATO planning and operations,” reads the only mention of climate change.

It is exactly the same as the paragraph which appeared in NATO’s last communique, released in 2012 at the Chicago Summit.

While NATO recognised climate change as an emerging security concept in 2010, it fell by the wayside at the Newport summit as world leaders faced the urgent military threats of Russia, Afghanistan and ISIS.

Jamie Shea, deputy assistant secretary general for emerging security threats at NATO, said that its inclusion in the Communique sent a good signal for more significant consideration of the topic in the future, and that it “implies the need for NATO to keep this under close monitoring.”

He said: “It’s there and I know that sometimes in the NGO community people may not be very impressed by that, but it’s important for us because it gives us a so-called hook that we can use to put these issues more into the agenda.”

The Communique also built on NATO’s previous commitments towards energy security, saying that the organisations would “continue to work towards significantly improving the energy efficiency of our military forces.”

The EU in particular has focused on the security benefits that energy efficiency and home grown renewable energy resources can bring—a connection that has been thrust on to the agenda by political tensions with Russia, which controls around a third of EU gas supplies.

The communique instructed the North Atlantic Council to produce a progress report on energy security by the next summit, which will take place in Poland in 2016.