One hundred and five years ago the US Navy was flexing its muscles by sending the 16 ships of what would become known as The Great White Fleet to tour the world. Its goal was to inspire fear and admiration in equal measure.

In 2016, The Great Green Fleet aims to do the same, only powered entirely by alternative energy sources. It moves a step closer to reality this week as the enormous biennial RIMPAC naval exercise gets underway off the coast of Hawaii.

The US Department of Defense is the largest single user of fossil fuels. The Navy alone is hit with a $20million bill for every $1 increase in the price of oil.

Despite widespread scepticism on climate change in the US, the Pentagon has led the way on biofuels research as it looks to secure its energy supply and wean itself off fossil fuels.  Secretary of the Navy, and former Mississippi Governor and Ambassador to oil-rich Saudi Arabia, Ray Mabus says this is not an option.

“We can’t afford not to do this. First, our dependence on foreign sources of fossil fuel is rife with danger for our nation and it would be irresponsible to continue it. Second, paying for spikes in oil prices means we may have less money to spend on readiness, which includes procurement. We could be using that money for more hardware and more platforms,” said Secretary of the Navy Ray Mabus.

The Great Green Fleet will be an alternative energy-powered Carrier Strike Group featuring a nuclear-powered attack submarine and aircraft carrier as well as destroyer and cruiser class missile ships and numerous support and supply vessels, powered by biofuels.

The biggest headline grabber during this new green fleet’s trials during RIMPAC is the use of 900,000 gallons of a 50:50 biofuel blend.

The mix was transferred to the USS Nimitz at sea during the exercise.

“Department of Navy investments in biofuel will encourage a competitively priced, and domestically produced, alternative to conventional fuel,” said Tom Hicks Deputy Assistant Secretary of the Navy for Energy.

“The prices for biofuel have already dropped dramatically since we first began purchasing it for testing,” said Hicks. “Such investments help the Navy and the nation become less dependent on foreign oil, and thus less subject to volatility in oil prices that directly affect our readiness.”

Consumer gasoline prices in the US are currently hovering around the $3 mark.

The biofuels are made from used cooking oil and algae rather than competing with land-based food crops, boosting their sustainability. 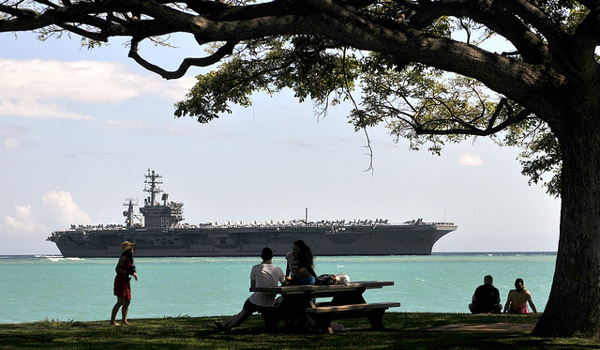 The aircraft carrier USS Nimitz will operate with a 50:50 blend of biofuel during the RIMPAC exercise off the coast of Hawaii. (Source: Flickr/US Pacific Fleet)

The fleet will also be using an energy efficiency dashboard to help personnel monitor and adapt usage.

Incandescent and fluorescent bulbs have been replaced, ship’s hulls have been streamlined to reduce drag and engine modifications have improved efficiency.

There are currently moves afoot in Washington to prevent the Pentagon from investing in biofuels until they compete on price with conventional fuels.

The Navy says it won’t buy any unconventional fuels for operational use until that happens. The massive bulk purchases they are making now meanwhile, are helping to bring down costs for everyone.

Should those wishing to shutdown biofuel use by the US armed forces be successful, it could sink development of the technology for the foreseeable future.