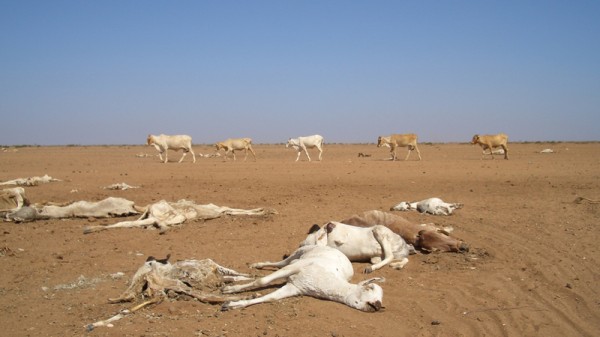 Climate change is already raising the risk of drought, hitting food sources in parts of the world
(Pic: Flickr/Oxfam International)

Governments have committed to limit temperature rise to 2C above pre-industrial levels, a goal that requires steep cuts in greenhouse gas emissions.

But a meeting of scientific experts and negotiators at last December’s UN climate talks in Lima concluded that was unsafe for much of the world’s population.

That was revealed by Petra Tschakert, a coordinating lead author of the Intergovernmental Panel on Climate Change’s latest assessment of climate change impacts, in the journal BioMed Central.

Richer countries with high emissions on the whole support the 2C goal, Tschakert noted. Yet alliances representing more than 100 small island states, poor and middle-income countries want to see it lowered to 1.5C.

The world has already warmed by 0.8C and is on course for an estimated 2.9-3.1C of temperature rise under the latest climate action pledges.

The global average temperature goal does not take into account the regional impacts of climate change, Tschakert argued.

Low-lying islands, high mountains and the tropics are particularly vulnerable to flooding, drought and heatwaves.

And the World Health Organization told delegates in Lima there was no “safe limit” for health. Climate change is already leading to more undernutrition, food and water-borne infections and heatwave deaths.

Tschakert said: “Using a figure for average global warming may indeed be the most convenient and compelling means to discuss the severity of climate change impacts.

“But not only does it inadequately capture the complexity of the climate system, it poorly reflects locally experienced temperature increases and the extreme and large variation across regions – no single person or any species faces a global average.”

As for ecosystems, the experts said limiting warming to 1.5C would save half of the world’s corals and leave some Arctic summer ice intact.

Tschakert called for “a commitment to protect the most vulnerable,” to happen now, “not only when climate change hits the rich world”.

The UN is due to report in June on a review of the 2C goal.