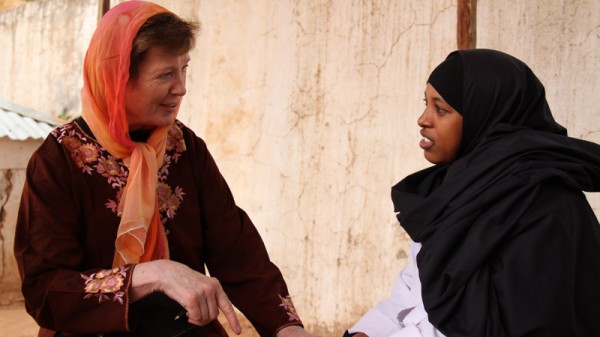 Mary Robinson on a visit to Somalia in 2011 (Pic: Flickr/Jennifer O’Gorman)

When she was UN high commissioner for human rights (1997-2002), Mary Robinson admits, climate change was “not at the forefront” of her mind.

It was not until later, visiting African countries under her Ethical Globalization Initiative and as honorary president of Oxfam, the link became apparent.

People would tell her about the rainy seasons not coming on time and the impact that had on their livelihoods.

“When I read up the science, I really was faced with something that was so much more urgent and significant than even the everyday human rights crises I was dealing with as commissioner,” she tells RTCC.

Now, as a special envoy on climate change for UN secretary-general Ban Ki-moon, she deals with people steeped in science and environmental concern but less aware of human rights.

With the Mary Robinson Foundation, she aims to bring the two together under the banner of “climate justice”.

And she helped to broker last month’s Geneva Pledge, signed by 19 countries, to bring human rights into the global climate deal due this December in Paris.

Led by Costa Rica, the pledge is backed by Latin American, European and small island developing states, Uganda and the Philippines.

“We cannot overlook the injustice faced by the poorest and most vulnerable people who are disproportionately affected by the impacts of climate change,” it reads.

“In a transition to a low carbon economy we want to ensure that no one is left behind.”

That means prioritising access to clean energy for the 1.3 billion people worldwide who have no electricity and the 2.7 billion dependent on dirty stoves for cooking.

“For poor countries, the most important thing is development, but development does not have to be linked to fossil fuels,” says Robinson.

She hopes solar panels can do for energy what mobile phones have done for communications across Africa – “leapfrog” the giant, centralised (and in this case dirty) infrastructure phase of development.

Human rights and climate action do not always rub along smoothly. Some major hydropower and forest carbon projects, for example, bring big emissions savings, but come into conflict with indigenous claims on the land.

Robinson does not recognise a trade-off: “Having a good sense of respecting human rights is much better for good and effective climate policy. Mistakes are made if you don’t have regard to human rights in climate action.

“If you get into corn ethanol and drive up food prices, that is a bad policy.”

Nor does she accept that the climate justice argument, which implicitly puts the onus on developed countries to act, provides cover for emerging economies like China to resist greenhouse gas emission cuts.

“If you come to the issues from a perspective of equity and justice, the impacts of climate are on the poorest countries,” she says.

While the developed world generated most historic emissions, emerging economies have a “major responsibility now”.

As for the suggestion that human rights risks overloading an already politically fraught deal, she says that Paris will set the framework for decades to come.

“I believe that as time goes on, we will increasingly be aware of the immediate and long term negative impacts on human rights.”

Analysis: From Kalimantan to Lima, where do women stand in climate?

Robinson, who as president of Ireland advocated for access to contraception – a controversial issue in the deeply Catholic country – is also adamant the Paris deal must speak up for women.

“Climate change does have very strong impacts on the ground, particularly in African and South Asian contexts.

“If you undermine livelihoods because of drought and flooding, who picks up the pieces? Who walks further to find water that isn’t contaminated?

“Because of the differential roles, it has a very strong gender impact. We need to promote gender equality in the climate context just as we need to promote it in the sustainable development context.”

Saudi Arabia has resisted such language, she notes, but it is already embedded in the sustainable development goals to be agreed in September. “They need to think it through.”

Robinson’s five grandchildren will be in their forties in 2050, a long range milestone for many climate plans.

She hopes Paris can set emissions on a path so they have “a reasonable world, that will be more affected than our world but will be liveable”.