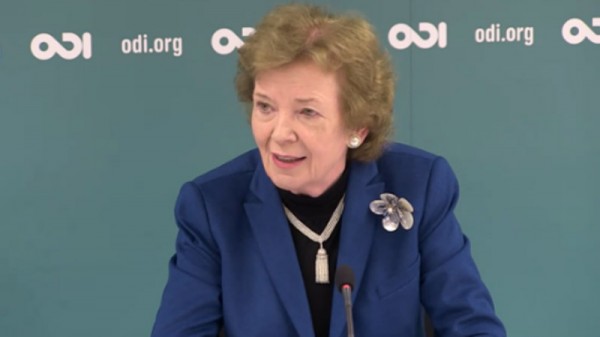 Ban Ki-moon’s special envoy on climate change voiced support for the fossil fuel divestment movement at an event in London on Friday.

Mary Robinson, leading climate justice campaigner and former president of Ireland, said it was “very interesting” to see the movement grow in impact.

For any fund, “it is almost a due diligence requirement” to consider ending investment in dirty energy companies, she said.

“Corporations need to look at what contribution we are making to hurting those who are in the front line of being most vulnerable to climate change.”

They aim to stigmatise those who stand to profit from perpetuating the use of climate polluting energy sources.

Robinson was speaking at an event hosted by the Overseas Development Institute on the role of cities and business in tackling climate change.

She emphasised the need to make sure action on climate change goes hand in hand with eliminating poverty and upholding human rights.

When Eleanor Roosevelt drew up the Universal Declaration of Human Rights in 1948, Robinson said, “she never imagined human activity would potentially cause countries to go out of existence”.

Coming back to the divestment question, she added: “If you respect human rights, don’t invest in what damages human rights.”