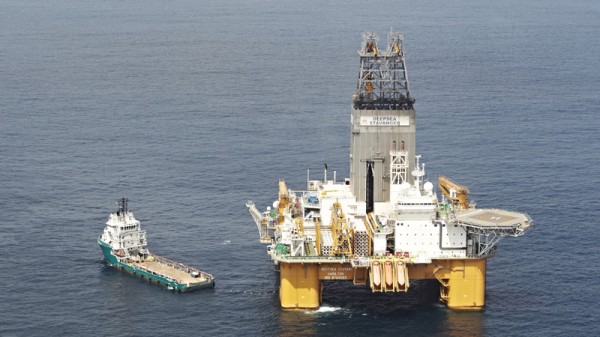 Deepsea oil drilling is one of BP’s priorities for investment (Pic: BP)

BP will advise shareholders to back a resolution on climate change at April’s annual general meeting.

The resolution, similar to one endorsed by Shell last week, will force the company to reveal the risks climate action poses to its business plan.

That is likely to heighten scrutiny on high cost projects like its “Sunrise” venture in Canada’s tar sands. Analysts say these could struggle to turn a profit as governments act to curb greenhouse gas emissions from fossil fuels.

Explaining the board’s reasons for accepting the resolution, a BP spokesperson said they saw it as “non-confrontational”.

“It also gives us the opportunity to demonstrate BP’s current actions in the area and build on its existing disclosures in the area,” he added.

BP’s portfolio “compares favourably with other oil and gas majors” when it comes to climate risk, according to the shareholder activists who tabled the resolution.

Yet with the international community aiming to limit global temperature rise to 2C above pre-industrial levels, scientists estimate a third of oil reserves and half of gas reserves are “unburnable”.

That will curb demand for fossil fuels, meaning high cost ventures in the Arctic, deepwater and tar sands may not be viable.

The Church of England, one of more than 150 investors to put forward the resolution, welcomed BP’s decision.

Edward Mason, head of responsible investment for the Church Commissioners, said: “The positive way in which BP and Shell have responded to our shareholder resolutions is completely unprecedented.

“This represents a step change in engagement between institutional shareholders and the oil and gas industry on the strategic challenge that climate change poses to the industry.”

Elspeth Owens, barrister for ClientEarth, said: “It’s great news that BP has today recommended its shareholders support the climate risk resolution. This confirms the potential of shareholder engagement and demonstrates that BP is listening to some of its biggest investors.”