Country’s emissions have soared in past two decades, but government believes cuts can boost competitiveness 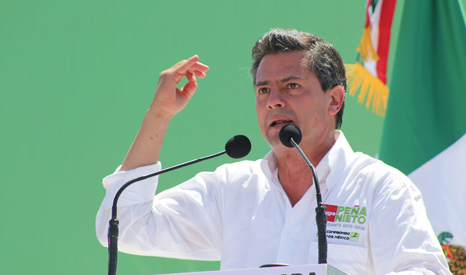 Mexico City’s traffic jams are the stuff of legend.

Some commuters leave for work at 530am just to be at their desks by 8, racing along the Anillo Periférico before it slows to a crawl.

By mid-morning the city’s huge highways are choked by cars, lorries and shiny SUVs, leading its long suffering residents to brand the congestion the world’s worst in a 2011 survey.

The traffic contributes to the grey-brownish pall of smog that frequently covers the city, blocking out the mountain views for the 21 million inhabitants.

If pollution levels remain high for two days, the “Hoy No Circula” (“No Driving Today”) program automatically comes online, restricting cars based on their number plates. 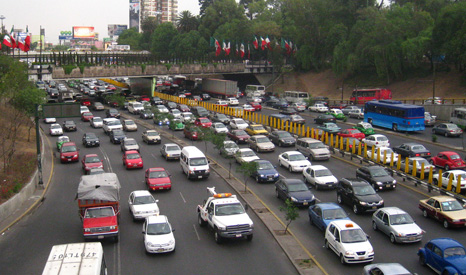 But the locals, frustrated at weak government initiatives to address air pollution, would be surprised that internationally, Mexico has a growing reputation for climate-friendly policymaking.

In 2012 the government passed one of the world’s toughest climate laws, with a requirement to reduce emissions of carbon dioxide by 30% below business-as-usual levels by 2020, and by 50% below 2000 levels by 2050.

Last month the energy department announced a new 33% renewables target for 2018, hugely ambitious given the current level is 14%.

It was a move that means Mexico is often used as a case-study by diplomats and UN officials explaining how developing countries can contribute towards greenhouse gas cuts.

That is the theory.

In practice decarbonising the Mexican economy is a huge challenge. The country’s last submission to the UN in 2012 revealed emissions have soared 33.4% since 1990, growing 1.5% a year.

Transport and electricity are the main sources of carbon pollution, followed by agriculture and deforestation.

Climate change was not something President Pena Nieto shouted about when he took office in 2012, talking frequently about poverty, jobs and addressing the brutal war on drugs.

He has won praise since from the World Bank for overdue structural reforms in education, telecommunication, fiscal policy and notably energy.

Many analysts thought Nieto would either water down or scrap Mexico’s flagship climate law, passed months before he came to power, but he now appears to believe it is necessary.

What is especially interesting is that it was during a bleak economic outlook in 2013, Nieto started to make the case for a new form of green growth.

“The great promise of a better future for humanity; it is the ability to grow and create wealth without damaging our environment or our natural heritage,” he told an audience in the capital in June that year.

“It is essential that we adopt the Inclusive Green Growth paradigm.”

The future now looks a little brighter, with figures for April 2014 showing a 1.3% growth rate, the highest monthly figure since 2012.

Nieto is not alone in appearing to believe that green growth based on energy efficiency and better resource use could offer the country a competitive advantage.

“The traditional trade-off that a lot of people talk about between growth and responsibility to the environment is a false dilemma.”

Calderon, previously a chairman of state oil company Petroleos Mexicanos, is currently working on a report exploring the economic benefits of climate friendly policymaking, due out in September.

The Global Commission on the Economy and Climate will present 10 recommendations to world leaders at UN chief Ban Ki-moon’s climate summit in New York.

Some of the proposals, such as cutting fossil fuel subsidies, investing in efficiency, building better urban transport links and boosting renewables are already being rolled out in his home country as part of the new climate legislation.

According to the US Energy Informational Administration, Mexico is poised to become one of the world’s fastest-growing wind energy producers, with over 1.2 gigawatts in the pipeline.

“One key reason for this encouraging move towards political consensus is that many legislators increasingly recognise the positive co-benefits of climate change legislation,” said Alejandro Encinas, a Senator from the PRD centre left party.

“These range from greater resource efficiency and increased energy security to the reduction of air pollution. All this, in turn, mirrors a crucial shift in the political debate on climate change.”

Few believe a green revolution will occur overnight. According to the World Bank, 52% of Mexico’s 120 million citizens live on the poverty line, while the drugs war is a constant drain on resources.

Coal consumption by the power industry has also risen in recent years, as has natural gas, driven by a 25% surge in demand over the last decade.

As a leading emerging economy, significant steps to reduce the use of fossil fuels are likely to be watched closely by countries in similar circumstances, such as China, India, Brazil and South Africa. 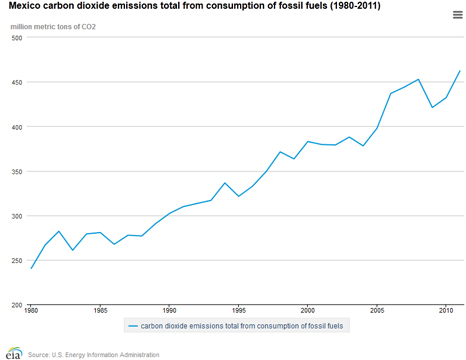 One vital step could be the forthcoming energy reforms, and the ending of the 76-year monopoly of hydrocarbon giant PEMEX, the world’s largest shallow-water oil producer.

According to a government document outling its plans, the promotion of green energy will be a key plank in its future strategy.

“The State will promote the environmental protection through sustainability criteria, establishing obligations for participants in the electric power industry to generate with clean energies and reduce polluting emissions,” it says.

Congress still has to approve the reforms, but supporters are optimistic.

Senator Aarón Irízar, a senior member of Nieto’s PRI party, told RTCC the government’s 2013 liberalization of the energy sector and the national oil firm could be one of its major green achievements.

“PEMEX will be made one of the cornerstones in the fight against climate change, using a strategy that develops renewable energy and saves energy,” he said.

An equally tough problem is the subsidised fuel prices consumers have enjoyed for decades, highlighted in a 2013 report by the Organisation for Economic Co-operation and Development (OECD).

Subsidies in the 34 OECD countries amounted to $55-90 billion between 2005-2011, and Irízar admits they are deeply entrenched in the Mexican psyche.

“Although it is a complex decision, and will take many years, I do believe that is politically possible to address the subsidies that the state has been covering several years,” he said.

“The policy of subsidy is unsustainable from an economic point of view.”

Cutting support for oil and gas producers is essential for the country’s long-term prosperity, according to Fernando Olea, head of the UK-based Carbon Trust’s operations in Mexico.

He’s running a new initiative aimed at reducing the energy costs of 150,000 small and medium sized businesses, working closely with the energy ministry.

“Mexico has been living with energy subsidies for as long as anyone can remember. People don’t realise the cost of power. There has been no effort to take control of this,” he said.

Olea says there are concerns that as subsidies disappear, businesses that have never factored in electricity costs could struggle, or go under.

“Focusing on competitiveness will be our main selling point. Mexican traditional industries have suffered from Chinese imports for the past 20 years…very much so for the past 8-10 years,” he said.

“They cannot sell a cheaper shoe or other goods coming in from China even with very steep Chinese import taxes…they realise they have to cut their costs.”

Cooling, heating and lighting are three of the main targets in the Carbon Trust initiative, which aims to deliver $1 billion in reduced energy costs and cut carbon emissions by over 6 million tonnes.

What makes Mexico’s green drive curious is the apparent lack of enthusiasm for any of its climate laws among the general public.

As a result, the urgent need to boost productivity and efficiency appears to be at the core of the government’s messaging, with positive side-effects for the environment.

“As such, there is no public support for decarbonising the country,” said Irízar, saying a focus on the jobs green policies can bring is more effective.

For Nieto, the real interest in green policies is a need to protect resources and natural elements that are “fundamental to human survival,” he said.

It’s a notion his fellow Senator Encinas backed up, pointing to the positive narrative Mexico’s government has tried to place on its climate laws.

“Until now, it has been largely framed by the narrative of sharing a global burden – with governments, naturally, trying to minimise their share,” he said.

But it points to a rapid rise in the 2013 INSEAD Global Innovation Index, and praises the energy reforms, which it says “open up possibilities” for new technologies to be deployed.

“Recently approved cleantech-friendly government policies and R&D budget have yet to improve access to private finance or increase local cleantech investors’ start-ups in the country,” it says.

As a result of Nieto’s business-friendly climate approach, he is likely to be greeted warmly by fellow leaders at Ban Ki-moon’s New York summit this September.

Mexico City was chosen as the home for the 2014 GLOBE World Summit of Climate Legislators, and the country’s diplomats now speak from a position of authority at the UN climate negotiations.

For Olea, who said he was “amazed” at the “boldness” of the 33% renewables target, the best is yet to come, although he has some warnings for investors.

“I think Mexico is pretty enthusiastic and happy to change in some ways. But if you want to tell people how to do their own tortillas you won’t get anywhere,” he said.

“The big challenge here is current capabilities. The Mexican traditional sector is undereducated and composed of working families or extended families, that keep inheriting the families for some many years they grow into it.

“It’s not that they don’t want to change, but it’s hard to think differently when you’ve been thinking the same way for generations.”