Polluting the planet is a betrayal of God, says Pope Francis

The Pope called on young Filipinos to take care of the planet, after visiting Haiyan-struck town of Tacloban 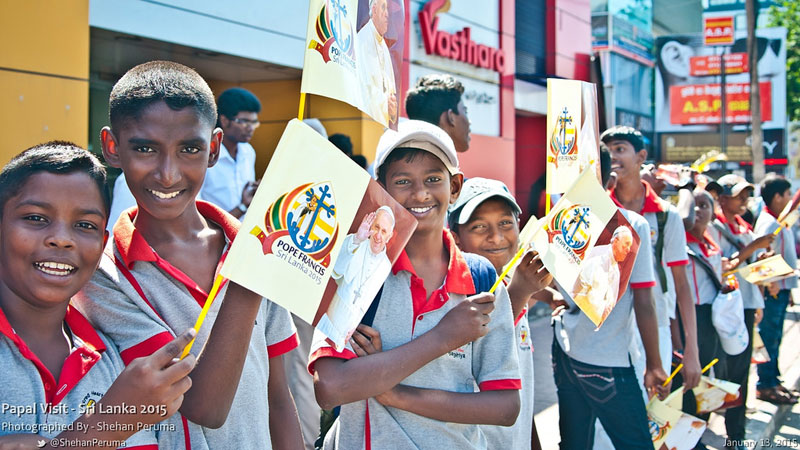 Crowds in Sri Lanka greet the Pope during his tour of Asia (Pic: shehan peruma/Flickr)

Destroying the environment amounts to a betrayal of God, according to a text by Pope Francis.

The remarks – which went undelivered when the Pope strayed from prepared comments – urged young Filipinos to look after the environment, particularly in light of their vulnerability to the impacts of climate change.

“Respect for the environment means more than simply using cleaner products or recycling what we use. These are important aspects, but not enough.

“We need to see, with the eyes of faith, the beauty of God’s saving plan, the link between the natural environment and the dignity of the human person. Men and women are made in the image and likeness of God, and given dominion over creation (cf. Gen 1:26-28).

“As stewards of God’s creation, we are called to make the earth a beautiful garden for the human family. When we destroy our forests, ravage our soil and pollute our seas, we betray that noble calling.”

The Pope addressed young people from the sports field of Santo Tomás University in Manila, the capital of the Philippines.

He told the young people that they were the future of the Philippines, and pressed them to “be concerned about what is happening to your beautiful land”.

The Vatican said the speech remained official, despite the Pope setting it aside after an abandoned Filipino girl compelled him to deliver impromptu remarks in his native Spanish instead.

Around 30,000 people had gathered at the Catholic University to see the Pope, who has established a reputation as a reformist and a defender of the environment. His chosen namesake, Saint Francis of Assisi, is the patron saint of animals and the environment.

There are 80 million Catholics in the Philippines – a country which is still reeling from the impacts of Super Typhoon Haiyan, which killed more than 6,000 people when it made landfall in November 2013.

Francis visited Tacloban, the worst hit city, on Saturday, where he delivered Mass and offered words of comfort to those who had been affected by the storm.

“So many of you have lost everything,” said the Pope, who was dressed in a yellow poncho as he delivered Mass in the heavy rain. He was forced to fly back to Manila early as the bad weather intensified.

While Typhoon Haiyan – the strongest tropical cyclone on record to make landfall – caused unprecedented damage, the Philippines have experienced devastating storms with growing frequency. As the UN climate talks in Lima got underway in December, Typhoon Hagupit struck the island, causing many to evacuate coastal zones.

The World Meteorological Organisation said that higher sea levels are making the impacts of such extreme weather events more severe, as storm surges cause more damage on land.

In comments made to reporters on board his flight from Sri Lanka to the Philippines, Pope Francis said that the “majority” of climate change is man’s fault, and that he had been disappointed at the political response in Lima.

“I think there was a lack of courage. They stopped at a certain point,” he said. “Let’s hope the delegates in Paris [in December 2015] will be more courageous and move forward with this.”

His encyclical on the relationship between man and nature is almost finished, he added, and will be ready in June.