On a tour of Sri Lanka and the Philippines, the Pope made clear he blames human activity for climate change 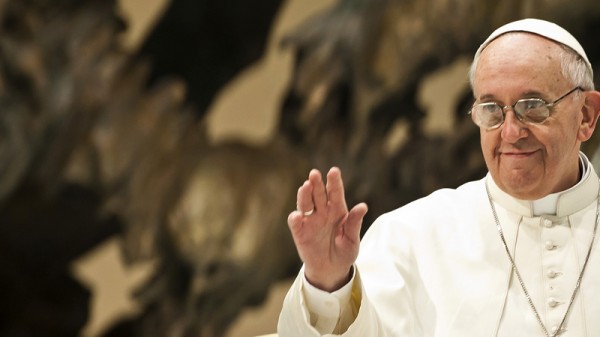 Pope Francis has made a number of appeals to protect the environment since his election in 2013 (Pic: Mazur/catholicnews.org.uk)

Pope Francis has criticised climate negotiators for a “lack of courage” at last month’s talks in Lima, Peru.

As he flew from Sri Lanka to the Philippines, the Pope told reporters he hoped the next set of talks in Paris would move things forward.

He also made clear he holds humans responsible for climate change, Reuters reported, during his tour of Asia.

“I don’t know if it is all [man’s fault] but the majority is, for the most part, it is man who continuously slaps down nature,” he said.

“We have, in a sense, lorded it over nature, over Sister Earth, over Mother Earth…

“I think man has gone too far. Thank God that today there are voices that are speaking out about this.”

He hopes to publish his much-hyped encyclical on the environment in June, he said. This message to Catholics worldwide is expected to focus on “human ecology”, or man’s relationship with nature.

It allows time for his message to sink in by December, when countries are due to agree a global climate deal in Paris.

He told reporters: “The Peru meeting was nothing much, it disappointed me. I think there was a lack of courage. They stopped at a certain point.

“Let’s hope the delegates in Paris will be more courageous and move forward with this.”

Following a few days in Sri Lanka, the Pope is visiting the Philippines. The theme of the trip is “mercy and compassion”, which extends to the victims of climate change.

On Saturday, Pope Francis is due to have lunch in Tacloban with survivors of Typhoon Haiyan, a storm that killed at least 6,300 people in 2013.

Faith and development groups yesterday called on Pope Francis to show solidarity by divesting the Catholic church from fossil fuels.