Obama could see Keystone bill on his desk this month, as Republican controlled Congress pushes for final decision

The US Senate is likely to pass a bill to approve the Keystone XL Pipeline this month, but the fate of the controversial project ultimately rests with President Obama.

Republicans promised to make Keystone, which would take oil from Canada’s tar sands to the Gulf Coast, their top priority when they took control of Congress in 2015.

They have kept their promise, and on Tuesday the US Energy and Natural Resources Committee, now chaired by Lisa Murkowski, an Alaska Republican, will start the process of trying to force a decision on the subject.

Obama has overall authority over whether the pipeline gets built. Congressional action has aimed to change this by removing the need for a presidential permit.

Unlike a previous effort in September, when Democrats dominated the Senate, the bill is expected to pass, but unless it wins a majority of 67 votes – Obama can still veto it.

The president’s legacy is at stake. Keystone is symbolic. For environmentalists, rejecting the pipeline would mean the government was serious about tackling climate change. Letting construction go ahead would mean all the warm words about reducing emissions were merely posturing.

But, says Harvard professor Robert Stavins, his legacy can be seen from various perspectives.

“On the other hand, those people who view the Keystone XL as part of a sensible balanced energy policy and feel it will not have significant net effects on CO2 emissions would probably view it as a political compromise with the left,” he says. 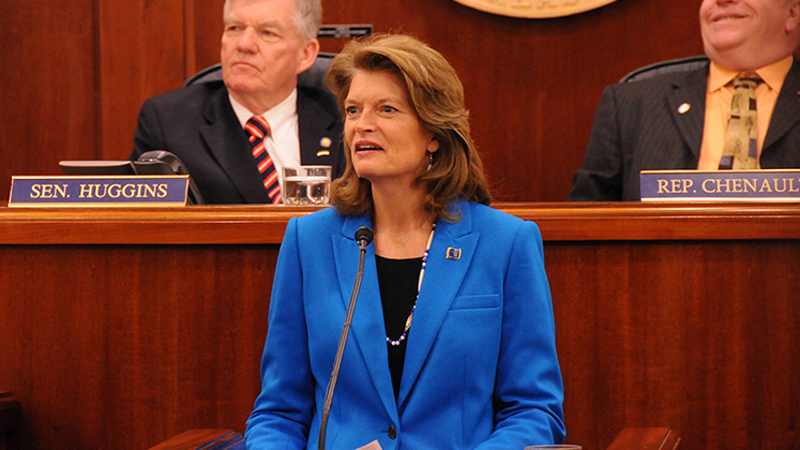 Republican Lisa Murkowski, a senator from Alaska, is leading the charge for Keystone (Pic: Flickr/Lisa Murkowski)

Supporters of the project have chosen a bad time to raise the issue. Yesterday, US oil prices dropped below US$ 50 for the first time since April 2009, and investors fear that a global supply glut and weakening demand could combine to push down the price tag even further.

Nor has there been a verdict from a court case in Nebraska concerning the proposed route of the pipeline. Until the wrinkles have been ironed out at state level, Obama will find it difficult to accept the project even if he wanted to.

This paves the way for him to veto it on procedural grounds – although he could still go forward with it later on.

But, for the new Republican majority, the political kudos that would come with putting a Keystone bill on Obama’s desk is greater than actually forcing the project to go ahead, says Deborah Gordon, director of the energy and climate programme at the Carnegie Endowment for International Peace.

For them, she says, the pipeline provides something of a power rush. It is a physical manifestation of America’s development and its control over resources.

“It could be that Congress doesn’t want to wait, although that might make it more difficult for Obama to veto it on procedural grounds,” she says.

“They might just want to have something that draws them together, their own unified action. And the Nebraska case has nothing to do with the unification of Congress.”

The Keystone XL Pipeline would transport 830,000 barrels of tar sands oil from Canada down to Texas refineries. The difficult process of extracting this type of oil means that it is 81% more carbon intensive than conventional US oil.

Obama has made it clear that he will only approve the pipeline if it “does not significantly exacerbate the problem of carbon pollution.”

And to the joy of environmentalists, he used his end of year press conference to deliver his most negative remarks on Keystone XL to date, dispelling the myths that it would lower US gas prices.

“There’s a global oil market,” he said. “It’s very good for Canadian oil companies and it’s good for the Canadian oil industry, but it’s not going to be a huge benefit to US consumers.”

Meanwhile, although some Democrats are backing the bill, senior New York senator Chuck Schumer has said that there are not enough to ensure the 67 needed to override Obama’s power of veto, and has also urged the president to veto the forthcoming bill no matter what.

“We expect embarrassing results for the Republicans who will no doubt be stymied in this effort,” says Jamie Henn, co-founder of 350.org, which has campaigned heavily against the pipeline since it was proposed in 2008.