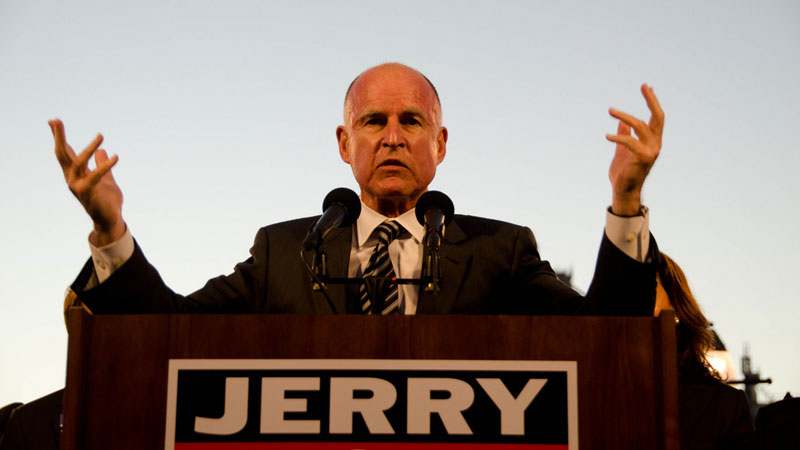 The state should get 50% of its electricity from renewable energy by 2030, he said, as he was sworn in for an unprecedented fourth term.

He also proposed to reduce the use of petrol in cars and trucks by up to 50%, double the efficiency of existing buildings and make heating fuels cleaner.

Speaking as he was sworn in for a record fourth term in office Brown said he wanted to cut emissions from carbon, methane and other pollutants in the USA’s most populous state.

“How we achieve these goals and at what pace will take great thought and imagination mixed with pragmatic caution,” he said.

Brown said he plans to achieve the target by introducing more solar panels on rooftops, battery storage and millions of electric and low carbon vehicles – a package that will require “enormous innovation, research and investment”.

California has already established itself as one of the most ambitious US states on climate change.

In 2006, it passed the California Global Warming Solutions Act, which was signed into law by previous governor Arnold Schwarzenegger.

This forced the state to bring its emissions back down to 1990 levels by 2020 – a reduction of around 15% below a path of no additional action.

Brown said that the government was well on its way to meeting that target. Progress has been helped by a pioneering cap and trade system that has created a market for carbon emissions.

“Taking significant amounts of carbon out of our economy without harming its vibrancy is exactly the sort of challenge at which California excels,” said Brown.

California is not immune to the impacts of climate change. A severe drought led Brown to declare a state of emergency in January last year.

“I thought that he was trying to temper a very bold vision with an awareness of the needs of effectively bringing things about. So I thought it was a really strong speech. Genuinely.”