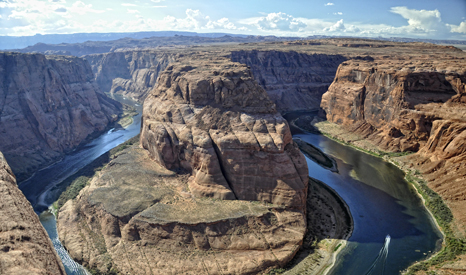 Groundwater that supplies millions of people in the southwestern US is drying up, scientists have found in “shocking” results.

As California faces one of its most severe droughts ever, new satellite data shows that groundwater loss from the Colorado River Basin threatens its water supply.

US president Barack Obama has cited the drought in support of the case for tackling climate change.

According to the latest research from NASA and the University of California, Irvine, the Colorado River Basin has experienced its driest 14-year period in the last century.

It lost nearly 65 cubic kilometres of freshwater  between December 2004 and November 2013, of which three quarters was underground. The total is almost double the capacity of the country’s largest reservoir, Lake Mead in Nevada.

Data from a NASA satellite revealed the losses were worse than previously thought. By measuring the gravitational attraction of the region, scientists calculated changes in water levels, which they said gave a more accurate picture than relying on well data.

“We don’t know exactly how much groundwater we have left, so we don’t know when we’re going to run out,” said Stephanie Castle, the study’s lead author.

“This is a lot of water to lose. We thought that the picture could be pretty bad, but this was shocking.”

Some 40 million people across seven states depend on the Colorado River for water. It also irrigates four million acres of farmland.

“The Colorado River Basin is the water lifeline of the western United States,” said senior author on the study Jay Famiglietti.

“With Lake Mead at its lowest level ever, we wanted to explore whether the basin, like most other regions around the world, was relying on groundwater to make up for the limited surface-water supply. We found a surprisingly high and long-term reliance on groundwater to bridge the gap between supply and demand.” 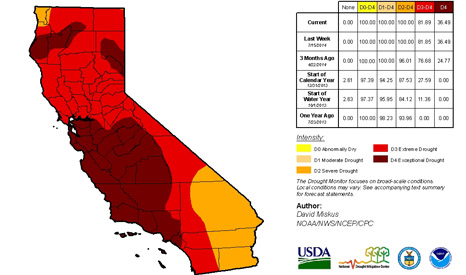 Much of California is facing “extreme” or “exceptional” drought
(Source: US Drought Monitor)

It is bad news for states that are already pleading with residents to save water.

The Californian government even drafted in pop star Lady Gaga to issue a public service announcement.

The arid conditions have also sparked a rise in wildfires over the past decade, which are costly to contain.

This latest evidence of water scarcity reinforces the message of a US government National Climate Assessment.

Published in May, it said: “Climate change, once considered an issue for a distant future, has moved firmly into the present.”

These impacts on US citizens have pushed climate change up Obama’s agenda.

On a visit to drought-hit Californian farmers in February, he said: “A changing climate means that weather-related disasters like droughts, wildfires, storms, floods are potentially going to be costlier and they’re going to be harsher.”

That supported the case for action to “combat carbon pollution”, he added.