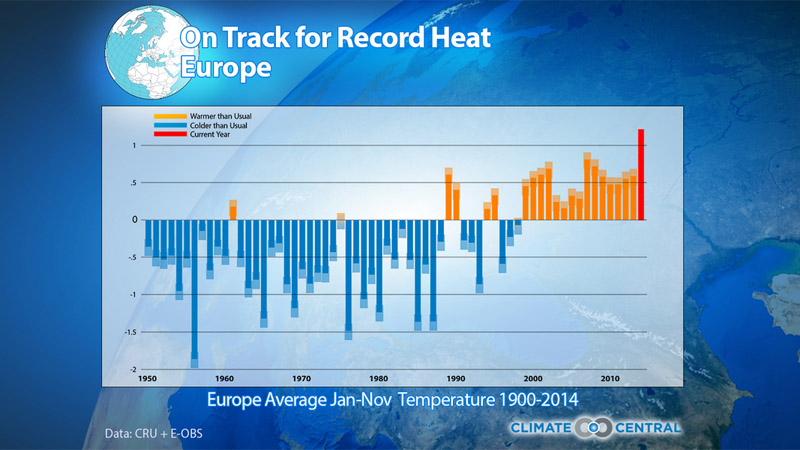 Scientists are increasingly certain that 2014 will be Europe’s hottest year in the last half millenium.

In a study that will place extra pressure on efforts to develop a UN treaty to slow greenhouse gas emissions, a team of researchers at Oxford University found warming of the Earth’s atmosphere and oceans had boosted the odds of a year as hot as 2014 by a factor of 10.

Experts at the Royal Netherlands Meteorological Institute (KNMI) and the University of Melbourne, using different methods, found the chances of hitting record-breaking temperatures had risen between 35-80 times.

“In the early 1900s, before global warming played a significant role in our climate, the chances of getting a year as warm as 2014 were less than 1-in-10,000,” said Geert Jan van Oldenborgh, a climate scientist at the KNMI.

Scientists used early weather records and data from tree rings to calculate Europe’s temperatures back to the 1500s.

While there are still two weeks to go until the end of 2014, the cumulative effect of months of above average temperatures mean scientists are increasingly certain the year will break records.

Earlier this month the World Meteorological Organisation said figures from three leading data sets show the year is likely to be the hottest in history worldwide.

“There is no standstill in global warming,” said its chief Michael Jarraud on the sidelines of UN climate talks in Lima, Peru.

According to the National Climatic Data Center in the US, there has not been an annual global cold record set since 1911, and nine of the 10 hottest years recorded worldwide have occurred since 2000.

Researchers are increasingly confident in their ability to link extreme weather events to climate change, a development that could strengthen calls for vulnerable communities to be compensated from countries with high rates of historical carbon emissions.

But speaking to RTCC on the sidelines of UN climate talks in Lima, Kate Willett, a scientist at the UK Met Office in the climate monitoring and attribution group stressed that longer-term data is vital to work out what is happening to the planet.

“Is 2014 the warmest on record? It’s not so important. Actually, collectively the last 14 years have been part of the 15 warmest years on record.  That is a much stronger statement,” she said.

“The year itself is not that significant but take it in the context of the larger period… we’re really in the warmest period since the 1880s.”

A warming atmosphere is likely to lead to an increase in heatwaves, droughts, flooding and rising sea levels, according to the Intergovernmental Panel on Climate Change, a UN-backed panel of experts.